[ The third and final winner of the Create Your Own Atrocity contest, alongside an original illustration by John Dermot Woods. Thanks again to all the entrants! In the meantime, consider picking up a copy of John’s novel, The Baltimore Atrocities, if you haven’t yet! – ed.] 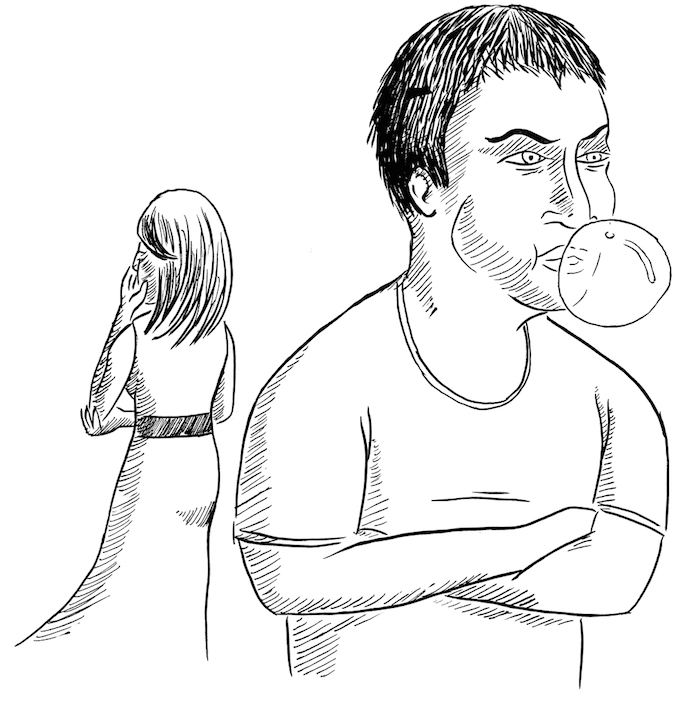 Preston Mitchell was sent flying off his Kawasaki Ninja, a style of motorcycle commonly referred to as a “crotch rocket,” after colliding with an open car door. Better known to his fans as “Razyr Rydyr,” Mitchell had become a YouTube sensation for his rides through heavy rush hour traffic at up to 130 miles-per-hour, which were captured by a camera mounted on his handlebars. Justin Portilla said he opened his door while idling in the deadlocked traffic because he wanted to spit out his gum. Mitchell would eventually land on the roof an F-250 pick-up, over 60ft from where he’d been dislodged from his bike. Though his neck was broken on impact, witnesses on the scene reported he was able to make a variety of facial expressions and gargling noises. One can only speculate if he would still be alive today had the paramedics not been hampered by the severe congestion of rush hour and been able to render aid sooner than their response time of about an hour-and-a-half. Weeks later, after learning that he had been arrested for attempting to solicit sex from an undercover officer, Portilla’s wife came forward to the police with her opinion that the collision with Mitchell was no accident. She explained that they’d often see “Razyr” riding around their area of town and that Portilla had stated more than once that the stuntman should be in jail for endangering the public, and once even proclaimed, “if he ever tries that shit near me, he’ll wish he’d put on a helmet before leaving the house.” She also said his stated reason for opening his door couldn’t be true because he’d given up gum years ago on the advice of their family dentist. Detectives had a collision expert review the crash scene pictures, and she determined the damage to the handlebar camera could not have been caused by the wreck alone and that it appeared to have been stomped on multiple times, ensuring no footage could be recovered. Portilla has begun the appeals process from Huntsville Federal Penitentiary, where he is serving out his term of 35 years, the standard sentence for voluntary manslaughter in Texas. His appeal claims that he’d recently taken up gum chewing again, citing a newfound live-and-let-live attitude.

Upon returning to Texas State University after winter break, eager to begin Spring classes, freshman philosophy major Charlie Rosa began finding post-it notes hidden throughout his side of the small Arnold Hall dorm room he shared with his best friend, Derek. The notes contained existential quotes like, “Life has no meaning once you lose the illusion of being eternal,” and simple questions like, “Why?” Charlie never suspected Derek, even though he was the only other one with access to the room. They had been best friends since middle school. Halfway through the semester Charlie no longer saw the point of attending class or going to parties. He spent most of his time at the buffet-style student dining halls located throughout the campus, finding the immediate pleasure of binge-eating the only pursuit worth his time. Derek supported his friend’s choices and told him college was for experimenting with different ways of living. Upon returning to the dorm one afternoon after a particularly gluttonous trip, Charlie found Derek hanging from the ceiling from a noose improvised from his bed sheet. He was shocked to see a stack of post-it notes on Derek’s desk and a list of Nietzsche quotes pulled up on his computer. Charlie loosened the noose and lowered his dead friend onto the bottom bunk. Devastated by the loss of the only person he felt close to, he stepped up on the chair and fit the noose around his own neck and kicked the chair away. He immediately fell to the floor, the ceiling unable to hold him and his recent massive weight gain.

[ As a baby, Drew Buxton was found abandoned in a field of bluebonnets during the hottest Texas summer in history. He writes fiction, essays, and poetry, and his work has been featured in Vice, Hobart, Fanzine, Revolver, Atticus Review, and The San Antonio Current among others. He is at work on a novel. ]