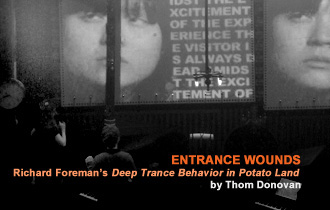 Inintiating the Q&A with Richard Foreman after the Tuesday, March 4th performance of Foreman’s Deep Trance Behavior in Potato Land, New York Times critic, George Hunka said, “I have a problem with Richard Foreman’s plays.” Hunka qualified this statement by saying that while he always created a narrative for himself when experiencing Foreman’s works, he never felt that such a narrative was given, or determined by the director himself.

Hunka’s comment (albeit paraphrased) is strange, and clearly the comment of a devil’s advocate, insofar as Foreman’s Ontological Hysterical Theater has always complicated action-driven narrative theater in order to deal with theatrical forms, effects and texts. As the Ontological Hysterical Theater’s name suggests, Foreman’s theater is a theater of ideas, of “onto-” and not “psycho-” drama. That Foreman would eschew psychology for ontology gives me hope for contemporary theater, and also makes me bitter that ontological theater is not better supported by our current cultural economy, which tends to privilege narrative over experience, psychology over ontology, character over type or gesture, and cause over effect. Such is the burden of the twin legacies of method-acting and Aristotlean catharsis, a climate that hasn’t ceased to persist, despite the ongoing influences of Beckett, Brecht, Artaud and, more recently, Foreman in contemporary performance.

I have only seen two Foreman productions since moving to NYC two years ago, but both attest to the exigency of ontological hysterical theater. At last year’s Wake Up, Mr. Sleepy! Your Unconscious Mind is Dead!, I was struck by how Foreman was doing everything he could to overcome typical theatrical devices and trappings. Sight lines (those perspective lines that provide the illusion of vanishing points in and on a stage) were hung deliberately across the audience’s line of sight, literally cutting through the audience’s perception of the stage, as well as directing the eyes to arbitrary perspectives (many of the lines led to vantages across the walls of the theater and upon the stage). Likewise, a clear, plexiglass wall stood before the audience, mediating a fourth wall so that the audience was reflected in it—a moment of “theory” (what can be seen through speculation, and thus reflection). As a friend more versed in the theater put it, these sight lines allegorize the lines of the Fates being cut, severing an audience’s ties with an ancient theater of fatal actions and visual identification. Following Brecht’s aesthetics, Foreman’s theater not only interrupts the audience’s identification with characters, but also with naturalistic environments.

In Wake Up, Mr. Sleepy Head!, Foreman used his actors gesturally. Although the actors had very few lines, they were deliberately blocked. One of the principle actions of the blocking had the actors point repeatedly at different objects on the stage. This pointing, like the sight lines, had everything to do with the viewer’s vision, and the way the eyes direct and shape attention. Likewise, this blocking found a way to have the audience attend actions “off-stage”—a politics of war (Iraq, Iran, North Korea) far away, and yet brought home by the fact of certain props, such as a fighter plane hanging from the ceiling, and the occasional sound of ammunition rounds in the soundtrack. While the fighter plane waged its war in the “sky” of the Ontological Hysterical Theater’s black box theater, Foreman’s actors pointed at twin video projections on the back wall of the theater, negotiating pre-recorded actions and text with actions and text in “real time.”

Throughout Foreman’s Q&A, the director used numerous metaphors to describe his process, likening it to a musical composition, whereby different elements or themes find themselves “woven” within a “compositional field”. He also spoke of his texts in terms of “resonance”. To use text as sparsely as his theater tends to nowadays (Foreman was more “line” based in his earlier works) is to build upon words, phrases, and sentences that have a certain gravity and therefore produce echoes, bordered by long silences in the “script,” as well as among sound and visual media events. However, Foreman admitted to having “the story in his head” all the while he is directing. This holding the narrative in his head is different than actually narrating, where narration proper risks providing a work that can merely be understood, and therefore not felt or experienced as something occurring—a “happening” or event dynamic. The consequences of Foreman’s theater, in this way, are to open a space for events as they nourish the imagination and consciousness as forms of thinking.

In Deep Trance Behavior in Potato Land, theater is a physiological experience as much as a psychological and intellectual one. In fact, Foreman, more than almost any artist I am aware of, closes a crucial gap between the “physical” and “intellectual” through a synaesthesiac blending of multi media elements (video mainly), lighting (flashing bulbs embedded in the video projection screens and bright intermittent stage lights), and soundtrack (machine-gun-like sounds, orchestral and “trancy” music, and text spoken by actors on video). Through this particular synaesthesia, Foreman does not so much build upon narrative attentions, as bodily and phenomenological states. At moments I found myself actually going into “trance,” or a state I imagined to be that of trance. It was not so much as if I was dreaming, as that I could feel acutely my attention wandering. When I had finally succumbed to this more general state of attention, bright stage lights would come on, or synthesized artillery-fire would issue in the soundtrack, bringing me back to a more focused attention.

Foreman’s art is an art of attention and distraction and of the consciousness that plays between attentive and distracted states of awareness. The definitive “dramatic” moments of Foreman’s plays are those where sensation (feeling one’s self a part of the world) and nonsense (feeling one’s self withdrawn from a world of sensual experiences) become suffused, chiasmic (cross-mixed) and indivisible. The provision of this experience is what I consider Foreman’s primary contribution to an ongoing (however stunted) exploration of what the theater can do beyond character development, pathos, and teleological narrative-actions—actions based on cause less than effect, end more than pure means.

Of the more obscure elements of Foreman’s theater are those appropriated from Jewish mysticism, culture and religious practices. These elements are present in Foreman’s Deep Trance through a cabinet on the right side of the stage which is used by the actors as a kind of tabernacle, a covenantal space; likewise through Kabbalistic Gamatria (Jewish mystical numerology), which appears in the video opposing chronos (chronological time). At the risk of trying to pin down these mystical motifs and elements, which are only part of the vast pool of imaginative materials Foreman draws upon, I think these elements point to a larger problem of Foreman’s theater: that he is probing mystical “truths” as they can be explored and experienced through aesthetic facts, materials and phenomena given by theatrical works.

In relation to Gamatria are the videos themselves, which chronicle different actors performing various actions in three different geographic locations: NYC, London, and Japan. Though these actors are geographically and culturally displaced, they correspond through Foreman’s overarching sense of “no place,” that the experience of the theater, of theater as a gestural text both felt and thought through, is of no where [sic] and no body [sic]—without embodiment or place per se. And this is ontological. Which is to say, Foreman’s theater is an experience of what the literary philosopher Walter Benjamin called “non-sensuous similarity.” Semblances that can only be felt in thought, as thought is given by varying degrees of awareness, vision, and illumination. To feel these similarities is to feel the mind itself as it is shaped by sense-experience and deprivations of sense.

Throughout Deep Trance, Foreman’s actors nod at various forms of extreme experience: the actors put Smarties candies on their tongues, imbibing them as though they were tabs of acid; one actor intones “me and my shadow” calling forth the “shades” of ancient and Medieval theosophies; on the left and right walls of the stage are “spirit photographs” (19th century photographic portraits of actual people double exposed with “otherworldy” presences) and gold-painted masks (masks of transmigratory movements? the Bardo journey of Eastern mystical practices?). I am drawn to all of these details of Deep Trance as they interpolate Foreman’s audience as “undead,” where one experiences undeath both through mystical experiences and psychedelic ones, as well as the nonsensuousness of thought as an experience of interiority deprived of outside data, given to neural activity in and of itself.

While I believe Foreman’s theater to provide principally the experience of “no body,” a bodily awareness “cancelled-out” by thought, dream, and chemical simulation alike (and hence the appearance of “X” and “NO” in the videos of Foreman’s past two productions), it also points to ways that nonsensuous experience is involved in a political-ethical imagination. During the moment when I most felt relieved of my “regular,” waking-consciousness during Foreman’s Deep Trance, one of his actors walked on stage with a costume mostly hummingbird, and part tank. On the hummingbird-tank’s beak was blood; on its breasts, flags of the United States and UK. Among all the visions of Foreman’s Deep Trance, I think of the hummingbird-tank as an irruption of the real, peeking out at its entranced viewer. And it is to such visions of this world that Foreman’s drama would wake us, if only to draw us back into other worlds of dream experience, hallucination, and a distracted consciousness.