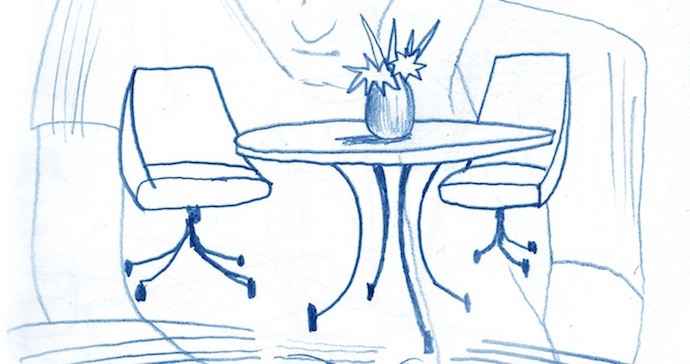 She had never intended to get into erotica.  It had been incidental, much like her actual field—interior design—yet she now realized that the odd pattern of the random sometimes yielded desirable outcomes.  She knew about dinettes, for instance.  Even the plastic, roof-of-your-mouth nature of the word, “dinette.”  Tinny in its sharp pliability.  She was even more interested in the bisected, colon-like angle of a sectional than anything to do with the human body.  The actual human construct of the body seemed sagging, its enjambments accidental—nothing laid out intentionally—and don’t even THINK about telling her this was the majestic, to-the-molecule design of some higher creator.  The baroque placement of colon was just the result of too much organ and too little space.  Easy.

It made her think of her grandmother, who she had seen die, actually die, when she was around five years old.  The woman had just passed out somewhat unnoticed in a large ceramic bowl of Fruit Loops during a Sunday brunch, face first, with no one coming or correcting or even giving the proper morbidity-information for hours on end while she just sat there and continued eating.  Eventually, though, a neighbor had come over and screamed.  It was hard to tell whether it had been the neighbor’s original scream or her secondhand scream that had alerted the other neighbors and begun the actual chain of proper consequential response.  Regardless, overall, she was not a “people” person, nor was she interested in making images that somehow tied into the currency of humanity to serve itself, like shit, back into its own physical needs.  As discussed, the slippage into art had been accidental.

It was then something of a bizarre occurrence when pictures of her job site had leaked to an upscale and somewhat cryptically defined interior design / contemporary living magazine.  The pictures themselves were unassuming, perfunctory.  They were simple in and of themselves.  All the usual perspectives, for her own recollection: the under-the-table images of chair legs, the somewhat birthing perspective of a vase peering out from twin wedges of oak, the overhead scan of a complexly arranged living room.  It was mainly so she could reconstruct the environment near exactly after she had gotten back to the office.  Near exactly.  It was like when people said books were so detailed in their whole setting or city described that if that city was destroyed it could just be built again from the description alone.  She had never thought of her work in such a detailed way, or of the detail being conscious.  They were just ways of documenting her work that appealed to her.  She never even showed them to anyone, just kept them in a sort of private scrapbook which she would occasionally peruse for new ideas, trying to revitalize from old matter.

But somehow, the pictures had gotten out.  A gallery operator had called out of the blue one evening as she was at home having a chamomile tea before bed, asking her if he might see “what else was in the portfolio.”  She didn’t know what portfolio he was referring to.  He seemed slightly irritated, but went on suggestively saying that, you know, it would be quite easy to slip some extremely difficult-to-obtain textiles her way if maybe she’d let him in on the ground floor by selling an early work on the cheap?  That he could keep the secret, and maybe she’d even let him in on something other people might not know about, something from a “lost” or obscure period?  She still didn’t know what he was talking about, and told him so.  He told her he had picked up the magazine the pictures were in, a type of magazine he assured her he normally would never get, wasn’t that sort of person, but had been “moved” by even the cover image while at the newsstand.  He offered to drive over and show her the magazine in question.  He was quite adamant.  She declined but then, unable to go to sleep, drove to an all night magazine rack in Westwood and purchased the magazine he spoke of, not resting until she had passed the crumpled bill into the newsstand operator’s hand, transacted the object, and raced home to pore over the thing in detail   She saw the pictures before her, reformatted, reorganized.  She had the mixed dread and titillation of seeing oneself in a pornography magazine one hadn’t remembered posing for.  They were all under an ambiguous headline in suggestive font called “Room for More.”  The magazine itself was called Interiors, though there was a sort of pulpy feel to the cover that wasn’t the same as, say, Sunset, or Dwell.  An advertisement on the page opposite had a woman’s lower half facing the viewer, full-moon style framed by jeans, shellacking an already polished hardwood floor.  She looked more intently at the article.  She reflected that she hadn’t even known how her pictures had gotten to the magazine, didn’t even recall in particular the shoot they were from.  She thought it was perhaps from the owners of whichever place seeking to falsely drive up the sale price, maybe the ignorant intern she had let color-correct the images—but the odd part was it was a few seemingly selected intentionally, put in a series.  This in itself was off-putting enough.

Then she received a call from a Santa Monica gallery trying to organize some sort of retrospective on “Lusting for the Banal.”  A young, but uppity, gallery secretary was telling her in a voice she could only think to describe as acne’d, about the inherent “phallic” and “denuded” qualities of her art.  He continued on uninterrupted for quite some time in a tone she would later associate with “Art History People” about the “essential sterility” of her work, that—in what she thought was quite the statement for someone she’d never met before—people were “damn near pleasuring themselves to the things she had shot, actually literally pleasuring themselves.”  He mentioned someone called Ed Weston, something about “veins” in “ceramic,” which upon looking up, she felt confused further.

Then the letters started coming in, the envelopes greased, the documents inside cramped claustrophobically with tiny handwriting.  People talking about the “seductive,” “serpentine” contours of an evening table she had shot from below.  A few suggestions on the phrase “shot from below.”  A discussion of a table’s “wooded utters.”  Another on how someone wanted to spread some kind of seed on the “porcelain and cherub face of a freshly washed sink,” then an apology afterwards for the statement.  She couldn’t even make heads or tails of what the apology was meant for, or what any of it meant.  It seemed ludicrous.  She avoided her mail, but somehow when one would come in she would have the sinking and hot feeling already knowing, somehow, what the envelope contained.

Phone calls began to come in with increased frequency from enthusiasts.  She wasn’t sure whether they were anyone in any professional capacity, or just lone zealots somehow moved from their lethargy by the bizarre motivation of her still images she had now, herself, forgotten.  People offered her money to speak at their personal engagements, at galas, at small conventions for those who “desired the life-giving ether of the non-living,” as one pamphlet described it.  She couldn’t understand it.  In a minor way her original images, unlicensed at first but then registered in an ill-informed flurry at the copyright office, sold at private auction for a number she couldn’t help but bewilderingly agree to, were now featured in small but “prestigious” galleries around Los Angeles, the windows blacked out, the promotion materials suggestive and elusive even to her.  People would send her pictures of dildos, shot in sodium lithograph, striated and still, looking like elongated and ornate Russian dolls.

She lay at night looking at one, attempting to divine the shapes that people assumed she could see.  She looked deeply.  There were no chairs, there were no layouts.  There was only a pronounced ridge attempting to hold and fixate some sort of pleasure, irremovable.