Being Sized Up by Samantha Crain’s Kid Face 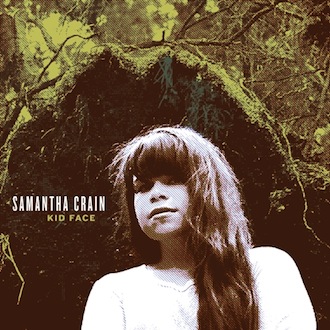 The best of fiction slowly reveals itself to be purposeful, and Samantha Crain knows this. At college, the Shawnee, Okla., native was studying poetry and short stories––N. Scott Momaday’s In The Bear’s House and Erskine Caldwell’s Tobacco Road were favorites––when she learned, then embraced the troubadour lifestyle that Woody Guthrie and Ramblin’ Jack Elliott led. She wanted to travel, perform and chat up whoever she met. She played at coffee shops with hopes of leaving Oklahoma, and with her cavernous alto on tow, she did.

Those hopes led her to the Midnight Shivers, her backing band in 2009’s Songs of the Night––a soulful effort fueled on a singalongs. Those same hopes were dashed after the Midnight Shivers disbanded, but then renewed when Crain picked up an electric guitar, learned to wail and wrote about 16 people she met in 2010’s You (Understood). In Kid Face, thanks to yet another stupid breakup, Crain lands on where she’s danced around until now––herself. And as the album (produced by John Vanderslice) shows, Crain has learned that every piece of autobiographical writing can manifest itself into a wonderfully terrifying act of self-acceptance.

Perhaps this is why Crain gives away the ending from the start. In introduction “Never Going Back,” to percussion mimicking the sounds of clopping, the singer-songwriter ticks through her grievances––”He leaves me thirsty, leaves me dim / I’m looking at a picture of him and his pride”––before strings sigh and her titular declaration tumbles out. In this minimal modern interpretation of Americana, Crain works to ensure throughout Kid Face that her words and music build momentum together, so her emotions cannot possibly be misinterpreted.

Other moments plummet to the beginnings of ends, times when Crain cannot break free. In “For the Miner,” a weary Crain offers “a window that faces the sun and golden ocean” to a partner trapped in depression, as if anticipating his rejection. “We’ve Been Found” details the morning after a lengthy argument, and when she traces through retractions and compromises (“I’m not mad, I’m conflicted / You’re not bad, you were lifted / from yourself, with your lamb-like heart”), she sounds both tender and wounded.

Over the course of any long-term relationship, the scores of arguments, resolutions and faults can blur together into an anger that barely makes sense. In contrast, the best parts of Kid Face arrive when, from just a few conversational points and artifacts, Crain can convey weeks, months, a year of pain with remarkable clarity.

Crain used to mask her darkest revelations with singalongs (Songs) and chase them with electric guitar solos, acting as her own Nels Cline (You). But to match her stories,  Kid Face is Crain’s music at her most direct. “The Pattern Has Changed” is a slow awakening, in which each of her sentences require 10 seconds to tell and piano chords fill in space in which Crain has to collect herself, how it feels to be blindsided. In “Churchill,” she breaks down her past to a steady beat––”So blame me for what I cannot finish, my whole life I thought I was an opportunist”––before she breaks down her pride, and her backing melodies wash over––”but I’m not.”

Kid Face‘s one flaw is “Sand Paintings,” a slower take to a Western shoot-off theme that ultimately drags through Crain’s self-defeat. It’s a rare moment in Kid Face that inspires restlessness without necessarily depicting it, although as Crain has proven with every album, even years of setbacks can be instructive.

Crain has said that, even at one EP and two albums in, writing Kid Face felt like a breakthrough––and no song depicts this better than the title track. To slightly jittery strumming, Crain paces through this wasteland of cancers and dancers before she positions herself. “Oh, I still got a lot of fight…” she sings. Then, she lowers her voice––”…before I settle down.” This is Crain striking a deal with herself, the warning growl before a loud bark, sound advice to never underestimate her.

Kid Face is available through Ramseur Records and iTunes.