Connected at the Skull 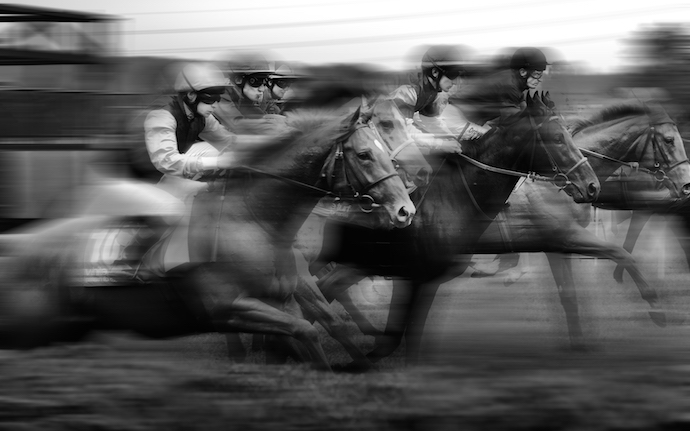 Larry washed Secretariat’s sheath decades before endless operations, before cocky plastic surgeons sculpted him into Larry—carving feeble shell into stone and steeple—new cathedral to release the soul within. Larry’s old man owned a barn behind Meadow Stud, smoked thirteen grams of cocaine weekly. Blow made him stronger. Born on a bale of hay, binge of bursting soulless stardust, Larry will never die.

Nobody imagined I would give birth to a baby with two heads. Larry lost in the illimitable skulls of my seed. One face resembles a crippled racehorse begging for a bullet.

Hoarse voice of the dwarf inside my head drowns out all the others.

Sometimes people ask us why the twins are Siamese, as if we ordered Kung Pao Chicken or a Double Whopper with cheese. Apparently, they crave General Tsao’s. Weird glances at Larry circle the track. Gamblers maddened to hear rumors refuted from the horse’s mouth. Degenerates sought the trifecta, hoping Larry would carry “a three-headed ogre” ushering luck to the grandstand.

“Returning to the races was worse than the day they were born,” Larry says. “Two heads weren’t enough for the guys.”

Puffing Marlboro Reds in the snow stained by exhaust and tears outside the emergency room, Larry licked a wrinkled Iron Maiden sticker and the Chinese surgeon swaggered outside to yank his tongue from the metal flagpole.

“What should we put on the birth certificate?” Larry asked.

The nurses tried to talk us out of it.

Bulbous nipples, hemorrhoids bleeding into porcelain eternity, our Siamese twins study every gesticulation. The room fills with farts and fireflies.

“Look what we did,” Larry says.

We created the most humongous Siamese monster ever recorded. Nurses shuddered in horror, huddling in empty janitor closets, cots soaked with sweat. Gossip oozed around the hospital.

Larry looks puzzled, shocked, amazed—struggling to put the jigsaw pieces together—bobbing with beautiful inertia of stallions—we race toward the finish line. Larry fingers his scalp where labyrinthine scar tissue bubbles: result of his collision with the cold linoleum upon seeing bloody Siamese skulls.

Donations poured in. Dr. Jerry scheduled the operation for Cinco de Mayo. It was too risky for us to go through with it. Their brains are locked together. Months wore on, years now and the heads keep growing. They might survive ’til their teens, maybe become the first centenarians—nobody knows. I watch them staring. Larry’s eyelids clench. We’re approaching the finish line. The heads tilted, jilted, moons unfurling into winking spoons of Ketamine and furloughs.

The twins are on top, riding Larry. They watch as I yank them apart by the skull.

Blood and bones and screaming, though for the first time ever—they’re smiling—we’re smiling—wet worlds whirling from rising souls.