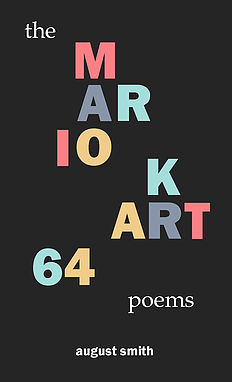 The Mario Kart 64 Poems begins like this, feeling out the tracks and testing the weight and speed of the kart. Then, the book starts hugging curves, flying through the air and landing perfectly. It speeds up and blows by.

The book is a fragmented hybrid text, feeling all at once like esoteric poetry, personal essay, and fictional video game narrative. It was written for Mario Kart players, as the dedication even states, “for my five brothers, the other players.” Each genre works together seamlessly, as if the reader simply hits the on switch and is transported from this reality to game reality. Smith’s use of indented paragraphs and interspersed bits of dialogue leave the reader wondering if there is even a difference between poetry and prose. Form shifts and so does point of view and time. The book captures the experience of gameplay as well as the way the mind drifts while playing.

Just as in Mario Kart, the reader races through different levels and different championship cups. Each piece works alongside an image of a different track near the bottom of the page. Even though the reader races through each piece, there is also an inevitable contemplation of the world. Each cup feels less and less like competition, and each text leads to larger conclusions, as if meditatively looping reveals truth.“When I am in charge, I’ll banish trophies. I’ll build them out of snow and they will quietly crumble in the victor’s hands and the victor will finally understand.”

“Be swallowed by the endless digestion of the track.” As the races become more challenging, the writing becomes more complex. Reality and simulation blur together. “We will never leave this place because there is nothing beyond here.” Point of view is multiplied and multi-layered. There is the player and kart onscreen. There is the player in reality. There is the player in the past. Finally, there is the reader. The point of view collapses, pulls out, changes, speeds, and slows. The lines feel as though they are about all of these levels of existence at once. Simple statements seem to radiate truth about each level of existence and the characters in a similarly expanding/collapsing way. “And there is nothing inside. And this is true of everyone who visits this reality. I think.”

Loneliness and love enter the poems in interesting ways. The first appearance of a female character occurs in the poem “Kalamari Desert.” The character is frozen, always watching the gameplay but never interacting with it. “She is static afterthought.” The next poem introduces travel metaphor as a common way to relate the concept of love. Although we have heard these more common metaphors before: “this relationship has gone off-track, or we’re spinning our wheels, or we’ve hit a rough patch, things are getting rocky, or we should go in our own separate direction.” Smith takes these clichés further by using the surrealism present in Mario Kart world to discuss love in an even stranger new way. “I want to encircle you like a ring of emerald turtle shells, vigilant, deadly, letting no one come too close.”

Near the end of the book, the reader is led through “Sherbet Land,” which is the longest and perhaps most unique piece in the book. A female character appears as a player in physical reality. However, a penguin character near the track begins speaking to this woman, explaining the history of the game to her. “’The answer is that this is Sherbet Land. It’s literally all that there is. To conceive of something beyond this is impossible. I’ve been here since 1996.’” There are garbled glitches on pages where “Mario Kart” is said. The glitches are interesting in that they can be interpreted in so many ways. Is there just a glitch in the character’s dialogue due to wear over time? Is saying the name of the game the same as admitting the game is not real? Is the Mario Kart title some kind of tear between realities? “The sky transitions, maw-like, to the color black. There are names, numbers, rankings. The woman tries to read them but she can’t make sense of the words.”

The woman, at first reluctant, is taken over. She changes and becomes part of the game. She bleeds. Grows metal and wheels from her spine. She is taken into the sky and captured. “Her entire vision is consumed by it.” Gender is complicated here as well, as the female player is automatically the princess in the end. This naming seems like an ominous death sentence signified by all caps. “DO YOU UNDERSTAND, PRINCESS?”

Great ekphrasis adds something new & interesting to the art already in existence, rather than simply describing another piece of media in written form. The Mario Kart 64 Poems definitely add something new to the game. Because Mario Kart is taken so seriously, we as readers are asked to contemplate Mario Kart in a way we most likely have not before. Each loop is a path to the past back to the present. The writing is both playful and at times grotesque. This book is not only about video games; it is also about memory and how the past can slip in and out of the conscious mind. The shift can happen in an instant, between paragraph/stanza breaks, or as you watch another player pass by.

Cool Skull Press, a fairly new press that has released several other titles about video games, published this beautiful little book. The book design is very fitting. It comes perfect bound, with a black matte cover, which spells out the title in a very colorful and fragmented way. The design works so well with the content of the book. I can’t wait to read the rest of the books released by this press. If you are a fan of Cartridge Lit, these books should also definitely be on your video game loving mind.