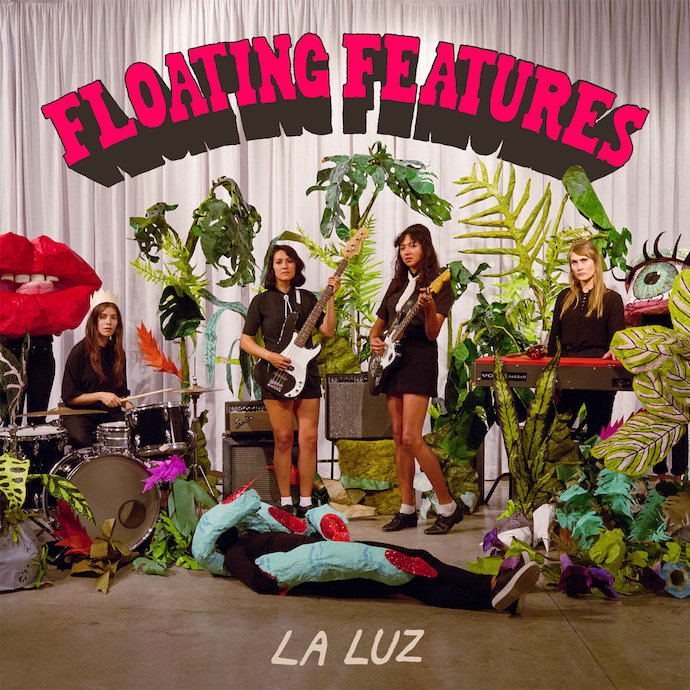 These fragments are the remains of songs.
Sappho did invent the guitar pick,
but she did not play rock & roll.
The Sun King is Helios or Apollo.
Louis XIV is a pretender. Sun King / I mean /
To make you stay with me sing La Luz.
Ancient scholars, like modern ones, had a tendency
to identify all first-person speakers in Sappho’s poetry
with the poet herself and to read her work autobiographically.
Who knows me knows I will go sing La Luz,
who left Seattle for Los Angeles.
The fog creates this filthy mirage.

Affect is distinct from mood, tone, atmosphere and texture, but these are neighboring fields in a soundscape. Or let’s call it ecotone, to stay within scenic metaphors, where ecotone describes overlapping but distinct ecologies, or the transitional areas between biomes.

As ever when we listen to music, we are on the verge of dreamscape. Music may call us to escape in dream—or imagine other futures, other possible presents, other ways of being; and music may call us to wake up from a dream that prevents us from seeing (and being in) some reality, present or emergent.

Music does this before it mentions the dream. And when it does speak the dream, this linguistic excess might abet or betray the ecotone. My book Trouble Songs considers music that may or may not include the word trouble, though “trouble”[2] is evoked. And though a Trouble Song may or may not include the word trouble, these are different modes and means for evoking (if not actually summoning) trouble. So with the dream, which may or may not be spoken, though music is essentially a dream. To sing the word dream is to call attention to the vivid ephemerality of song. It is also to ask, implicitly perhaps, if life is a dream, or a song.

As in a dream, when we know it’s a dream, if someone speaks the word we are startled into the world. Just so, we cannot die in a dream, or we would be dead,[3] and dead people tell tales only when live people play surrogate (or when the record spins the dead in their graves).

This is how La Luz sings the dream, with and without this linguistic excess—the “dream” in the dream.

Sergei Eisenstein uses the term overtone to describe the cumulative effect of various montage effects in filmmaking. Our scenic approach to La Luz has something in common with overtone in that we are thinking about filmic as well as musical effects, and because Eisenstein is considering dynamics between image and music (score). For us, though, the image resides in our minds, in the dream summoned by the music. And we are thinking of these dreamscapes as places rather than images, even as the dream might evoke images of places. The song, though, takes us there. And just as affect, mood, tone, atmosphere, and texture mesh, we are here and there (and there, and there) in song. So when we see and hear La Luz perform, we are here together, and we are there (and there, and there). The albums, and the band’s image, are that promise. The song tells us again and again it will take us there, to the dream.

We spoke of dreams in the previous installment of Book Album Book, and then too we thought of the way Ta-Nehisi Coates uses “the dream” to refer to false consciousness, and the deferred promise that Black people have access to the American Dream. And the context of his usage—Black death and disenfranchisement—matters, just as it matters that the American Dream is itself a false consciousness, a dream of a dream as universally attainable mutual reality. What Coates helps us see as he thinks about Blackness in America is that the American Dream is an exclusionary one, that we the people[4] means rich white property owning men and whoever they might decide to draft into adjacent (provisionally conjoined and exclusively bondaged) provisional status.

This notion of the dream is in mind, though I am not referring explicitly or only to Coates’ usage. Nor could I. But this is the thing about American music: it is inextricable from the American Dream, even as we re-dream the dream. We may not believe in that grand, false notion, but we dream. In our songs, we dream.

La Luz came down from Seattle to L.A. in early 2016, and slid over to Philadelphia for a show on June 10, 2018. Underground Arts is an ideal venue for this band. It’s a furnished basement with a stage on the level with the audience, but with enough separation to idealize the band, and for them to strike poses in the dark. La Luz is in all white, a trio tonight, as keyboardist Alice Sandahl is attending to that other family, the one that reappears when the dream subsides. They[5] look incredible together and sound better. This is one of those shows where a band a friend took you to see becomes one of your favorites, when you turn to your friend many times, and your smile renders anything you say superfluous. A show to remind you why you go to shows, and why you hang onto extra tickets for friends.

La Luz might have always sounded like a Southern California band, with its surf licks and high-contrast shade, but this album sounds like a celebration by recent arrivals[6] to the city of sun-dazed angels.[7] “Mean Dream” is Helios worship and sublime flakery: Sun King I mean to make you stay with me / … / Now anybody who knows / Who knows me knows I will go. The latter lyrics may be sung by supplicant or fickle god or devotee as god, all of whom will leave in the night and return tomorrow. The song is built for repeat listening, a chariot looping over your lounging body, one knee bent, an arm raised over your eyes.

The album is itself a dream of unknown duration, a spell, and La Luz works the ecotone while bringing a sense of separation between compositions, instrumentation and parts. Vocal harmonies play the heart, a chorus of sighs (ah ah but also aw aw and awe awe, as in the enchanting “My Golden One,” which opens side 2 like an ornate crypt), while sly lyrics bring the mind along.[8]

What are floating features but fragments of song, or dream? What remains are tracers of light on the backs of our lids. Floating features in this context recall as well what Greil Marcus and Luc Sante call the folk lyric tradition, which they also refer to as floating lyric. Fragments of lyrics, well-turned and sometimes gnomic phrases, drift from song to song over time, so a phrase like [they’ll] drink up your blood like wine appears in Bascom Lamar Lunsford’s “I Wish I Was a Mole in the Ground,” and reappears (with many stops between) in Dylan’s “Stuck Inside of Mobile With the Memphis Blues Again” (later covered beautifully by Chan Marshall), Tom Waits’ “The Black Rider,” and will float past us all one day. Floating lyrics can charge a song with curious import, open portals to other songs, other singers, other times, and set off commonplace phrasing that is integral to the currents and currency of American song. They might work as an inoculation to cliché, or a reminder of the power that runs through repeated phrases (some clichés are clichés for a reason—they feel good in the mouth and the ear, so we keep saying them).

But the title cut, which kicks off the album, is instrumental: the words have blown away, or floated along the tracks ahead. And when La Luz begins to speak, in “Cicada,” their voices are an ambience, even as floating lyrics find their way to us.

When you said that you’d love me better
with every passing day,
how could that go on forever
when I’m different everyday

Here’s that complex I,[9] the self that is several.[10] As with speaking the dream, La Luz bring their conceit, and their technique, to the surface of the song, while layering them with familiar gestures and textures. In air so hot and sweet we heard it in the breeze / Metallic simmering of invisible things, they continue, a tactile vision of the floating lyric we heard it on the breeze taking on the sheen of heat-struck late afternoon off-shore winds, or perhaps the Santa Anas, the Devil Wind fanning highwayside flames and driving us into the ocean, our skin and hair crackling with positive ionic energy.

That buzz, though, is not charged only by mythic wind, sun shimmer and power lines. It comes from the trees when the cicada have emerged from the earth in the dog days of summer—it comes from the carapace that sings here comes the night. The cicada, too, is the several self.

The last words of track 3, “Loose Teeth,” segue to “Mean Dream” with lost in a dream. But before we go, it’s the middle of the day in a bedroom fantasia as the image of loose teeth is probed by an idle tongue. I don’t have much to say but I’ve got places I could go / free floating deaf and dumb and dull / … / Loose teeth, what does it mean. When “Mean Dream” does come, there’s an initial protest (I mean to make you stay with me), and then we’re packing our bags and heading downstream, with or without Sun King at our backs. That mean is not so much the meanness of leaving or being left, but the meaning and the meaning to of the dream. This is the meaning lost to “Loose Tooth.”

There’s more, but there’s always more. We could return to “Lonely Dozer” asleep alone on side 2,[11] and follow every somnambolic trace, but this is your dream, not ours. When it stops, it just stops: we wake from one dream to another. Listen, go.

This is the third installment of Book Album Book. Part 1 is here, and Part 2 is here.

[1] We excerpt a long, three-column prose poem we have been writing since May 2017, in order to think about how to treat related subjects in different forms, according to the affordances of those forms. “These fragments are the remains of songs” is taken from André Lardinois‘ introduction to Sappho: A New Translation of the Complete Works. So is “[A]ncient scholars, like modern ones, had a tendency to identify all first-person speakers in Sappho’s poetry with the poet herself and to read her work autobiographically.” “The fog creates this filthy mirage” is something La Luz singer and guitarist Shana Cleveland said in an interview with L.A. Record.

[2] if not trouble itself—who would listen to a song that summoned actual death, heartbreak and taxes, rather than some emotive, generic, performative linguistic double?

[3] See Nightmare on Elm Street, where, also, the dream is real.

[4] We don’t believe you, ‘cause we the people spits Q-Tip on the second track of the last Tribe Called Quest album, We Got It From Here… Thank You 4 Your Service.

[6] give or take a few years, but life’s a dream without duration in L.A.

[7] even as the band’s moody, wonderful previous album, Weirdo Shrine, was recorded in a surf shop in SoCal quasi-Old Western suburb San Dimas (where I grew up on a cul-de-sac, eventually escaping north to the Bay Area) the year before La Luz arrived in L.A.

[8] Momentum for the sake of momentum, as Niko Case sang it in “Lion’s Jaws.”