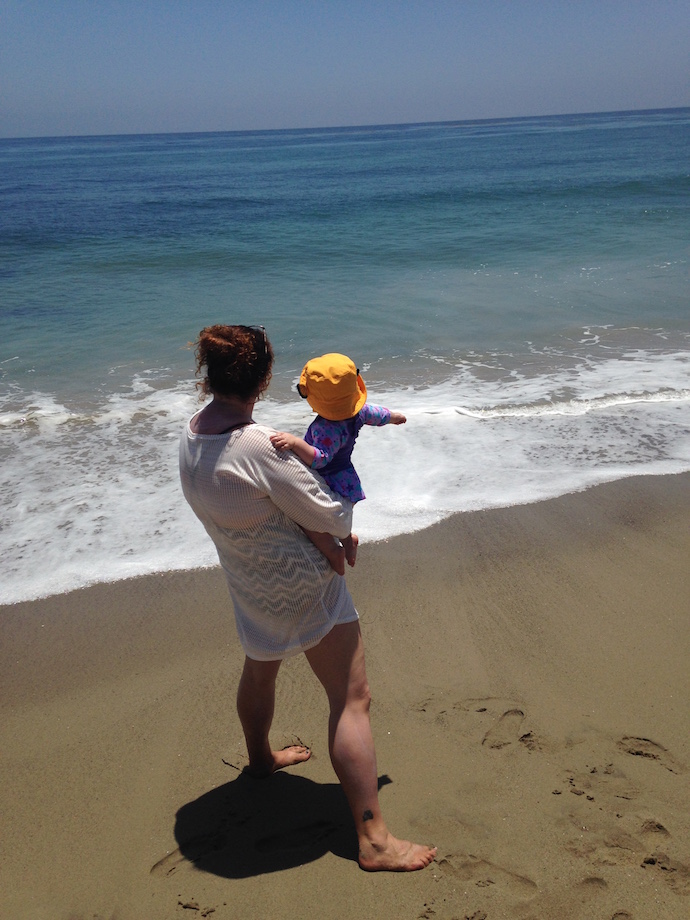 I’m a big girl, and even during times in my life when I wasn’t big, I thought I was. Big is ugly. I imagine thirty years from now I will look at old pictures and think to myself, “You idiot. You were always beautiful.”

I have a one-year-old daughter and all my baby weight. My baby is a big girl too, for now she is tall and chunky. People stop me on the street and say, “He is huge!” because even in pink everyone thinks she is a boy. A man told me the other day she looks like Moose from the Archie comics. I should have punched him. Instead I smiled and nodded my head and hated myself later.

When I was twelve I joined Jenny Craig with a friend. The night before we joined, her mom took us to Sizzler to have our last supper. I stared at my pile of all-you-can-eat chocolate pudding and thought, “I will never eat you again.”

Even though I was skinny after Jenny Craig, the older boys at school still sought me out to make fun of me and grab my breasts and throw me against walls because I wasn’t skinny enough? Because I was tall? Because my hair was big? I don’t know why. I thought maybe there was something inherently wrong with me, some small sick thing, and everyone could tell.

I had a friend with a smaller waist and bigger boobs and the boys all liked her better. When we were seniors in high school we went to a little polish bar in the city and the old woman bartender served us unlimited kahlua and milk’s for barely any money. She wanted us drunk so we would go into the bathroom with the polish boys. We felt eyes on us and hands on us and it felt good to be wanted. We liked our boys taller and bigger but the boys I liked most were my friends, the ones I knew, the ones who told me secrets, who laughed with me, our thighs pressing together in back seats, who put their arms across my shoulders and thought of me as nothing more than a sister or this is what I’d tell myself.

My father used to tell my mother she looked like a ghost without lipstick and he grabbed her belly skin, where we had lived inside her, and told her she was fat. She was never home. We lived with my grandparents and she worked all day, all night, all weekend, always.

Then I met a boy who looked at me like he wanted to eat me, he said, you should get tattoos on your arms. He took me out for french fries, which was extravagant and basically meant he wanted to marry me. He touched my fingertips over the countertop and told me all the dirty things he wanted to do to me. “Come back to my parent’s apartment,” he said. I was a virgin and horrified.

He laughed. “Mine aren’t either.”

He said, “I don’t care about your period.”

Instead we make out in an alley and on the phone the next day, he said, “Listen I thought you were Jewish. I only date Jewish girls.”

This was a relief, because I only loved boys who didn’t love me back, and if they started to, I ran the other way. I told myself I was unlovable. Ugly. Not the kind of girl boys liked.

No matter what I weigh, ever, up and down the scale, I can look into the mirror, naked, and think I am beautiful. But putting clothes on and going outside changes everything.

In my house no one showed or said anything about love but we had food. My grandma cooked giant Italian meals and if we didn’t finish our plates, we didn’t love her, and no matter what kind of violence was happening in the house it was nothing a nice plate of Gnocchi Bolognese couldn’t solve.

When I was pregnant with my girl I learned there are traces of our mothers inside of all of us, cells shared and mixed up inside our bodies by this organ a woman builds during pregnancy, the placenta. We even have traces of our grandmothers. I put my hands on my giant stomach and think about my mother in there, my grandmother, my self, my daughter.

A woman’s body is made to stretch and widen, whether she ever gets pregnant or not, it is in her biology to create space for all the people inside her. Her hips are capable of migrating apart. Her ligaments and muscles are able to loosen. Her vagina is meant to open, wide, wider than it seems possible, and then to shrink back again.

I was a “technical” virgin for a long time. I thought I was in control, not letting boys in, but they made their way in anyway, through my pores, I couldn’t stop them.

I wasn’t skinny, didn’t blow-dry my hair, didn’t wear make up, but still boys danced with me and took me home. A guy at a bar said to me once, looking at my two week old manicure, “You can see from a girl’s nails and what her pussy looks like.” I shrugged. He was basically right. I just went home with a different guy that night.

I lived in Italy when I was twenty-one and I promised myself, no boys. It’s just me for now.

I was slightly bigger than the other girls in my apartment but I could cook and after a dinner party one night, Roberto, a beautiful Italian man I could never otherwise get the attention of, pursued me for months. “Your lasagna is better than my own mother’s,” he said, his mouth close to my shoulder and I was hot inside but I pushed him away.

Instead I walked her streets. Went to museums. Filled myself up with love for this ancient city.

For the first year of my daughter’s life, I have been worried I am not enough for her. Not good enough as a mother, not accomplished enough as a human being. I am sad and I try to fill the sadness with food, my old friend.

She doesn’t care that she is big, or that I am big. She thinks I am the most spectacular, safest thing in the world. I want to eat her. I want to absorb her back into my body. She is like a firework, like magic right in front of me, she changes and grows and I don’t know what to do. I want to stop time and love her enough and properly but I can’t. Every day she is a new baby, a new person I impossibly love even more than the day before.

My mother says, “Sara, in my life, in that house, I had to build walls. I had to protect myself. I went to work. I didn’t let anything in or out.”

But I don’t want to build walls. I want to love my daughter. I want to hug her and for our love to bounce back and forth and fill each other up and I want it to be enough.

Sara Finnerty has essays and stories in Black Warrior Review, Joyland, Brevity, The Weeklings and others. She is from Queens, NY and lives in Los Angeles where she co-curates The Griffith Park Storytelling Series and lives with her husband and daughter. Her website is www.sarafinnerty.com