Doublings: A Review of The Mend 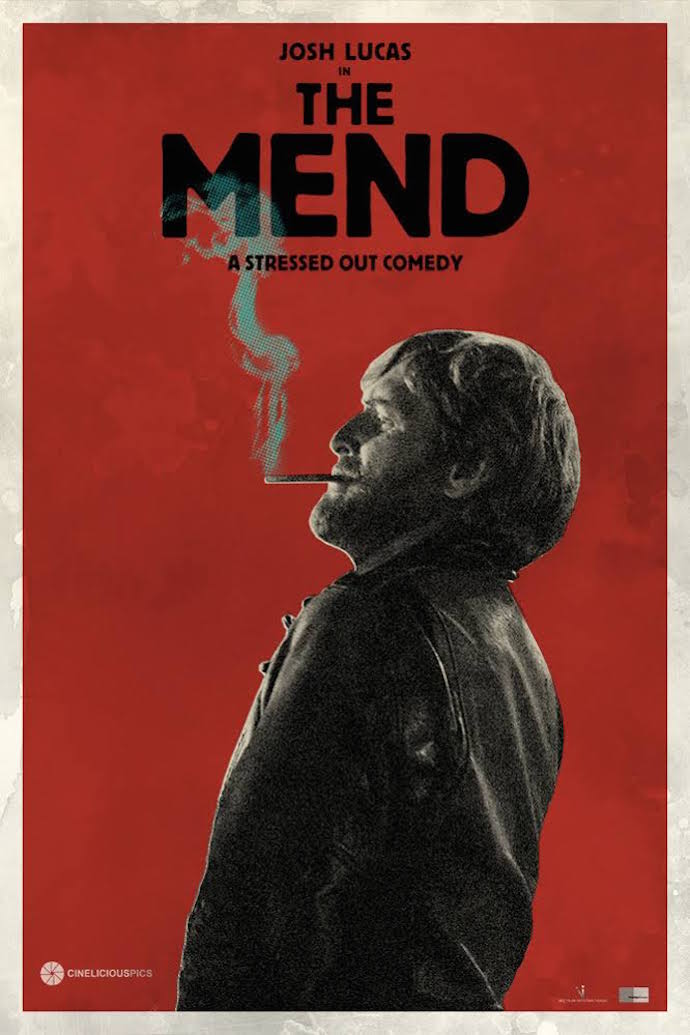 Lewd and lucid, John Magary’s first feature-length film is about family problems, about a family of fuck ups. Shambolic, shaggy, bearded, leather-jacketed Mat (Josh Lucas) enters the lives of his more straight-laced, but deeply repressed brother, Alan (Stephen Plunkett), and his girlfriend, Farrah, (Mickey Sumner), dropping in on their low-key party at their Harlem apartment. He appears on their couch like a phantom, and proceeds to create chaos.

After an exquisite, extended, elliptical opening—a series of shots capturing Mat in different public spaces like a subway station, a café, and a bar—the film switches to the party, which lasts, say, twenty minutes. It becomes a hangout movie of sorts in which the camera takes time to focus on different sets of people chatting, dancing, and drinking throughout the apartment. A few moments are devoted to tiffs between Alan and Farrah, the signs of a fissure in their relationship.

The next morning, amid a trashed home, Alan and Farrah race to catch their flight for a getaway vacation to Quebec. Mat wakes up, realizing he has his brother’s apartment all to himself. He eats a big bowl of mac and cheese, surfs on the Internet, and invites over his friend, friend-with-benefits Andrea (Lucy Owen). Days later, Alan shuffles through the front door, sans Farrah, coming home sooner than expected. He’s stunned, he’s paralyzed; it hasn’t hit him fully yet that she may not love him anymore. It’s up to Mat, Andrea, whoever’s close, to care for the vulnerable Alan.

Since the 2000s, there has been a steady stream of New York micro-budget and low-budget independent films that are generally typified by, above all else, character and narrative development while style is molded to fit the subject matter. The Mend is one of the better examples of this ever-growing kind of film. With helicopters constantly flying over the apartment and electricity that blinks on and off, Magary establishes an off-kilter mood for his film. Recalling perhaps Jean Renoir, his camera is always on the move, which he couples with a lean, precise, rhythmic editing scheme.

And evoking safety and intimacy, shots of the apartment interiors have a warm glow while outdoor scenes have a dull “naturalistic” look to them. Magary allows time for digressions and running jokes. Objects, gestures, people, events reoccur. With each repetition there’s variation, a transformation. Captured in an iris shot, an adult hand grips a child’s wrist, followed by shrieks of laughter. Later in the film, Alan folds his hands together. Doublings happen on the level of the image too. During the party, in a POV shot, Alan witnesses Farrah dancing with a ballet friend across the room. When Alan arrives prematurely from his Quebec trip, he, Andrea, and Mat go out for a walk one day. They straggle behind while Mat is up ahead. He turns around and sees Alan crying, doubled over, and Andrea’s hand on his back.

Josh Lucas is an actor who blends into films. That is until now. He gives one of his best performances here. It’s up there with his avaricious uncle in David Gordon Green’s unofficial remake of The Night of the Hunter—Undertow. Look at the way he lights up when he hears an ice cream truck’s song: he’s giddy; he’s all aflutter; he reverts to a childlike essence. He’s no longer a young American psycho, but a dazed, middle-aged slacker, mooching off others, but also healing wounds.

The Mend is now playing at the IFC Center in NYC.