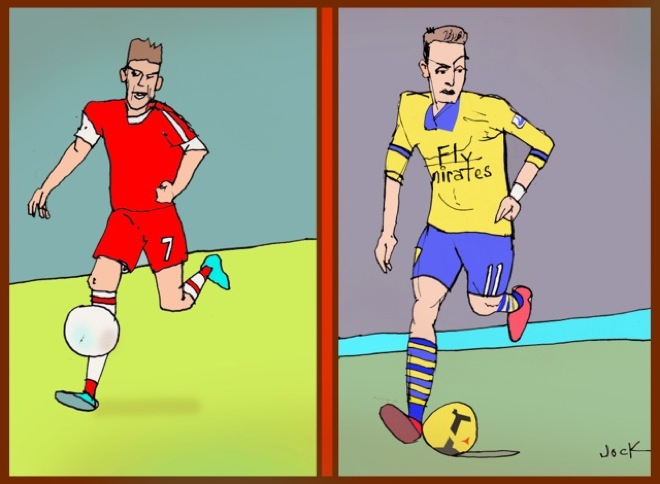 Is this destined to be the best EPL season ever? If the final two thirds of the campaign holds form, and plays out in a manner that the first third has, then the answer will be yes. Eleven matches into the 2013-14 slate of 38 games, a mere six points separate Arsenal at the top (25 points) from a disappointing Manchester City in 8th place (19 points). That’s a good run/bad run of two games for those teams thus separated. This weekend the English Premier League (EPL) resumes, after returning from a two week international break (to decide the final World Cup spots), and as a fan, I can’t wait.  Below is a quick review of the season thus far, of where teams are in the table, with places and points in parentheses.

Top Dog-Arsenal (1st, 25 points): For the north London team, what a difference a few months make. In the dog days of August, Gunners’ fans and pundits alike were sharpening their knives for long-time manager Arsene Wenger. In the off-season, he had done virtually nothing to sign quality players. Add to that, a boatload of the reserve and sub squad left on loan or transfer, raising the specter of a weakened and undermanned team. After losing their first game to perpetually middling Aston Villa, the cries for Wenger’s head rose to a fever pitch (my apologies to Nick Hornby). But then, the team started winning. And winning. Then Wenger splashed the cash, bringing in German national Mesut Ozil, a starter for Real Madrid, who was suddenly dispensable when the Spanish giants signed Gareth Bale. Ozil fit in quickly, and Arsenal keeps winning, losing only once, to Manchester United at Manchester. No shame in that.

Nipping at the Heels—Liverpool (2nd, 23 points), Chelsea (4th, 21 points), Manchester United (5th, 20 points): The three teams here are no stranger to the top of the table, though Liverpool has gone through the proverbial wilderness in the past dozen years or so. They sit in second because of the most lethal, in-form strike team in the league, Luis Suarez and Daniel Sturridge. Suarez is back from serving a six-game ban to start the season, which he received for biting (yes biting) a Chelsea defender during a game to end last season. Assuming he keeps his head and his health, and that Sturridge continues his torrid pace, Liverpool are already dreaming of the top.

Chelsea hired prodigal son Jose Mourinho, the self-proclaimed Special One, for his second tour of duty with the London club. Know this: life will never be dull at Stamford Bridge, with Jose pushing all the right and wrong buttons. One of those head-scratching wrong buttons was picking a fight with midfielder Juan Mata, one of the best players in the EPL last season. Mourinho didn’t see it that way, nailing the Spaniard to the bench early in the season. Chelsea have underwhelmed, especially of late.

Manchester United also hired a new manager, the first time they’ve done so since the 1986. It’s tough to replace a legend, and a knighted one at that; to be sure, Sir Alex Ferguson’s hand-picked successor, David Moyes, has gone through some growing pains. Through five games, United were mid-table, and looking lethargic, particularly in a humiliating 4-1 drubbing at the hands of their cross-town rivals, Manchester City. Unfamiliar territory for the team who coasted to the finish line last season, winning the league with 11 points between them and their nearest competitor. But a torrid run in their last six games, has them taking 13 of a possible 16 points.

The Pleasant Surprises—Southampton (3rd, 22 points) and Everton (6th, 20 points): Southampton in third place this far into the season? A mere four years ago, Southampton were placed in administration and relegated to England’s League One (the third tier), but have since have  risen up to nearly the top of the first-tier EPL. Who woulda thought it? Pleasant to watch, their young Italian manager, Mauricio Pochettino, has them playing an attractive brand of attacking soccer. Strikers Rickie Lambert and Jay Rodriguez’s stellar play has earned them a call-ups to the England national team.

Everton lost long-time manager David Moyes to Man United, so hired Roberto Martinez, who has them competing every game.

The (Marginally) Disappointing—Tottenham (7th, 20 points) and Manchester City (8th, 19 points): Tottenham brought in a lot of new players this summer and sold their best player, Welshman Gareth Bale, to Real Madrid for a reported 100 million euros (a transfer fee record), with which they will be able to buy more players during the January transfer window. Tottenham’s hot start has cooled off. Their first five games they gave up a total of one goal, in a 1-0 loss to north London rivals, Arsenal.  They’ve cooled off considerably in their last six matches,  winning only twice in that period.

Many pundits had Manchester City battling Chelsea down the stretch for the championship, but teams with champion aspirations—and pedigree—don’t lose games like City have lost. The squad is statistically the most baffling team in the league because of their home versus away form. At home, they are a juggernaut, a steamroller, a machine, pick your cliche: they have won all five (including blowouts of 4-0, 4-1 and 7-0) with 20 total goals for, and only two against. Away from Manchester, however, they are toothless: in six games, they have lost four, drawn one, won one. They are feckless and hesitant on the road, scoring just eight while giving up ten. To top it off, they have lost to Aston Villa, Cardiff and Sunderland, teams they have no business losing to. Those nine lost points to crap teams, could very will come back to bite City on the ass come May.

Say this for the EPL: it doesn’t coddle its players at holiday time. While most domestic European leagues take a two week break for eggnog and presents, not so the EPL. Instead, they ratchet up the schedule. To wit, when EPL action resumes on Saturday, they enter the Great December Fixture Pileup. All teams will play an astounding ten league matches in the next 41-days, from November 23 to January 11.

Arsenal and Chelsea seem to have it worst: after they play each other on December 23, they each will play three more games in the following eight days, with matches scheduled for Dec. 26, Dec. 29 and January 1. Sadistic for the players? You bet. Great for a fan? Hells yeah. We have twice the number of games to watch, compared with any 40-day period in the season. Who knows, by mid-January, the top eight teams in the table could be turned upside from where they are now. And maybe my underachieving Manchester City will turn around their away form and make a run to the top.