Basement Magic: Notes from a new D&D player & an interview with Zak Smith

Lately, I’ve been playing Dungeons & Dragons (well, okay: Pathfinder) with friends. It’s been a fun and often weird new thing to do with others; even now D&D carries a reductive weight—a fear about its complexity, the time and math required to play, and an anxiety about what others might think of the fact that you play D&D—that scares people off. But after years of grinding through same-faced AAA video games, sitting around a table and making up stuff with friends (e.g. a goblin entranced so deeply by a bard that he sits down—while on fire—and partakes-in-the-entertainment-to-death with a big dumb goblin grin on his face) has felt like water in the desert.

I recently started studying at St. John’s College as an undergrad. I’m a bit late to college—I’m about to turn 25—but the age has given me a sense of permission to make of college what I will; this means I’m the guy who constantly invites/entraps his fellow students into trying out new shit—e.g. zealously weightlifting, playing racquetball for three squeaky hours straight, and approaching Dungeons & Dragons, a game that I had been curious about since my first encounter with it when I was 12. (My friend Brent, a smart kid with Tourette’s, invited me over to play at his house. It would be a game of two. This quickly became a game of one: I got so obsessed/paralyzed while creating a character that Brent put himself to bed.) The next time I was invited to play was just six weeks ago. My wife, two classmates, a recently graduated friend and I have since convened once per week in a basement room at St. John’s. We’ve been lead by our friend Bernardo, a brilliant Guatemalan who can just as fluidly describe Hans Jonas and the history of science as he can the spooky environs of a newly discovered castle.

The routine thus far: we order a bunch of tacos, Caleb (the new alum) brings beer, and we play for three or four hours straight. The games have been thrilling and dull in equal measure, but the dullness has a nice dimension; unlike the boredom felt while grinding through a Call of Duty, this boredom is still social—this boredom lacks the pallor that comes from screens. And unlike time I spend engaged with some new video game, our D&D sessions each peak with self-made experiments, interactions, and images—like the above mentioned goblin self-immolation—that have stuck with all of us for days. We all walk away with a different experience of each piece of campaign, but these experiences have been built communally, with the simple aid of dice, chalkboard maps, and the DM’s raconteur manipulation. Every week, my friends and I have created a time of silly underground magic. 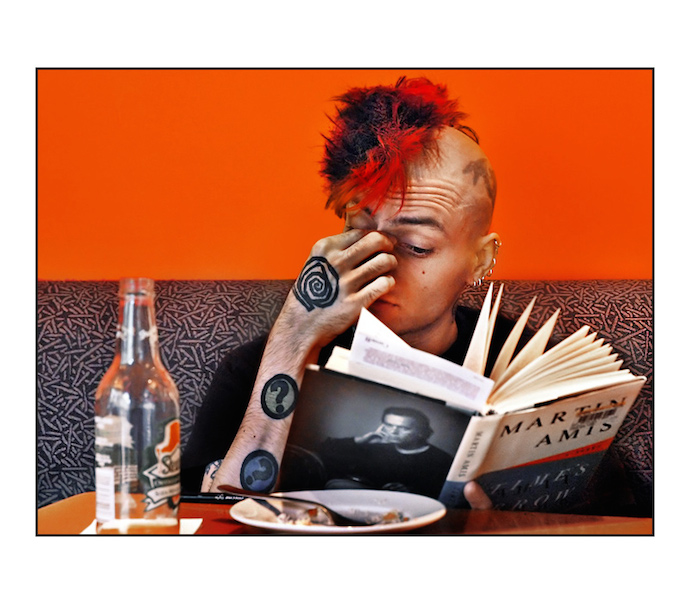 K: I started playing Pathfinder a couple months back. Coming into the D&D world as a saturated video game kid, the games have felt alive and fun in a way that most multimillion $$$ games don’t. What does the new D&D (a.k.a. 5th Edition/5e) improve about the experience, particularly for new players?

Z: It’s lighter and looser and there’s less math and character building up front—so you can get right into the game. In D&D you’ll be looking at your character’s list of pre-loaded abilities less and thinking, more often “Ok, if I was this 14 quick and 12 charming and 17 strong what would I do in this situation?”

K: I’m going to DM my first game soon; what tricks and styles of storytelling have you found most effective while running a game, or do you have to figure out your audience every time? Anything that new DMs should avoid?

Z: Colonel Walter E. Kurtz has the best GMing advice: “Horror has a face, and you must make a friend of horror. Horror and moral terror are your friends. If they are not, then they are enemies to be feared. They are truly enemies.”

Cormac McCarthy has some, too: “At a young age, said the judge, they should be put in a pit with wild dogs. They should be set to puzzle out from their proper clues the one of three doors that does not harbor wild lions…He loves games? Let him play for stakes.”

Also when you have an important character talk to the players, have them talk slowwwwww and look them in the eyes. It’s unnerving. And if you run a pre-published adventure—avoid reading the boxed text aloud! It’s no fun. You gotta read your players as you talk-—are they bored, are there words they hang on?

K: What has changed most about your D&D experience since you first started playing, and how do you see 5th edition changing your game in the future?

Z: Well: way more women at the table. As for 5th, it might make it easier to find new, published supplements and adventures that I can use for my game—the 3rd and 4th edition ones had much longer statistics for the monsters which left less room for interesting new ideas, like “The walls of the Temple of Demogorgon are made from frozen tears.”

K: This is a softball down the middle on purpose: they’re not mutually exclusive, but why play D&D instead of [insert new AAA video game]?

Z: Why have 5 friends at your house instead of play video games?