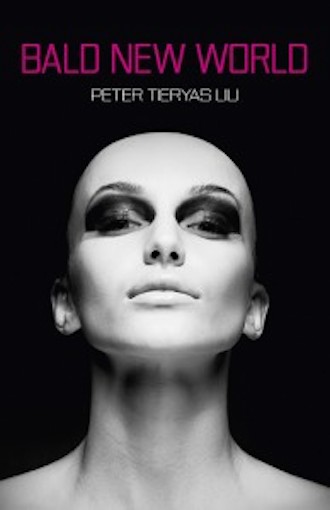 There is a Vietnamese proverb or maxim that states something along the line that “hair and teeth are the corners of a person’s soul.” Rang va toc la goc con nguoi! In Peter Tieryas Liu’s world, what does the soul of human existence look like when half of such a corner has gone missing or has been demolished or has to be artificially regrown? And what happens when both corners evaporate? Bald New World seems to beg this moral question: What will it take to regrow or manufacture a soul? Tieryas Liu has more than flirted with this senescent, futuristic plague; he has incubated 10 chapters comprising synthetic nefarious characters, filmmakers, researchers, religious fanatics and cricket fighters, and martial-art-efficient chopstick-assassins germinating out of literary concubines, and named such a glabrous world the obvious: Bald New World.

It won’t do Tieryas Liu’s work any justice to compare his hairless new world (as his book cover so politely indicates) with Aldous Huxley’s Gutsy New World, to off-handedly declare it a classic title parody such as the one we see with Jane Austen’s Pride and Prejudice and Zombies. In fact, at a shopping center in Las Vegas, my mother talked about farm-raised fish and its taste and when I encounter the same experience here through a dialogue with Tieryas Liu’s protagonists, I get the sense that I can relate to Tieryas Liu’s social and political critique on profit margin, capitalism, hair liquidation, the current state of humanity and coeval civilization through another medium that most people recognize as fiction. And it’s true that Asians like to talk about how big shrimps are. But the biggest question for me is how to resolve the literary conflict of metamorphism when I encounter a carnal Kafka’s dilemma upon arriving at an epic Tieryas Liu sentence such as “I hated bug sex” (p.107). What do we do and where do we go when we hate bug sex? Perhaps my tiny, bitsy criticism amongst tinier remarks for Tieryas Liu’s work is that when a wig factory burns down, shouldn’t it smell bad? Horribly bad. Of burnt hair. Burnt hair smells bad. Burnt synthetic stuff smells bad.

Burnt animal-like horse hair smells awfully bad. The main protagonist Nick Guan, named after a hero of Chinese literature, endures incredible hardships and stone sucking brutality, sharing parallel ontological and existential (though not torturous) condition as Samuel Beckett’s protagonist, Molloy, and some stationary, semi-quotidian, religious contemplation such as a marriage failure and farting. It’s a classic, literary tendency to view stone, an intuitive geological impulse, as a torture device and an existential pacifier. We can relate and not relate (like some distant cousin we once saw and were introduced to in our childhood) to some semi-upstanding cinema-induced, film collaborators/thugs such as common-man artist Nick and Nick’s filthy rich, morally lopsided best friend, Larry. Between rich and poor, between having hair and having no hair, having extraordinary upbringing and its opposite, we begin to see potentially through Tieryas Liu’s eyes that vanity, a kind of incubated genocide, is a soulmaker.

What will it take to regrow or manufacture a soul? After all (p.63) “Extremity is the only way to get things done in this world,” the 39 year old filmmaker, wig tycoon, Larry, answered. Behind the backdrop of romance and a gambling town and cricket fights and the horror of hair manufacturing, we secretly cheer for Nick Guan (as Gene Liang before the army), the common cricket selfie we see in all of us. Using hair to paint morality, does Tieryas Liu succeed in addressing the landscape of a person who has been held in chains by a bald hairy past with political, entrepreneurial, and futuristic satisfaction? Read his book and let me know. Shave your head, destroy your teeth, if need be, to get this job done. With Tieryas Liu’s extraordinary cinematic intuition, I highly recommend this book be turned into cinema.