Andrew Lewis Conn returns to Fanzine with an unsparing short story about a father, a son, and the American Dream. Frederick Jackson Turner never imagined a theory of the frontier like this. Illustrations by Robin Brasington. 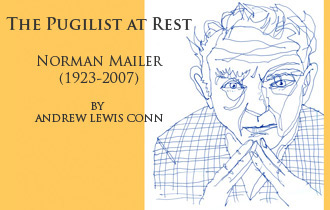 Was Norman Mailer a "pampered superbrat" as Martin Amis put it, a chauvinist pig as Gore Vidal would have it, or America’s finest writer as pugilist – an activist, novelist and journalist who didn’t simply cover the story but was always, "indelibly, part of the story." "If American life" in our times, Andrew Lewis Conn writes, "was getting crazier all the time, filtering it through the prism of a crazy, and crazy-making, personality like Mailer’s made better sense than not." Mailer drawing by Danny Jock.