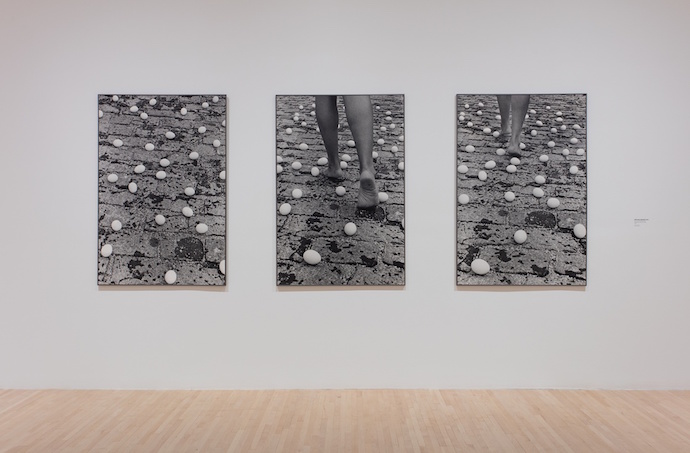 The Museum of Contemporary Art in Los Angeles is currently hosting the first major retrospective of the work of Brazilian artist Anna Maria Maiolino. Maiolino was born in Italy. Her family immigrated to Brazil in the mid-40s. In the early 1960s, she became associated with the thriving performance and conceptual art movements of Neo-Concretism, Objectivism and the Nova Figuração, establishing a strident Tropicalia, with bright colors, incorporating the moods and indigenous imagery of Amazonia.

Maiolino works across media, focusing on performance, sculpture, and video; she first gained prominence in the 1960s. The Brazilian Neo-Concretism of the 1950s and 1960s rigorously developed an aesthetic defined by the explicit performance and interrogation of the social exchange of art. In 1959, Ferreira Gullar, a prominent Brazilian poet, wrote a “Neo-concrete Manifesto” decrying the scientism of modern art. He urged creative inquiry towards the “moment of becoming” for art “non-objects.” For Gullar spectators become part of the art experience, through contemplating and participating the work. It is only through social exchange that art objects have any meaning.

Maiolino’s early experiments are documented in procedure based diagrams and performance directions. 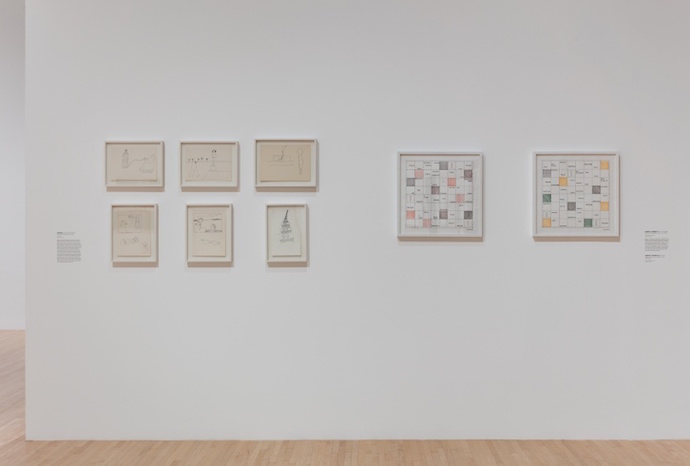 The exhibit is spare. Curators focus on the textural elements of Maiolino’s large scale performance pieces. There’s a floor covered in modeling clay. There are the inky and trailing diagrams of her dances.

Objectivism, as a kind of process based performance, does not suggest the possibility of a performance without subject, rather, the exposing of subject through constraint or procedure.

Her imagery returns to the vessel, something that cannot be filled. There’s an aspect of latent nationalism. But it’s the utopian nationalism of 1950s Brasilia; steeped in the notion that Brazil might emerge as a multicultural state that also had a coherent sense of self. Tropicalia, and especially the Nova Figuração was hyper technological, using new colors and methods, and hypervisceral in every sense of the word. 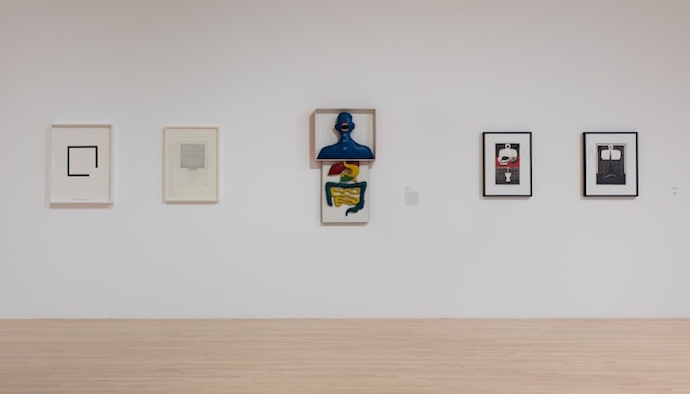 Maiolino explicitly drew on psychoanalysis often describing the human body as constructed around an essential lack. This lack, and the duodenum, make up a piece of human bodies moving forward through the world.

In one piece, Maiolino converted a friend’s room into a clutter of dung heaps, modeling clay squeezed out into long trailing castings. For Maiolino, this is an apartment, empty save the phantom casings of a missing person. 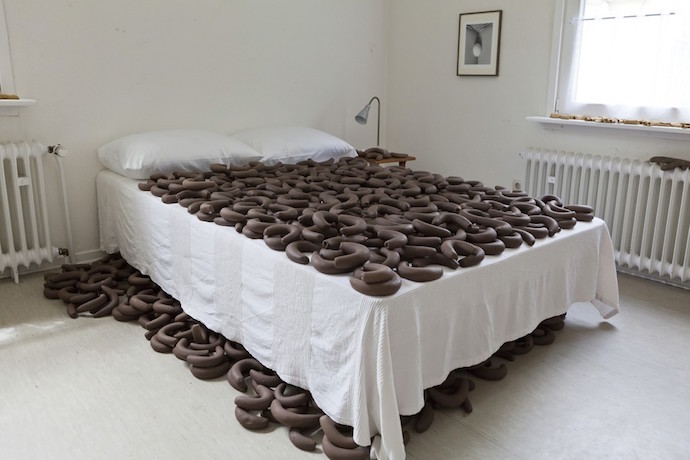 For Maiolino, looking at the waste that bodies produce, celebrates those bodies, and affirms the existence of those bodies.

The process of moving through the world, creating waste, and especially moving against a lack or void within our bodies, that urges us forward, is an important aspect of her compulsive and intricate set pieces. There is an ethic in devouring social affect, and the humanizing experience of putting another person’s body inside your body, in cannibalism or in love.

In another piece, three women share a piece of thread that winds through their mouths. Pulling thread in, the drawing in of a line, captures that essentially modernist mode of seeking the thread, the pattern; this emerges in the assembling of mass mediated dispatches into a coherent story, the modernist mystery, or of assembling a truth from many disparate parts.

Maiolino shares many tones and compulsions with her peer Lygia Clark. Another peer is essentially Doris Salcedo. All three of these artists honed in on the manner the mechanics of authoritarianism necessarily co-opted the technology and cultural artifacts of everyday life into a system of control.

Maiolino and the broader cohort of Lygia Clark, Hélio Oiticica, Lygia Pape and others, inaugurated a vocabulary for performance art that has persisted across the last sixty years. By the late 1960s, the leading voices of Brazilian art faced censure and intimidation. And her work, engaging the social exchange of information and affect, became an explicit critique of authoritarianism. As the regime disrupted the reality of the republic and sought to create new realities by undermining language and culture, everyday objects became complicit in the breaking down of dissident language. Chairs, shoes, radios, and telephones were warped in obscure performances, and Neo-Concretist appropriation of these mundane objects took on a desperate tenor. Challenging the dictatorship’s tendency to co-opt and destroy the language of peace and the language of community, Maiolino’s work became essential.

Her pieces include defecation, mastication, and the ritualized performance of cannibalism.

Helene Cixous wrote about the encounter, between bodies and other bodies that are inherently unknowable, represent a kind of cannibalism. She described the exchange of social affect between bodies, representing a kind of eating, and reinterpreting external bodies and languages with a newly constituted truth emerging from the encounter. Cannibalism, obviously, has never been about nourishment, rather it persists in relief against cultural edict. Oswald de Andrade, a seminal Brazilian Modernist, wrote a “Cannibal Manifesto,” in 1928 that argued for this exchange and performance. Evoking the Andrade call for a Brazilian art that centers indigenous folk cultures, Brazilian artists have return to ritualistic cannibalism describing a performance of the compulsive drive towards the little death. Both indigenous and European cultures have historical instances of ritualized cannibalism. Amazonian surrealist Pablo Palacio wrote about cannibalism as indigenous as well as in relation to Rabelais, representing a celebration of corporeality and the excess of body. Early modernists identified the way cannibalism often occurs as a recreation of a divine creation myth, or the symbolic consumption of a divine body.  Cannibalism establishes the traditional erotic transcendental rupture. The sacrificial causing a little death. Like the fire sacrifice in a mid-summer festival. The procedure of tasting death, seeks to establish a knowable death.

In 1981, Maiolino performed a piece called Entrevidas, now included at the MOCA retrospective. In it, she laid out dozens of eggs across a city street, creating a minefield of perfect white orbs, and then danced across the street, perfectly avoiding the eggs. It’s a bravado celebration of the ecstatic as she danced faster and faster over the eggs, joined by partners, each touching down without rupture.

The bodies dancing across the field without collision captures a lovely and foundational tension of modernism.  It recalls Kafka’s trapeze artist, who sought to remain forever suspended in the air, or Benjamin’s angels burning up and being reborn each day. All of this concerns the compulsive performance of language culture, against the inevitable collision, Oulipian clinamen. The uncanny aspect of the piece emerges as the eggs remain unbroken excluding a dramatic and symbolic crushing of an egg in the hand of a performer. As such, it’s an exuberant and energetic sleight of hand.

The Ancient Greek philosopher Lucretius elaborated on the tradition of Epicurean atomism famously establishing the notion of the swerve. For atoms falling across a void, in parallel paths, there is an inevitable swerve, or clinamen. This became an important organizing principle for chance operations in the service of the 20th century avant-garde. And important work emphasized the inevitability of the encounter, the performance of constancy, and the ritual of everyday performance.

As a post script, I’m reminded by this piece of a classic gag by the early film duo Stan Laurel and Oliver Hardy. Hardy walks into a cantina where tough dockworkers drink and carouse. He orders a drink. He sets an egg on the table, and watches it. A tough asks him, “What are you going to do with that?” He replies, “I’ll bet you can’t put that egg in your mouth without breaking it.” The tough takes him on. And no sooner has he put the egg fully in his mouth, Hardy hits him on the chin, forcing him to break the egg. This starts a full on brawl and a line of toughs chase the little man from the bar. Outside his partner is waiting to knock them out and sell them as indentured sailors on a commercial ship bound for Shanghai. The egg always breaks.