Alien of Extraordinary Ability: An Interview with Bettina May 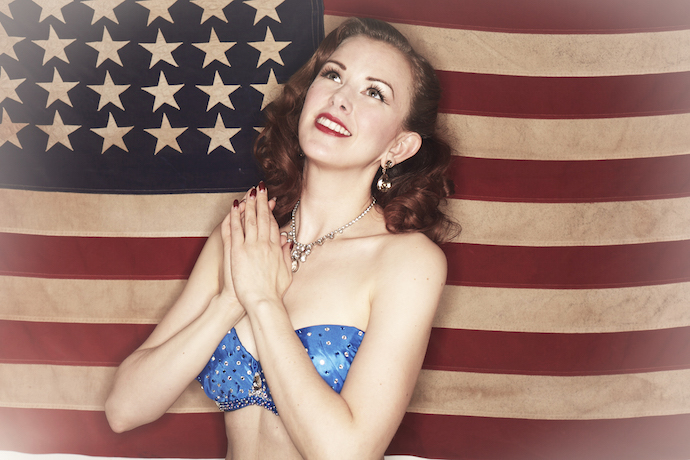 [This is the second entry in our ongoing catalog of interviews with Aliens of Extraordinary Ability; check out the first, with Maria Minvera, here. – ed.]

Bettina May holds the distinction of being the first pin-up model and burlesque dancer to be awarded an O-1 visa by the United States Citizenship and Immigration Services, a fact that naturally raises the question of how many other pin-up models and/or burlesque dancers are working in this country under the authorization of an O-1. I spent an entertaining afternoon on the phone with several friendly representatives of the USCIS putting my diplomacy skills into action as I sought an answer to this question—an attempt at pinning down the pin-up numbers by engaging in the ever-appealing repartee that I associate with getting any kind of answer from the USCIS. In the end the number proved elusive, but I think it’s quite possible that Bettina May is the only Canadian pin-up model who is also a burlesque dancer and has earned not just the O-1, but gone on to upgrade (in 2012) to the EB-1, the extraordinary-ability visa that grants permanent residency in the U.S.

My interview with Bettina May, who now calls Brooklyn home, took place by email during the gaps in her busy performing schedule. If I had the wherewithal, I’d book a flight to see her perform tomorrow evening, March 8, at Sid Gold’s Request Room (“Home of That Baldwin Sound”; 165 W 26th St), where she’ll be singing jazz tunes and taking a turn on the drums to back up fellow burlesque vocalists Cassandra Rosebeetle and Minx Arcana. If you have the wherewithal, please do attend and send me your napkin with its jottings.

How difficult was it to persuade the USCIS that you deserved the coveted “alien of extraordinary ability” designation?

It was a real uphill struggle to get where I am now. For one thing, no one involved had ever heard of burlesque before, including my lawyers, first for my two consecutive O-1 visas, which were each good for one year. And then with my green card in New York, I had to repeat the same research over again when I got a new lawyer.

So your lawyers weren’t experts in burlesque.

I had to work very hard to school my lawyers on what burlesque and pin-up are, and they in turn had to explain that in a way that defined it as the art form it is to the US Government. For anyone applying for these classifications, we have to prove that no one else can do the work we do, and unless you’ve won the recognized top award in your field (like an Oscar, or Nobel Prize, for example), you need to meet 3 out of 10 criteria, and not all of those 10 will apply to your field, so it’s a real challenge. It’s particularly difficult when your art form is decidedly under the radar and even the top performers in your field are likely unknown to immigration officials and your lawyers. And let me tell you, as a Canadian raised to be humble, tooting one’s own horn is the biggest challenge, but it taught me to appreciate my life’s work and be proud of myself.

Had you thought about leaving Canada before you applied for the O-1?

I think I’ve always wanted to live in New York City, ever since I was a little girl watching old musicals about showbiz, I knew this is where I wanted to end up. On a broader scale, the US simply has a great population density than Canada, so it’s much easier to be a touring performer, and once I started touring all over the US (I think there are only a handful of states I haven’t performed in, maybe Wyoming and Michigan?), I realized the only place I could make a full-time living as a burlesque performer was in New York City. The scene here is so diverse and it’s a town that really appreciates live entertainment.

What was it like making the transition to living in the U.S.?

I never could have imagined how expensive it would be to get started here, especially with all the initial costs I incurred in finding and retaining a lawyer, which alone ate up my savings in a couple weeks. After that it was sink or swim! I had a very tight and challenging first year, but things really started to take off, and if you can survive that first year, you can get through anything. 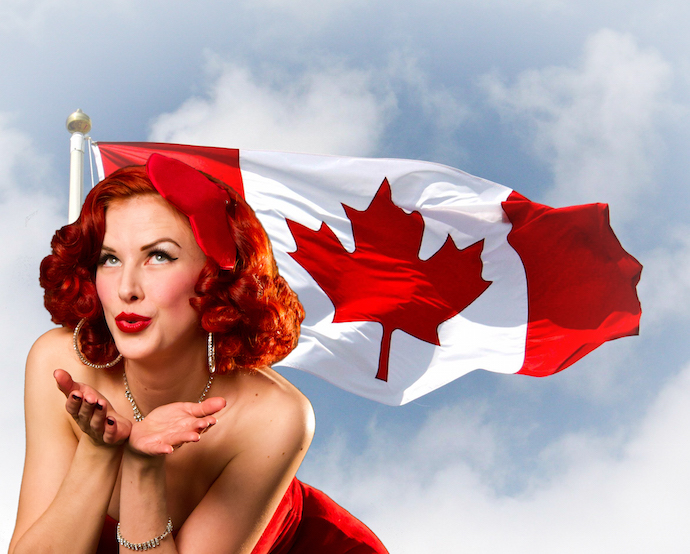 Obviously you survived, and now that you’ve been here, how does your life here compare with the life you imagine you’d be living in Canada, if you hadn’t left?

It’s hard to explain, but there is something quite different about the US compared to Canada, and yet to look at the two countries and the people, things seem so similar that the small yet important differences are shocking.

I think quality of life, particularly with respect to the different health care systems is a huge difference. Particularly among full-time performers, health insurance is so rare that many people I know never visit a doctor, even in dire circumstances, which for a Canadian is unfathomable, but now that I live here it’s my reality too. Fortunately, since the Affordable Care Act came into being, I and some of my colleagues are now covered, but many still aren’t, at least not adequately.

But then again, I could never manage to be a full-time entertainer in Canada, with the population being so much smaller and spread out than in US cities, so it’s a trade-off that works for me now. If I was still living in Canada, I imagine I would need to have some sort of desk job. I know very few Canadian burlesque performers who are able to make a full-time career of it. Traveling within Canada is also very expensive, with towns being so far apart as well, so touring isn’t feasible either.

Apropos of touring, what projects are you working on now?

Right now I’m focusing on my newest show,  The Beat Girl (from All That Glitters), in which I sing and play drums, and generally host the show, and have a wonderful pianist Chris Johnson who sings as well, and a rotating cast of the best local burlesque performers to round out the show. I’m really excited about bringing my other performing arts skills on stage, although I still love burlesque very much too. I’ve always loved doing a variety of things, and the timing was finally right.

Earlier this year I debuted my singing in another new production, the Flatiron Follies, which I co-produce with Grace Gotham, and that just got renewed for next year which is pretty exciting. We do a lot of duets in fabulous costumes, like an old school vaudeville variety show, and each month we have a new guest dancer and singer to mix things up.

Anything else new to report?

I just moved into a new apartment with a gorgeous home photo studio, so I’m working on hosting more Pin-Up Workshops there, where I teach people the art of vintage style in a full-day class. I’m also looking to start online classes and private coaching as I rein in my touring for the next year or so and focus more on staying in New York.