A Review of Nicotine Gum 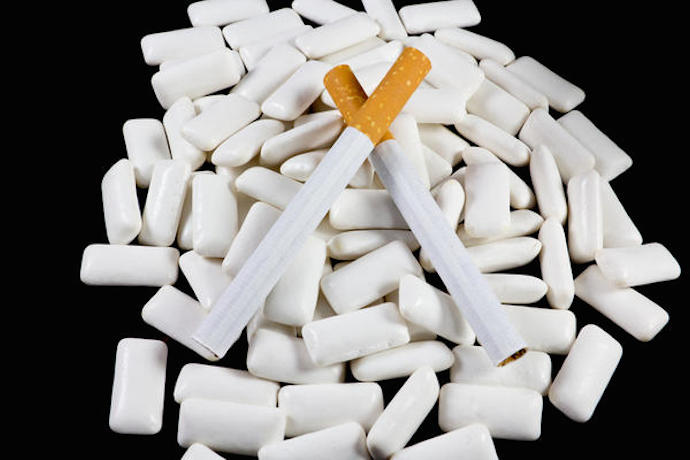 I chew the gum, because I don’t trust the universe to fill me up on its own. I just can’t count on the universe to sate my many holes: physical, emotional, spiritual. So I take matters into my own hands. I give myself little ‘doggy treats’ for being alive. Each time I unwrap a new piece of nicotine gum and put it in my mouth (roughly every 30 minutes) I generate a sense of synthetic hope and potentiality. I am self-soothing. I am ‘being my own Mommy.’  I am saying ‘Here you go, my darling. I know life hurts. I know reality is itchy. But open your mouth. A fresh chance at happiness has arrived!’

I’ve been chewing nicotine gum for 12 years. I haven’t had a cigarette in 10 years. So you might say the gum works, except now I have a gum problem. I am so addicted to the gum that I have to order it from special ‘dealers’ in bulk on eBay. I get gum on all the bedding. I don’t think I will ever have a baby–in part because I can’t see getting off the gum during pregnancy. When it comes down to anything vs the gum, I always choose the gum.

Now let me just say, before we go any further, that if you’re thinking of using nicotine gum to quit smoking you should not let my experience scare you. I am the addict’s addict. Everything I touch turns to dopamine. I can even turn people into dopamine (ask me how!).

My first cigarette was a Marlboro red that I stole from my Dad and smoked alone in front of my bedroom mirror. I felt a sudden coldness in my lungs, exhaled sexily and then the room spun around. The vertigo scared me, as do all abrupt shifts in consciousness (I prefer a steady high). I was 14.

My next cigarettes, at 16, were Marlboro Lights that I shared with a boyfriend under the stars. They were makeout cigarettes–cigarettes of romance, possibility and freedom. I noticed that when I smoked I became less hungry, which I loved, because I really wanted to be skinny.

Cigarettes soon became meal postponers, or–when paired with Diet Coke and Trident cinnamon gum–meal replacements. I quickly became a pack a day smoker, often two, and required a cigarette smoked out my bedroom window just to leave the house in the morning. I smoked outside the gym. I smoked on rollerblades. I smoked Marlboro Lights and Parliaments, vanilla bidis and cloves. During a Jim Morrison phase I smoked American Spirits.

My Mom didn’t smell my cigarettes because of my Dad’s smoking. She believed that my Dad had quit, even though the car was full of ash, the garage was full of butts, and she saw him smoking through the window every night. My Mom would watch my Dad smoke and say: No he doesn’t smoke. So the smell of cigarettes somehow equated a non-smoker. I was left alone.

I then went to college and the logistics of my smoking became an issue. I had a roommate who claimed to be a smoker, but she was a ‘social smoker’ and I was a never-not-smoking smoker. When she saw and smelled the level of my compulsion she issued a moratorium on smoking in our room. The room then became an unsafe place for me, as was any place where I couldn’t smoke.

Thus commenced a cycle of smoking regulations by other roommates and friends. I preferred to chain smoke in isolation rather than not smoke amongst others. I only felt comfortable around people who smoked like me (every moment, back to back, like breathing). Cigarettes had become a problem, and the problem was: how could I consume enough of them while living in society?

I bought my first box of Nicorette at age 20 before a flight to London. I knew that I couldn’t get through the seven hours without some hits of nicotine and I don’t like suffering. On the flight, a glorious new chapter in the annals of my addictions was revealed to me. I discovered that I wasn’t fiending. I found that the gum even gave me a secret buzz. The best part was, nobody knew I was ‘smoking’ except me. I was home.

For the next few years I both smoked and chewed the gum. Sometimes I alternated between the two and sometimes I did a simultaneous smoke ‘n chew. Then, over time, the gum’s anytime-anywhere qualities won my heart. Nothing enhances addiction like access and secrecy, and the gum trumps cigarettes in both.

Imagine you have a special friend you can take with you into any situation. This friend makes you comfortable in your own skin. It helps you not need other people so much. The friend protects you from life and nobody has to know about it but you. Just put the friend in your mouth.

The way you chew nicotine gum is not to actually chew it. When you first pop a piece of nicotine gum you give it one to two quick chomps with your teeth then park it, so the nicotine can seep in through your gums or tongue. I’m a left side cheek parker, and my proclivity to stick to one side has led to some health scares.

There was a period when the whole left side of my tongue and cheek turned bright white. I was sure I had oral cancer, but the dentist said it was irritation from the intense flavor of the gum. I began rotating mouth-sides and made the sad transition away from more intense flavors, like ‘coated fruit chill’, ‘coated cinnamon’ and ‘coated mint’ Nicorette, into the gentler realm of Habitrol. Habitrol possesses a creamier quality—like a marshmallow vs a candy cane. At no time did I say I’m giving up the gum.

I’ve also spoken with some physicians about the gum. They said that chewing the gum is better than smoking, but the constant nicotine is probably bad for my heart. But I feel like I have two hearts, a physical heart and an emotional one. And while the gum may have an adverse affect on my physical heart, it does wonders for my emotional one. It balasts and buffers, nurtures and excites. I guess I value my emotional heart most.

I do recognize that my dependence on the gum reflects an inability to be still with myself, to be alone with the present moment. But these are sacrifices I am willing to make to have an ally in this world: something that gives me a feeling of control, excitement, meaning, structure.

Like, I just want to be okay in this world. And it feels good to know that something really has my back, even if it makes my life small and then kills me.