A Review of Jeff VanderMeer’s Annihilation 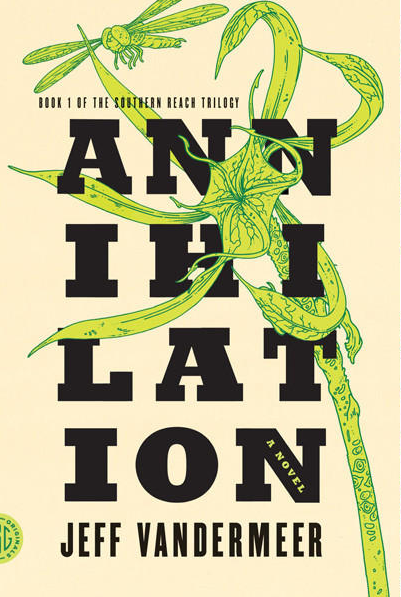 In a comment section discussion on i09, Jeff VanderMeer divulged the inspiration for his novel Annihilation: his hikes through St. Marks National Wildlife Refuge in northern Florida and a dream he had of descending into a dark tower below ground, following some kind of presence. Indeed, reading Annihilation, the first installment in VanderMeer’s Southern Reach Trilogy (all to be published in 2014), is often like being dragged through a nightmare. Here is a landscape in which everything is exactly as it appears—insofar as it is an impenetrable unknown; an inexplicability the meaning of which does not matter, does not exist or both; a glaring human eye set into the socket of a dolphin’s face as it rises up from the marsh.

The book is presented as a series of journal entries written by a character known only as “the biologist,” one member of a four-woman expedition sent to explore the mysterious and pulp fiction-y “Area X.” The reader encounters the environment as the biologist does, in real time, and from the very first line we are alerted to the unexpectedness—the unreality—of the place in which we find ourselves:  “The tower, which was not supposed to be there, plunges into the earth.” Immediately, there is an implication from sometime before the book: a way it should have been, though this is not it. And further, VanderMeer asserts, the should-have-been was only ever a façade; and this is a space—within the book, within the environment—which generates a logic totally its own.

Narratively, the landscape is the subject of study here. Even the characters are only referred to via their individual means of engaging the environment. There is the biologist, the psychologist, the surveyor, the anthropologist. And yet Area X continuously defies all attempts at identification or classification, quickly subsumes and renders useless the samples taken by the biologist or the maps of the surveyor. Without any way to access the biologist and the reader can do little but continue to press forward, and reading becomes something like playing a survival-horror video game. Meanwhile the landscape encroaches continuously, across both space and time, even infiltrating the psyche of our narrator, who wonders if she’s “changing sides” and experiences “an unsettling sensation, as of something creeping under my skin, forming a layer that perfectly mimicked the one that could be seen.”

Jeff VanderMeer is perhaps best known as a proponent and practitioner of the so-called “New Weird.” In 2007, alongside wife Anne VanderMeer, he edited a collection titled The New Weird, which sought to define the burgeoning genre, for better or worse, in both abstract terms and by way of example. The VanderMeers cast the genre as a sort of spec-fic amalgamation of science fiction, fantasy, and horror elements, of an often Lovecraftian nature, yet grounded in an urban, or at least more “real(istic)” setting.

In many ways, Annihilation feels like a kind of come-one-come-all introduction to the genre—an accessible, action-fueled quick read. This book is strange, but it’s not the unadulterated sci-fi grotesqueries of New Weird in-law China Mieville, for example. It’s no surprise really that the Southern Reach Trilogy—of which only two of the three have yet been published—has already been optioned to Paramount, with film adaptions forthcoming. This is a book that would be easy to market to fans of Lost, with its mysterious premise and wild locale backdropped against the titular and enigmatic Southern Reach, the organization responsible for sending the expeditions into Area X. Indeed, in the early parts of this book I was reminded often of the feelings I’d experienced in those early days of Lost when nobody had any idea what was going on, when anything and everything seemed possible, before we got stuck down in that hatch for fifteen episodes. The book is at its best when the unknown feels most totalizing, when it seems like that dark tower might just extend down into the earth infinitely. The illogically sized dark space naturally calls to mind Danielewski’s own labyrinth, and here, the horror operates in much the same way as it does in House of Leaves—it’s not what’s down there, but what could be down there, not so much what the words traced along the interior of the tower—“ a kind of dark, incomprehensible sermon”—specifically say, but what they imply: an author, a conscience, an other somewhere off in the dark.

Unfortunately, also like Lost, some of the novelty of the book wears off at a certain point, and VanderMeer seeks to fill in the gaps between the high-concept uncanniness with characterization and flashbacks to the biologist’s life outside of Area X. And while some of this is useful, particularly in expanding the range of his world and its implications (as well as laying some groundwork for the two books still to come one imagines), much of the characterization doesn’t hold up under much scrutiny. The relationship between the biologist and her husband for instance—which is a large motivating factor in the biologist’s original decision to enter Area X—seems built on little more than VanderMeer’s (and/or the biologist’s) insistence on the “opposites attract” cliché. It’s not that the relationship seems unrealistic in the scenes in which we see the two together, so much as it seems inconceivable that they would ever get together in the first place.

Authority, the second installment of the Southern Reach Trilogy, was published in May of this year and according to VanderMeer, the book explores the machinations of the Southern Reach organization itself. The third book, titled Acceptance, is forthcoming in September. Inside these sequels one can most likely expect to find some answers to some of the mysteries set up in Annihilation, though I hope not too many. As in dreams, where our fascination surely lies in the access to totalizing possibility, where the only operating rationale is constructed and contained therein, the New Weird must surely confront logic and the waking world like Area X itself: “without surrendering the foundations of its otherness as it becomes what it encounters.”