Listen: A Review of Ella Longpre’s How to Keep You Alive 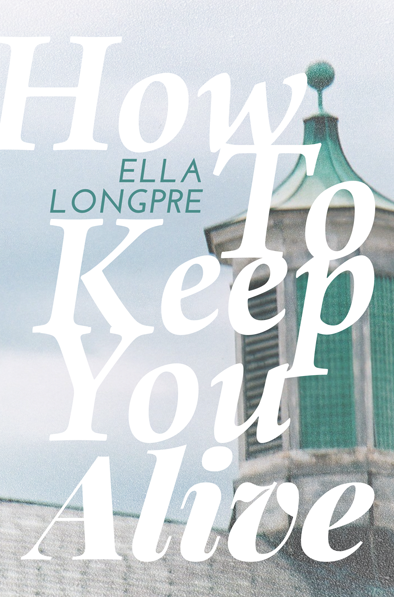 Later last year Civil Coping Mechanisms published a piece of anti-memoir by Ella Longpre called How to Keep You Alive. If you turn it over in your hands you’ll sense it is a slim work containing disjointed narrative, images like intrusive thoughts, echoes of confession tethered to its spine. If you’re like me, you’re wondering what the hell anti-memoir is. Looking through CCM’s catalogue, you’ll actually see anti-memoir as one of the book’s keywords with memoir being nowhere in sight.

A quick Google search yields some idea as to what it means: an opposition to memoir and its concrete observations from the narrator, essentially.

Not answering any of your questions yet? I was in the same boat before reading How to Keep You Alive, but listen to me: I haven’t read anything quite like this. You can place a label on it but it defies that kinda recognition being this book acts as a trapped voice trying to unfurl a history that ensnares itself over its own roots.

Ella Longpre has this way of letting you in one some secrets but only just enough to tease the senses. If you ask me what this book is about I’d probably smirk like an idiot and say, pour yourself something warm and sit by the window and just read it. But that’s a cop-out, isn’t it? Alright, alright. Fine, I’ll do my best to tell you what I got out of it.

Early on in the book you get this, “Ruin as a positive change. Not positive…as in beneficial. But as in: growth.” This idea of ruin plants itself and blooms throughout the narrative, oftentimes interspersed among the splintered observations of the voice as if culling forth explanations for the mania. Ruin itself implies time: something beautiful stands, something then breaks it down, until it remains as only a faded memory of what it once was. But the beauty is still there somewhere, isn’t it?

I thought a lot about this concept as I read the book, the echoes of Faulknerian adages of that past is never past, and whether or not there is any truth to it. In this world there is no past or future, as in the world of the book–wounds swelter and fold into the rot of the now, if you were damaged then you are damaged now and of course it repeats, and repeats, and repeats. Picture this from an artist’s perspective: the past can be either fodder or fuel for creative endeavors, and if it’s the main focus for your work then you allow yourself to relive past on a near daily basis. How much art stems from happiness? Or at least comes from a place of contentedness. Is art about creating beauty or reclaiming it?

Longpre’s book relies heavily on ruin as means for creation and mending time into a coherent field. And all this begins in a single space where it all bleeds together. A room. Not just any room, but the room where it all began. The room where it happened, whatever happened. The room where you threw the stone at the mirror and the shards became time itself. The room contains all that you were, are, and will continue to be all at once as cosmos of broken glass buckshot over the floor. An event, an occurrence, a ritual, a daily incantation contingent on your approach for moving forward. Do you sweep the up the wastes, or painstakingly puzzle together the shards with bloodied fingers using memory to repair what once was?

I thought about all this and more, thumbing and marking up the pages not relating to the narrative’s traumatic experiences but rather understanding them through a surgical analysis of my own.

Years ago I met someone and in my haste to be loved trusted them with a warmth I held for so few and understood even less. They knew this. And one night we went into a room I’d been to several times before, so many times I should have recollected it to you with ease but couldn’t. They gave me something and the world became a postmodern smear and cradled on into nothing. I awoke and felt like a body propped by heat and nausea.

“The room contains the narrative.”

Anyone who has gone through some sort of emotional trauma knows every intricate detail of the place where it started, and no matter where they go this room superimposes itself over reality without warning. In this way we relive the guts and violence of it all, and for some creatives this acts as a means of creation. When the world becomes quiet and everyone seems dead or shunted off into a reality that no longer concerns you, you’re left thinking. Alone, a wound with a tongue and restlessness, remembering every single thing that happened to you.

Sometimes these thoughts come and go, other-times death appears to be the cure-all and the only absolute. But you have to stay alive. But what does it mean to stay alive? How do you keep yourself alive?

For an artist creation is bloodletting, and in this way the poison of what happened clouds outward into the public so maybe they can understand. It’s all one can hope for in these circumstances, the possibility of some stranger nodding their heads to the works we’ve created will always outweigh the certainty that we can’t unfuck ourselves from the past.

In Longpre’s book, writing gives voice–we “speak to escape”. Or rather, we speak to escape, but we write to remember. And the more we do so, the less abstract our nightmares become, the violence and fuzz of it all becomes tangible, human, something to reach out for and bear witness to. Our past is our past, art becomes less of a creation of beauty and more of a reclaiming of our lives. Some choose to forget these traumas, for me it isn’t possible.

This is how I remember it, the schizoid colors, the glass-webbed senses, the pure and honest to god stating of the facts saying, I was raped and made gristle by them in a college dorm room while our bodies became animals, became wounds.

I recognize and unfurl it for you.

This is how I stay alive.

My body is my body, my name is my name, I know the facts of my being and here I am now telling you this. This is how I stay alive. I can’t cast myself off to that darkness of forgetting. To deny myself of that past would be to waste everything. This is who I am, and this is what I do.

You disassociate yourself from yourself after a traumatic experience as a means of coping, and as an artist looking to your past self from the present ask, how do I keep you [myself] alive? Through writing about it? Why don’t I just off myself? Is it worth dredging over what happened? So many questions because ultimately you want to live, to survive, to endure. Not because you must, but because you can. And that choice makes all the difference. I choose.

This is how I stay alive.