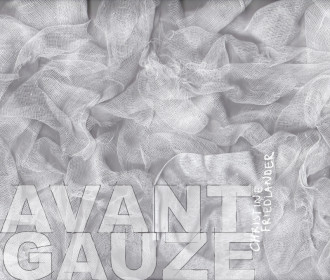 I am not terrified of blood, but I have seen what it can do. I have seen it drip and blossom, and I have seen a clot larger than the size of my fist fall forced from my nasal passage into a metal dish. When you tilt your head back, you can taste it. The only way they made it stop was by burning it shut.

Christine Friedlander’s AVANT GAUZE is a book about blood, and one that understands that not all wounds bleed. There is also the absence of blood, the aftermath, the scabbing. There are bruises. This is a book about the use of blank space. Minimal text-based pages stand in stark comparison to the highly elaborate collage art, layer upon layer of photograph, paper, text, ink, gauze. So we look for meaning in the layers. And we look for layers within the blank. One thing about gauze is its loose weave. That the fabric is successful in that it leaves space, this space being just as important for the structure of the bandage as the fibers themselves.

Friedlander writes, “What if a long pause is all I know?” And we look into the blank and we know. What can we say. In a cut, we bleed out from the space between. This book is our space. We, those who have felt and experienced male violence, whose reality is permanently shaped. This book understands us, and exists for us in its many textures and folds. It is an empathetic act, to write a book “In which I only partially exist.” In the reality of a world controlled so maniacally by violence, what else can we do: “I repurpose my hands / for something greater than myself.”

I am not terrified of blood but I am sometimes terrified of men. The first time I had sex I did not bleed, even though they said I would. And when I was fucked without consent, I also did not bleed. There were no cuts, marks, or bruises. There was only blank space.

Reading this book felt like participating in the making of this book, which simultaneously excited and exasperated me, if only because we are made so privy to the creative process that we cannot escape it: “Writers poking their tips in places they don’t belong.” “WRITE WHAT YOU KNOW,” echoes Friedlander in bold white type on top of black. “WRITE WHAT YOU KNOW (OR ELSE).” These comments that absolutely call to mind undergraduate creative writing courses for me of course don’t come as a surprise. As women we are used to this. As victims we are used to this. “Can you be more specific?” says a professor to his student about scene involving sexual violence. Elaborate on that which tears you to pieces. In fiction workshop, I wrote a sex scene about a drunk woman. I sat for over thirty minutes as the class decided whether or not it was consensual. In poetry workshop I wrote about Persephone. “Everything is called // DOMESTIC VIOLENCE // or // LAND RAPE // or // ON LOSING HER INNOCENCE IN WINTER, 800 B.C.E.”; It gets repetitive. Our obsession. We are all fanatics of Persephone as long as men keep killing us.

The mention of the murder-suicide in the preface of AVANT GAUZE acts as a warp thread, a steady, vertical guide around which other fibers are spun to make a strip of gauze: “To write around the space where the erasure took place.” We understand throughout the book that Friedlander is writing about personal trauma, but accesses this trauma through other stories, other devastating events: “In October 2011, a relative of mine beat his wife to death with a rolling pin / and shot his two young children in their sleep before ending his own life.” We begin with this absolutely clear knowledge of violence, and this secondary knowledge that there’s something else, other memories of assault lingering below the surface, curled in tendrils around this singular event. In this way, AVANT GAUZE presents us with the anti-narrative—a story told through multiple shards of other stories, a story told through non-stories.

AVANT GAUZE is obsessed with the collection of stories: trauma survivors, Holocaust victims. In them, we become so engaged with the victims of violence, we seem them so intensely, we see ourselves in them—we can’t not. I try to separate my own experience from Friedlander’s as I write this review, and continually find it impossible. Friedlander deeply understands these two opposite pulls: knowing that you feel kinship with another survivor, or a story of survival, but also knowing that the act of drawing comparisons between yourself and another’s suffering is itself a form of oppression, “the violences of creating narrative without consent.” As Friedlander argues, “Just because I can open oven doors doesn’t mean I should open oven doors.” Just because we see ourselves in this book doesn’t mean we’re a part of it. And yet.

We are a part of this book because we are always, every page, invited in. Friedlander demands that we engage with the text on an intimate level—each collage requires time in order to understand its many interlocking pieces. In “GAUZE FOR POINT-BLANKING,” even the medium itself is layered: gauze and acrylic on The Daily News printout. Friedlander splices digital—this is a printout of an online article, we can see from the “Comments (303)”—with material: gauze, paint, and paper. In this, she causes disturbance, a kind of visual white noise. Through the gauze, we can see, but our entire perception has been drastically changed.

After the release of AVANT GAUZE, Friedlander posted a Facebook status about a supplement to the book called “THE GAUZE SCROLL.” Several copies of the book were delivered with an additional piece of gauze art that readers were then asked to respond to in any way they felt fit. The responses were then collected on a website and digitally “threaded” into one uniform scroll. Here again we see how for Friedlander, AVANT GAUZE extends beyond text, beyond the page. The book exists in a tangible space that can change and adapt, can grow with the help of needle and thread and/or hyperlinks. The book grows with us because it is ours as much as it can never be.

Eventually, Friedlander seems to conclude, the ability to create a polished manuscript about violence is a moot point: “There are no words that will fill the whole of you.” We may desire to make our stories follow a satisfying narrative arc, go somewhere, mean something—as many of us have been guided to do in workshop, see: “narrative repair”—when really the answer to writing and reading narratives of trauma perhaps is to come to terms with their inherent messiness. That they don’t always interact and overlap in ways that may sense. AVANT GAUZE is a beautiful, chaotic, overflowing art object.

The adage that poetry “heals all wounds” is as damaging as the assumption that all wounds bleed. Healing, in the traditional sense, isn’t always an option. In order to do justice to pain, to acknowledge the realness of violence and the existence of survivors, one cannot follow these rules as prescribed. Like gauze, writing is not medicine. Gauze aids in helping the body learn to seal its wounds, but it can also cover up: it blocks out feeling: “To feel myself without feeling myself.”

Apply pressure. Stop the flow. But what if we must flow? I’d argue that AVANT GAUZE settles on an entirely different language of trauma, one that shifts away from “healing,” the need to “fix” and be “fixed.” The book has a sense of urgency like nothing else I’ve ever read. And reaches out towards this new poetics: “To each their own nation of disrepair.”