3 Artists That Made Me Not Want to Die This Winter

The whole world is salt. The air is salt, the roads are salt, the sidewalks are salt, our water is even salt. The salt is coating all of us in Philadelphia and it is hard to give a shit about anything when you are one of the Salt People. The cold and slush have gotten to our bones and brain, the sky is nonstop gray, everyone has gotten very quiet, it feels as if the world here has quit after the days and weeks of snow. Or maybe it hasn’t. Maybe it is just me. Maybe only I have stopped, maybe I am the only Salt Person, or maybe the whole city is now a city of Salt People, all of us moving so quietly, slowly, sadly that it seems none of us are here at all.

I don’t know why the pieces of art make me hopeful. Maybe it is because they prove that a human somewhere who wasn’t salt had an idea and loved that idea enough that they created it and that creation is in this room and the creation is a physical way to see into their mind, even for a moment. Maybe there is something beautiful in that. Maybe it’s a reason to keep getting out of bed. Or maybe it is the element of surprise, the process of moving from room to room until you discover the one, the piece that’s going to make your brain and body light up, each of your cells going electric immediately. Maybe electricity is the opposite of salt, maybe it is a war we are in between these two things at all times. 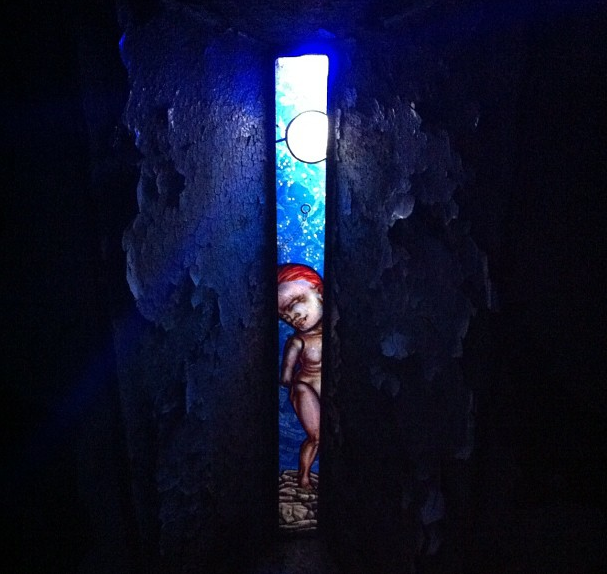 What happens when you take stained glass out of a church and put it into an old penitentiary? That was my first exposure to Judith Schaechter’s work, an installation of her stained glass pieces backlit in the small cells of Philadelphia’s Eastern State Penitentiary, the first penitentiary in America, which opened in 1829. Back then, the theory was that you could toss a criminal into a small cell with a Bible and let God do the hard work, which they did do for criminals ranging from common thieves to Al Capone. The massive penitentiary is open for tours (you can see Capone’s prison cell), and also features art installations.

Each cellblock has one slim skylight, which was allegedly known as “The Eye of God.” Schaechter’s first eight cellblocks replaced the clear glass with stained glass that focused on myths: Icarus and Prometheus, for instance.

Touring the haunted penitentiary at night, Schaechter’s pieces made each cell glow red, blue, yellow, green, depending on the dominant hue of the glass. All around her work, the old walls of the penitentiary peeled their paint and it hung down in shards and shreds. Stepping into each cellblock and looking up recalled stepping into church, her artwork glowing and radiating above you. This is the thing about her work: Since the medium is stained glass, the colors are so brilliant that it almost hurts to stare at them, as if they are slices into another world.

Since then, the pieces from Eastern State have moved to new locations (I believe the Claire Oliver Gallery in NYC has them). But my obsession with her work hasn’t lapsed, and this winter I’ve especially turned to her bright, beautiful, almost violent work.

In her book, Extra Virgin, the rest of Schaechter’s work feels less about myth and more about women. In piece after piece, women are vomiting flowers, cleaning up messes on the floor, prostrating themselves on their knees before an audience that is you. Schaechter has said that her two biggest influences growing up were MAD Magazine and Picasso replications, which feels exactly right whenever I look at the faces she’s created in the glass. 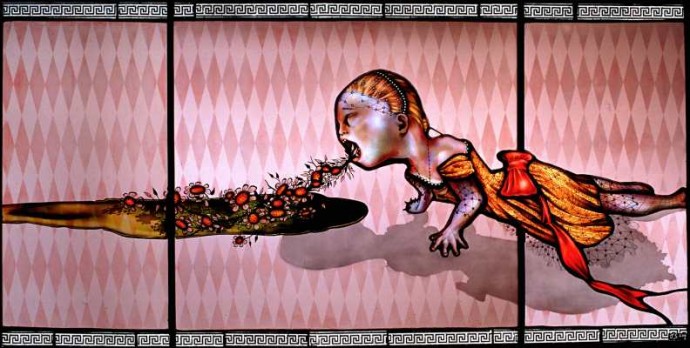 The faces of Schaechter’s women are typically contorted into grimaces so painful that it aches to see them, it aches to see your own ache on their faces, because that ache is inside of you, too. 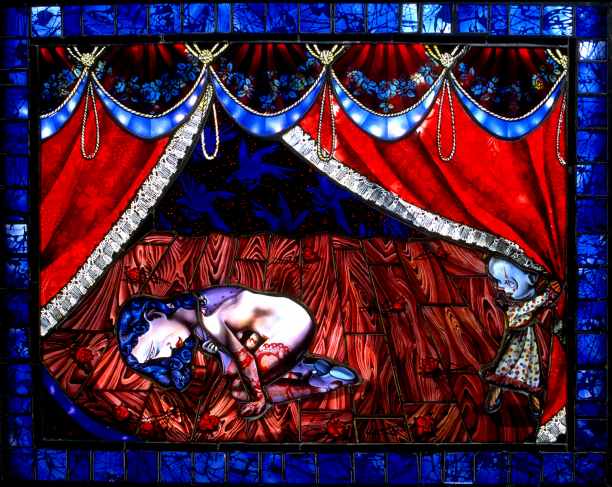 “Slut of the Year” by Judith Schaechter

These women are in such pain but with perfect bodies, these women in such pain but completing their tasks, resplendent in torn lace, surrounded by strange birds, standing beneath constellations, the glass Schaechter has worked so tirelessly to color and shade making these women bright despite their terrible states, those hues glowing out onto your skin, the way you are bathed in that specific light.

I won’t go into the strides she’s made in process – she’s using techniques with stained glass that I am fairly sure haven’t been done before. But the result is incredible. I could look at her work forever, all day, always finding something new in the layers of glass, in the way she’s made hues overlap, in the things she’s built into these women, the level of detail. There is hope in that. 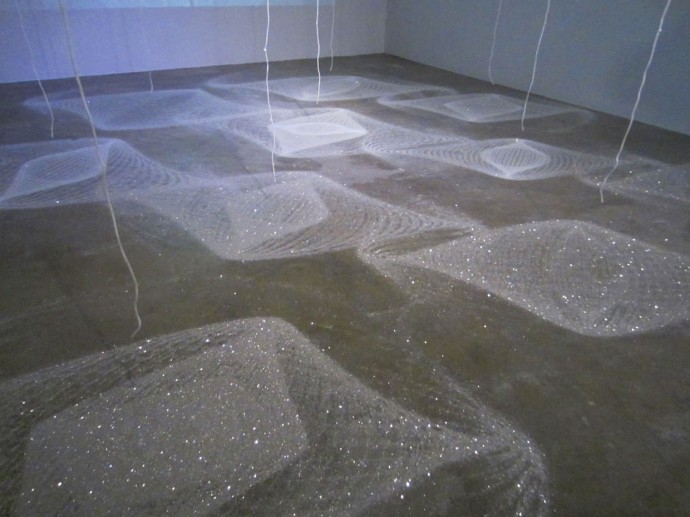 “and upon each stood a siren, borne around in its revolution” by Field Kallop

It never occurred to me that once in my life I would see diamond dust, I never knew anything called diamond dust existed, but here it was – and it was fucking beautiful, otherworldly, glistening on the floor in such an infinitesimal way that the glittering was almost impossible to pinpoint. Beyond that, the attention to the patterns, the attention necessary to make the pendulum create such intricate shapes in the dust was incredible. 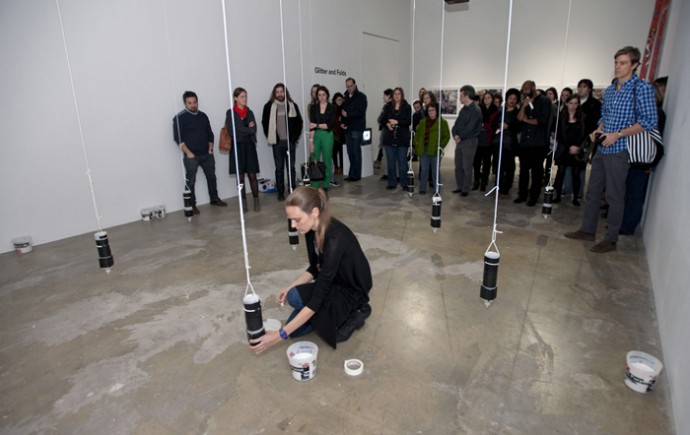 Apparently Field Kallop would show up every three days or so to put the diamond dust into evenly distributed piles and then use a homemade pendulum to do site-specific formations of the dust into patterns that would wear away slowly, day after day, eventually down into nothing.

I don’t have any grand statements about this work, or about the artist. Rather, instead, I feel strongly about this piece as a process of invention, of creating something no one expected to see before. This is the height of the bar we should all be trying to reach, that’s how it feels in my bones, and sometimes you just have to see piles of diamond dust on the floor to believe it can happen, to remind yourself what you’re working toward.

I like to think of James Turrell as the Cormac McCarthy of light art. He sometimes wears a cowboy hat and sports a strong white beard. He has a relationship with the sky and recreating the sky on the ground that almost none of us can understand. When I think of James Turrell, I can feel him holding my hand and his hand is rough, so rough, thickest skin. I feel him leading me somewhere good. 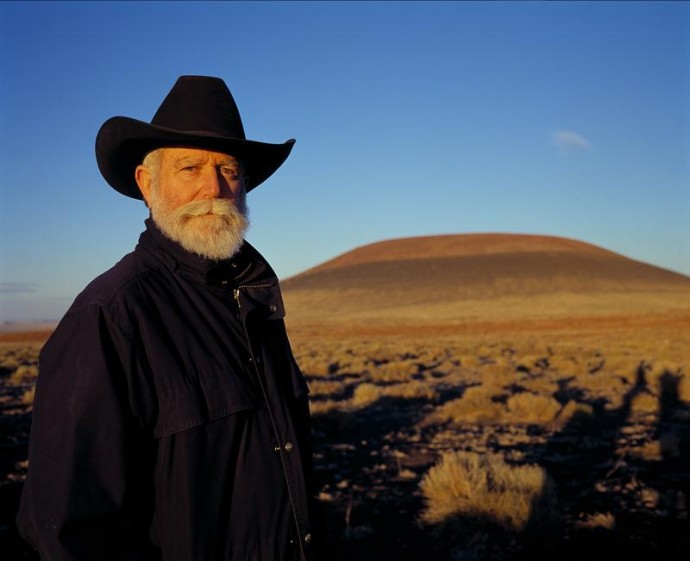 Turrell creates light art, atmospheres, experiences. His art isn’t a canvas on a wall, it is the air between you and the light and the walls and the room and there is no canvas, just the color and hue he has presented you with. He creates black rooms with hovering glowing boxes, worlds of purple color to step into, corners of light bursting out of blackness that draw you closer and closer to the softness of that glow, he develops naked eye observatories throughout the world so you can see the sky from the vantage points he’s deemed to be the most beautiful, all create with simple architecture that lets the world open up before the viewer.

The first time I saw Turrell’s work was at the Guggenheim, his first major exhibition there since the 1980s. The piece that everyone was humming about was Aten Reign, and for good reason.

It’s almost impossible to describe Aten Reign. Crowds packed the center of the Guggenheim, the massive ceiling transformed into a tiered sky. I laid down on my back on a mat and Aten Reign reached around the periphery of my vision, encompassing everything I saw. The oval layers of fabricated sky above me began to change colors, smoothing and soothing from pink to purple to green to electric purple then to grey then to white then to aqua then to mint then to an orange so light it was unbearable. 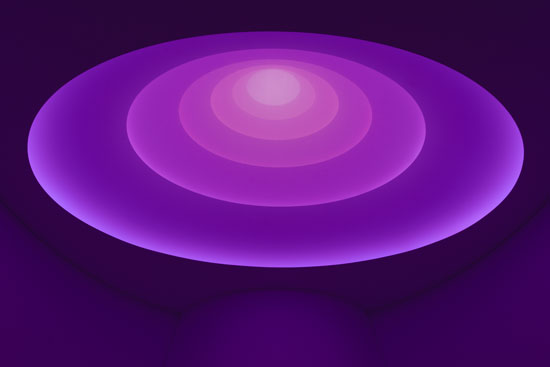 As the colors shifted above, I could feel their pulse. Turrell created the change in colors with a specific tune in mind, Aten Reign returning to grey, black, and white between electric bursts of hot pink to rest the eye, to make the next burst even more beautiful. It was one of the most incredible things I’ve ever seen, even in the crowd it was one of the most personal experiences I’ve ever had with art, like staring back into the world womb, into the place we all came from, and being reassured. Aten Reign is gone now, and since it was site specific, it will never be seen again. It’s a piece I still lust after, a place I want to go back to again and again, but it is gone in a way that hurts, as if Aten Reign created a new space or dimension, and now a lack exists where it once was, a hole.

There’s a Turrell quote that I think sums up the experience, which I will forever fail at putting into words:

Point being, I can’t tell you precisely why his work is beautiful, because his work is like staring into your own chest and your own hope and your own relationship with life and death and the world. Maybe no one can tell you why his work is beautiful, because it will be beautiful to you in its own way, in such a personal way that it will feel like Turrell created a tunnel for your body to let your heart out through your eyes. The thought of that alone is a way to not die in all this salt, it’s a way to remember there is still always the sun, for now. 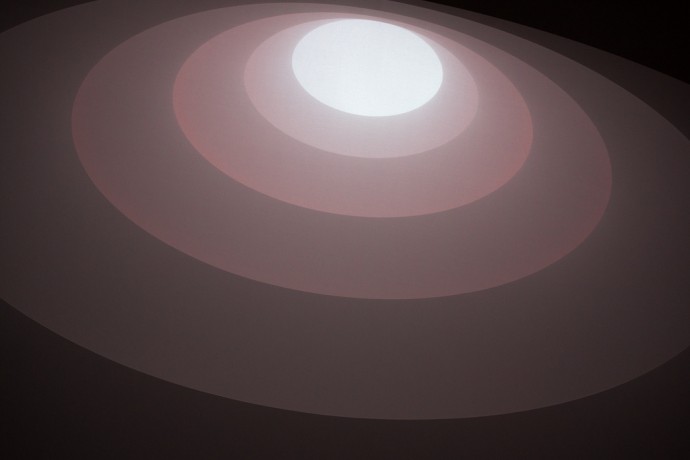