Women: An Interview with Chloe Caldwell

As you read Women by Chloe Caldwell, you are swept in very closely next to a voice telling its story, but it doesn’t feel dirty or a violation of privacy or voyeuristic. The voice really wants you to read it, to care, and to continue reading it. I found it to be one of the most tightly-written, deeply personal books I have read in years. Despite the way that it feels like it’s non-fiction–as it may well be–it also feels weird, with a sense of play. It took me over a month to finish it because I kept wanting to savor it, and I did.

Caldwell’s novella is out on Short Flight / Long Drive Books, a publisher based in Ann Arbor and run by Elizabeth Ellen, an author of similar style and skill. Much like Chelsea Martin’s Even Though I Don’t Miss You, another book from that press, Women has a stripped down, bare bones feeling. And yet, there is  sense of the universal at work, from the very cover with it’s simply presented title. The scope almost simultaneously feels detached and up-close. I already used the word “personal”, but this is me using it again.

I asked Chloe some questions about her book and other topics. She responded, and those responses are below… 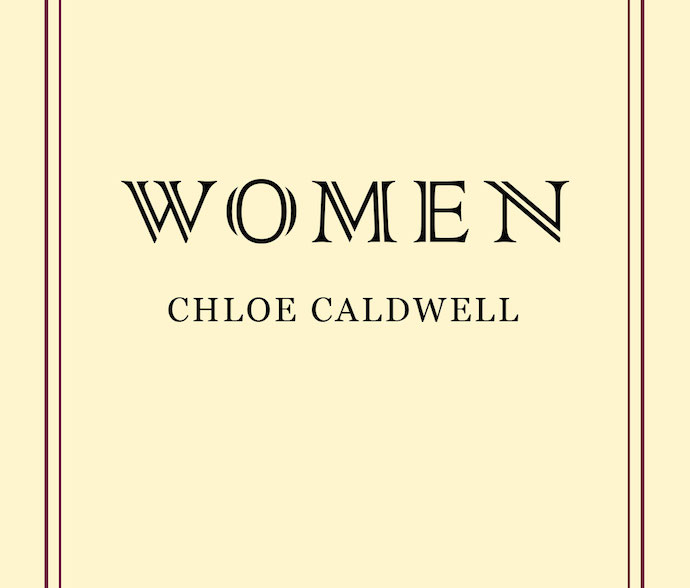 What first made you want to write?

It was fun, and it helped me to feel alive. I was documenting every second of my life while sitting on the subway in my journal, and I kept going with it, because it brought me pleasure. I worked for a jewelry designer in the west village and she knew how much I loved writing, so she helped me pay for classes at Gotham, and bought me a computer for my twenty-­first birthday. Then I was hooked.

Describe the moment when you knew this book was done.

You just know. There’s not really a word for it. I still don’t think it’s done. Rather, I think it could have been fifty pages shorter or fifty pages longer. But sometimes I think of scenes I deleted and forgot to put back in or I think of something that would have been funny and it drives me crazy! Oh, well. And I think 150 pages was sort of our end goal. I don’t remember the moment, I wish I did.

It took me one year. I began writing the book half­heartedly in late summer of 2013 and finished summer 2014.

Were there any models you used as inspiration?

Yeah, quite a few. The novels Intimacy by Hanif Kureshi, Loverboy by Victoria Redel, The Lover by Marguerite Duras, Bonsai by Alejandro Zambro, The End of the Story by Lydia Davis, The Buddhist by Dodie Bellamy. I also kept Stag Leap by Sharon Olds, Coeur De Lion by Ariana Reines, Chronology of Water by Lidia Yuknavitch on my desk.

How was it working with Hobart & SF/LD Books & Elizabeth Ellen?

Oh my god, she’s the worst. Such a bitch! I’m just kidding. It was beautiful, when I look back on it, I can’t believe it happened. I loved how we were in our own secret world, prior to publishing. She was so committed to every little sentence in the book. She challenged me so much. The edits were kind of heavy. She’d email them to me and we’d talk on the phone (and once we met in Myrtle Beach and once in Ann Arbor with fresh manuscripts) and then I’d go to work for another month or two. We did this like 5 times. She’s recommend me books and movies to watch that would help with the writing. It was a really special and good experience.

How did it compare to your experiences publishing with Future Tense Books?

Future Tense was a lot of one-on-one edits as well. But we knew that it was a collection of essays, and I had written essays before, whereas with Women, the book was taking shape as we worked on it, and I’d never written a novella. I tried a lot of different styles. I had title chapters for a while and stuff like that. It was in many forms before the one people are reading, which somehow seems ridiculous now. With Legs Get Led Astray and Future Tense, I didn’t have to think of a story line or last sentence or anything, just which essay would go last.

When did you know your book had formed around the word that is it’s title: Women?

I don’t know. One of my friends referred to it as The Women Book when we talked about it. Before that we referred to as The Dyke Book, The Dyke Novella, and before that, Rollercoaster. For many months it was Dyke Aching. Though the book is based on the narrator and her relationship with Finn, there are dozens of other women sprinkled throughout, and this is the narrator’s first time with a woman, so the word “women” has a few meanings. What I like about it is that the book is so nuanced, but with such a general and vague title. I specifically remember texting EE, and being like, “What if we called it Women,” and she said, “Dude, Women would be sooooo funny.”

You grew up in Hudson, NY right? Did you like living there? I went to Bard College, and it seemed like in that area of the Hudson Valley there was always a divide between people who had moved there who were involved in education, arts, etc. and those who had lived there for a long time and were more connected to a dying economy. Did you see it that way or was I just caught in a college­-hamlet bubble?

No, I didn’t grow up in Hudson. I grew up in a town called Spencertown, forty-five minutes away from Hudson with about 300 people, and went to public school in a town called Chatham. We used to drive to Hudson once in a blue moon while smoking weed, to go to Dunkin’ Donuts or Taco Bell or Walmart or Coconuts for CDs and tapes. We didn’t go into the trendy part of town, not that it was trendy back then, and not that we would know because we weren’t of drinking age. And at twenty years old I moved to NYC from my Spencertown, so I wasn’t super familiar with the conflict you speak of.

When I was twenty-­three and living in New York City my dad moved his music store from Chatham to Hudson since Hudson had more foot traffic and musicians, etc. So I’d take the Amtrak from NYC into Hudson to visit, though not very often. Later, since my dad lived there and I was close with him and he had this sweet store and loft apartment, I lived in Hudson and worked at the music store to save money in between every city I was moving to. It was a transient place for me. Last year, I moved back here from Portland, and because of my advance from SF/LD I was able to get an apartment last March, so I’ll have been here for a year now. So I haven’t seen first hand the changes that Hudson has gone through, but I know that they exist!

But I get what you’re saying. Hudson attracts a lot of artists because it’s close to NYC and walkable and has some cool shit, but it’s pretentious and ridiculously expensive and doesn’t cater to the artists who live here, but to the weekender’s. That sucks–­­like, there’s no where for locals to buy produce or get a cheap taco, but there’s pricey cheese and vitamin shops and antiques for the weekenders. But, it’s a safe and beautiful place to live, and the location is convenient. My dad always says if you don’t like Hudson, wait a week. It’s always changing.

I used to think so, maybe, or I just wanted to try different places for fodder, ha. I went from Williamsburg to Greenpoint to Washington Heights to Inwood to Hudson to Berlin to Hudson to Seattle to Bushwick to Hudson to Portland to Hudson, kind of looking around for my spot. I’m conflicted­­–of course your setting affects you, but not as much as your mental state. If you deal with your mental state, you can be anywhere. But I do think we clash with where we live at some points.

For example, I had a horrible time when I lived in Berlin for a summer, even though it had so many things I wanted. If I lived there at a different point in my life, I might’ve never come back because I loved it so much. With Hudson, it was always too small for me when I was younger, there was no way I’d commit to living here as I was always off to what I thought were far more exciting adventures. But now it’s perfect for me. It’s what nourishes you at the time. Luckily, I’ve always known when my time somewhere was up. When I was twenty-­three I was totally afraid that if I didn’t leave NYC, I would wake up at thirty, an alcoholic waitress who’d never written anything. For me it was always about where I could afford to write more and work less. That wouldn’t work for many of my peers, because not having money would freak them out. I always put my writing before making money, which is a blessing and curse! So, I probably didn’t answer your question, but it’s a case by case scenario, right? Depends on the person. Some people will never be happy. (JK)

Do you ever find it is a hard line to walk between semi­autobiographical stories and straight­up non­fiction?

Sure. In nonfiction, you’re taking something from your life and carving it into a bigger universal meaning in a formulaic, narrative way. In fictionalized work, it’s storytelling, you can come up with symbolism and shit, in nonfiction you work with what you have for symbolism, you look head on at what is there, no hiding.

What writing are your working on now?

An essay collection, with some essays previously published and some new ones I’m writing. The working title is: I’ll Tell You In Person.