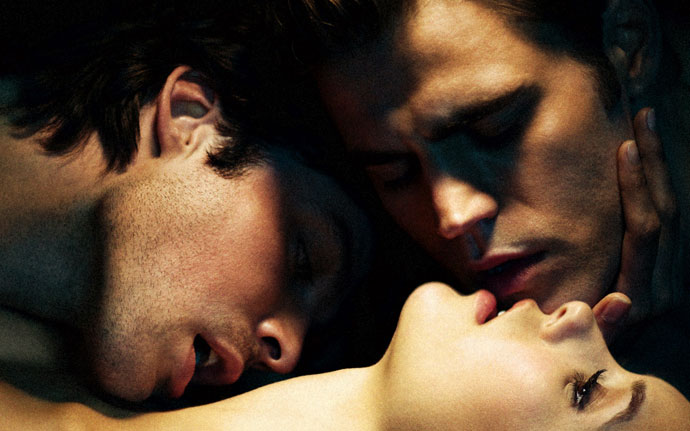 I never meant for this to be. But one furtive day of movie binging during a freak snow storm that wrecked the party potentials of Halloween weekend, I diversified a 3-stars-or-fewer Netflix horror movie binge with a television pilot in which folks both near and far had been urging me to indulge. Risking the shame that my selection might have yielded, courtesy of one of those sideways glances from my boyfriend, who sat by my side the whole day, I pressed Watch Now on the premier episode of the CW’s hit series Vampire Diaries, and with that our winter fate was sealed.

The initial premise of the show, which has since spiraled out into a fantasy playground of doppelgängers and hybrids, sire-bonds, ghosts, and Mayflower-era high priestesses, recounted the dramas of one teen ingenue who’s a magnet for the supernatural. The setting is Mystic Falls, a rather suggestively titled heritage town in Virginia. When we meet poor Elena Gilbert, she is preparing to return to high school after a summer of great tragedy. Both of her parents perished in a car crash, of which she was the sole survivor. But a studly, new kid at school, with impeccably coifed hair, presents himself as just the distraction that dear Elena requires. Little does she know that this is one of two vampire brethren that she will be poise betwixt for who-knows-how-many seasons to come, and hopefully just as many steamy promotional photo shoots. Her high school paramour is the 535-years-young Stefan, our show’s eternal-teen vegan vampire, who controls his urges in a very, well, Edward Cullen-esque capacity. When his evil older brother, the id-fueled Damon shows up, then the real fun begins. At first it’s all mysterious vapor clouds and crows, then Damon arrives fitting in some brutal and fun killing sprees, before normalizing into a potential love interest for Elena as the program ebbs into more delirious soap fodder. Launching twists and turns for our smitten kittens, Vampire Diaries sports many a cliffhanger that kept me up nights, far later than I should have, taking up Netflix on its instant-suggestion, to play the following episode, rather than be left guessing.

Oh, I was hooked. Season One of the show was especially darling, and the best, in my humble opinion, since humble, too, was the budget, which necessitated that scant sets provide the setting for Mystic Falls’ denizens. Spinning the town like some delicious 50s B-movie, just everyone seemed to naturally congregate to the local roadhouse (the Mystic Grill, of course). Which made it adorably quaint, in a way that worked for it. It made every conflict feel like a storm in a teacup. Mimicking the histrionics of teen life, this modesty of scale and almost school play-range of cast and set caused every plight to seem at once overblown, of mortal consequence and still restrained or local. It wasn’t necessarily in the show’s best interest to get all epic, which it did, and all-too-briskly, during a storyline in Season Two which introduced the Originals, a family of vamps that started it all. Since then, the program has sped along through three seasons, launching spectacular narratives that thrill. But oh, when one of those actors is forced to talk through the nonsense! In the few moments where the soapy, spectral proceedings are explained in dialogue, I get a glimpse of just what my obsession must look like from the outside. Trying with a straight face to defend the nature of a sire-bond or the logics of a doppelgänger curse yields no poetics. But fortunately, the show just guilelessly chugs along, never stopping too long to think about its swell swells.

Vampire Diaries is perhaps best understood as evolving from its original format, which were Young Adult trade paperbacks intended for avid (and ADD) teen consumption. First published in 1991, then relaunched in 2007, after Stephanie Meyer’s Twilight series proved publishing gold, the series penned by L. J. Smith, who, I guess publicly brought on a ghostwriter to relaunch the franchise, counts 10 books in its cycle. The success of Twilight and the CW network’s bloodlust for some similar, spooky syndicate defines the show, which was developed from the books by Scream and Dawson’s Creek-helmer, Kevin Williamson. A Twilight knock-off of the most immaculately generic pedigree, Vampire Diaries was initially explained to me as Dawson’s Creek with fangs and somehow, in the glorious and glossy nature of teen-marketed television, this is perhaps its greatest accomplishment. The show is a rubric for approximation, tacking tidbits from other successful and popular programs together, shamelessly, and blending them into a harrowing yet uncomplicated smoothie (and I’m not even going to go into the Civil War-era flashback sequences). Which could sound like an insult, if it weren’t so totally difficult to get the balance right, as far as pop entertainment is concerned. It explains the craze that’s built up around the show––the crossover appeal that it holds. I kept it close, as a guilty pleasure, for a while, but soon found out the reach of its appeal. Once a close friend and esteemed gallery director sung its praises, I threw caution to the wind and told strangers on the street about my new favorite show, rejoicing in the unfettered joy of the facsimile.

Like Dynasty before it (which was a Dallas knock off gone gold), Vampire Diaries emerges with a startlingly female gaze, objectifying the male physique, exemplified by both of Elena’s blood-sucking suitors, who are absurdly hot in the manner that befits the teen-marketed CW. Paul Wesley (Stefan Salvatore), a pouty television actor, who arrives to us courtesy of The Guiding Light (RIP), and the smoldering Ian Somerhalder (Damon Salvatore) who you’ll remember as a baddie from Lost, but I cling to more distant memories of the gay brooder in the forgettable Brett Easton Ellis adaptation, The Rules of Attraction. Here they’re both tarted up for mainstream consumption, wearing entirely too much makeup and lusty expressions to undie for. That wan patina has kept them from aging these three years, and, judging by the ratings, they’re not going anywhere for a while. Which makes the humans hilarious as they endlessly draw out high school story arcs. Surprisingly little has changed, for a show about death and the life beyond. Season Three comes to a close this Thursday and it seems as though we might lose a regular or two. But like most soaps of its now staple stature, Vampire Diaries never kills off anyone for very long. With witches, werewolves, ghosts, and vamps abound in the murky woods of Mystic Falls, it’s so much simpler––not to mention addictively enjoyable––to bring them back for another go, to revive the well-tread territory one more time, just like this delicious taste of familiar fruit.