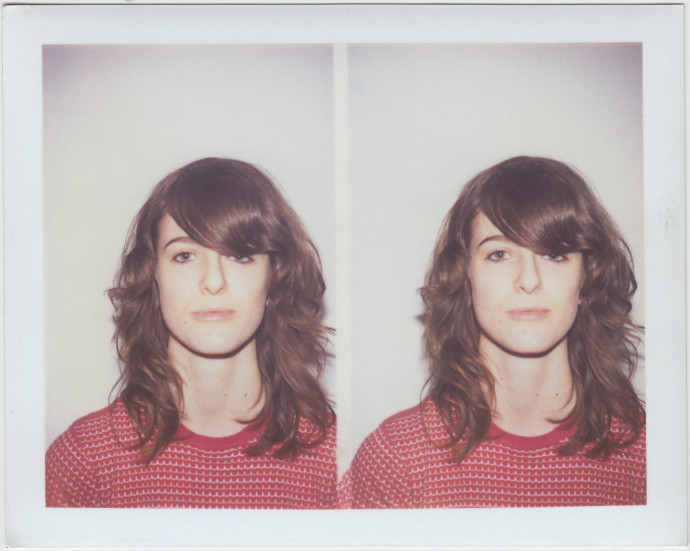 Polaroid of Chelsea Hodson at 17, taken while working at FedEx Kinko’s, before the film passport camera was replaced by a digital one.

The first time I heard Joanna Newsom, I was on the carpet of my crush’s living room floor. I was 17 and trying to make myself look approachable, maybe even alluring, maybe my crush would make a move. Instead, he played The Milk-Eyed Mender by Joanna Newsom, which had just been released (2004). I tried to keep up with my crush’s music knowledge, but he was always ahead of me, always found out about something great right before I had the chance to find it out for myself. My attraction to him was a way of being near the things he knew and hearing the things he heard—it was a kind of learning.

The first song, “Bridges and Balloons” played, and Newsom sang, We sailed away on a winter’s day / with fate as malleable as clay. I was immediately intrigued by the strangeness of her voice paired with the novelty of her main instrument, the harp. It was lovely and charming and sounded like it came from another time. A few days later, I bought the CD for myself and began listening to it every day. This was a time when that kind of obsession was visible: scratches marred the backside of the disc and made my favorites part skip.

A few months later, I went to Hotel Congress in Tucson, Arizona, to see Joanna Newsom open for Devendra Banhart (his album, Rejoicing in the Hands, had just been released). The show was so small they didn’t even play in the music venue part of the hotel, they played in the banquet room for about thirty other people. My older friends had driven two hours from Phoenix and got in just fine, but I had to beg a bouncer to let me in to the 21 and over show. I approached Newsom and asked if I could interview her for my zine the following night at her Phoenix show, and she said yes.

She played for about a hundred people that night at Modified Arts in downtown Phoenix. The simplicity of one woman alone on stage with her harp really impressed me at the time. Banhart was also great that night, with just him and his acoustic guitar. That summer, people that didn’t make music called it the “freak-folk movement,” but when I saw them play, I didn’t know what to call it—they just seemed like they had come from another century, another planet, maybe both.

Joanna Newsom was only five years older than me, but she seemed wiser than I’d ever be. We sat in the back of Devendra Banhart’s van while I used a micro cassette recorder to interview her. I haven’t heard the recording since I transcribed the interview in 2004, but all these years, one memory about it has stuck with me. I asked Newsom how she comes up with the stories for her lyrics, and she said something about only being able to write from her own life. This answer surprised me, since I saw her lyrics as mythological, fantastical, other-worldly. It was the first time I really thought about what it means to make art from one’s life. It’s something that has stayed with me as I write nonfiction and value the act of witnessing itself. As Newsom sings in “Bridges and Balloons,” O my love, / O it was a funny little thing / to be the ones to’ve seen.

Embedded below is the audio of my thirteen-year-old interview with Joanna Newsom, recorded on July 7, 2004. I was 17 at the time, Joanna Newsom was 22. Part of this was transcribed for a zine I made that’s hidden somewhere at my parents’ house. I had the micro cassette transferred onto a USB drive last week, and the sound quality is terrible—traffic is speeding by and I was probably too shy to stick the recorder in her face, though certain parts are more decipherable than others. This seems like a perfect metaphor for my memory of this year: so far away, I can barely hear it.

After the interview, at the twelve and a half minute mark, there’s a recording from December 2004 of my pen pal, Sean, playing “Lua” by Bright Eyes for me for the first time—a song I found so insanely beautiful at the time that I recorded it so I could listen to it on repeat until I was able to buy the CD.

After that, at the seventeen minute mark, there’s a recording of a terrible prose poem I don’t remember writing. The line “and soon I will know what it’s like to be in love,” embarrassed me when I first heard it this week. But then I realized I didn’t fall in love until 2005, so I wrote this poem imagining what it might be like.