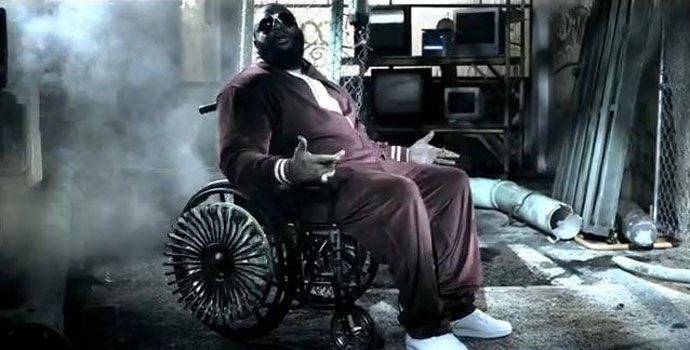 His most memorable choruses speak to his apparent work ethic: Every day I’m hustlin’. Push it to the limit. I think I’m Big Meech, Larry Hoover:

While peppered with a healthy amount of grunts, his verses are often reiterations of a familiar rap tale––in this case, precisely how he became Teflon Don. But the Rick Ross that often pops to mind is the Rick Ross who appears in the music video for Lil Wayne’s “John”––the Rick Ross who plops his Jabba the Hutt frame onto a wheelchair with spinners, who appears to have not experienced any hardship whatsoever. This is the Rick Ross that people like and remember most, as when GQ profiled Ross last year and noted his choice in food––roasted chicken with sides, fried cheese bread, artichoke dip and three slices of key lime pie, two of those to go––and the number of singles he once took to Kamal’s 21 in Atlanta––$10,000 in singles, which accumulated by three to four inches on the strip club floor. (Yes, I know these statistics by heart.)

Rick Ross is my Rachel McAdams: a highly-sought actor who’s hired to read from a well-worn script and wouldn’t dare do otherwise. For his latest single off Looking for Myself, out June 12, Usher wanted precisely that. (“It needed a boss on it,” the singer said to MTV.) So the endings presented in “Lemme See”

are, predictably, happy ones: Usher emerges victorious after he and his date get drunk off Merlot, before Ross rhymes ‘hottest’ with ‘hottest’ in reassuring us that yes, he’s still a bawse––as in, “Rozay and Usher Raymond, girl we the hottest / rocking the most ice, I said we the hottest.” But before he does, Ross jolted the song out of its club-driven ecstasy with choice words: “Had the valet parking, Chanel hoodie on / looking like Trayvon Martin / George Zimmerman, I’m wanted.”

When the Sanford, Fla. shooting made national headlines, and immediately after Geraldo Rivera advised parents of black and Latino children not to wear hoodies (“What’s the instant association? It’s those crime scene surveillance tapes“) reporters asked mainstream rappers to make their stance known, whether they’d do so with a song. Hundreds of rapped tributes to Trayvon Martin now exist on YouTube, but without star power backing them up, even those among the first had to be sought out, as they were too easy to avoid. (Full disclosure: Up until a week ago, I’d only seen one and heard of three of them.) On one hand, it’s no wonder that more than a month ago, Public Enemy’s Chuck D said that Ross, with three No. 1 albums to his name, should make a song. After all, Ross grew up in the Carol community of Miami, where much-younger rapper SpaceGhostPurrp used to see Martin walk to school.

Turned out, Chuck D may have been the only one who wanted that of Ross, of this persona who is always seen on nights out but never caught while making his money. Blogs called the verse tacky, awkward, misplaced. “Cool solidarity, bro,” Gawker wrote. ” … would have been the perfect mixture of sex, drums and R&B if Rick Ross hadn’t [sic] almost ruined it with his distracting Trayvon Martin, George Zimmerman reference,” The Urban Daily said. But Ross’ timing in this shimmering, slithering Jim Jonsin-produced track is precisely what makes this verse perfect––necessary, important. By the time Ross slips in, Usher has already alternated back and forth between slipping into his own falsetto and Merlot-induced bliss and slinging out status updates at Twitter’s pace. Skirt’s off, shirt’s off, he sings with more sleaze than the average cat-caller.

But for a brief second Ross’ verse conjures up a different image––one that he posted on Twitter, with a caption that reads, “We need justice for #TrayvonMartin Im [sic] overseas waiting on that call.” Sure, he makes sure that his ring, chain, and watch are seen, and he is indeed wearing a sweatshirt bearing his label logo. But other things are obscured: the brands, perhaps Cartier and Chanel, names he takes care to note in “Lemme See;” and his eyes, typically shielded by designer glasses, since he’s pulled his hood over his head. With that hoodie on, Ross doesn’t appear menacing, like he could hurt someone. He appears smaller, meeker, this man who usually appears larger than life in a fucking velour tracksuit. And to hear him liken himself to a 17-year-old boy who had barely grown into his 6-foot, 3-inch frame, purposefully interrupt this pop escapism to momentarily go off the script, is a necessary reminder of a sad truth: No matter how much money he could be making or what brand he’s wearing, White America may not let him escape that comparison, either.