To Live and Die (Instantly in a Car Wreck) in Texas 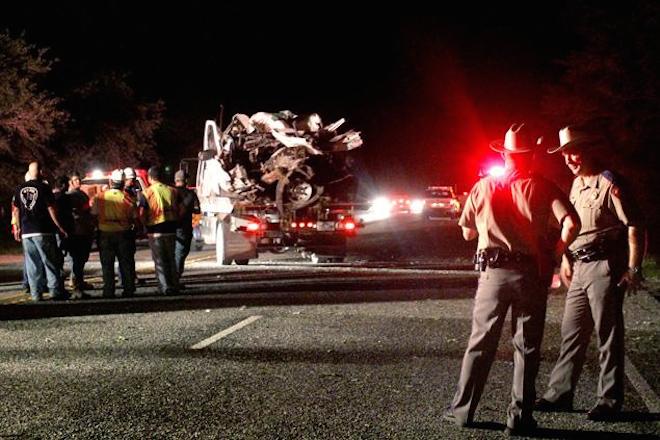 Today I survived my morning commute north from central Austin to the suburb of Round Rock for my current non-profit temp job. I made the trip back too. I didn’t get hit at all, not even rear-ended or sideswiped. I always feel relieved and somewhat surprised when I arrive somewhere safely.

According to the digital board I passed by this morning on Loop 1, 1473 motorists have died on Texas roads so far this year—that’s 11 more than yesterday. The board is the Texas Department of Transportation’s most recent attempt to terrify people into not driving like idiots. Drive Safely, the board adds, basically, Don’t die like all these other people. I tell myself it’s not as bad as it sounds, considering the size of the state. It’s like a country. Think of it as a country. One thousand, four hundred and seventy-three is such a small percentage of 29 million.

I’ve been lucky so far. In my 11 years of driving, I’ve been in zero serious accidents and only a few fender-benders. I’ve survived so many 50/50 situations, situations where I could’ve just as easily been killed, I think. I believe all my unspent bad luck has been building over the years and is leading up to one devastating impact. I’m destined to die in a car wreck. I see it every day.

Here are the possibilities that most often occur to me in my dreams:

This drunk texter isn’t a specific gender or race, but he/she is always a teenager in a jacked-up truck with a huge cattle grill ready to feast on my supple Japanese sedan. Cartoonish, almost-monster-trucks are very common in Texas, less so here in liberal Austin than in my hometown of San Antonio, but they’re still prevalent. They’re driven by the types that go to Jim’s every Sunday after church for a chicken fried steak with heavy gravy. Their hearts are ready to go off and turn their F-250s into unguided missiles a la “Macho Man” Randy Savage (R.I.P). I once drove one of these things. I like to think it was more modest and tasteful than most. It was a white Chevy Silverado with 33-inch all-terrain tires and a mere three-inch body lift. I miss how safe I felt floating above the little cars.

In my fantasies, I mean, my dreams, it is sudden and complete, though time slows enough for me to see the oblivious face of the drunk texter, smiling at a funny text or dick pic or cat pic. It’s not important. The cattle grill fills my vision and I think “Okay.” That part is really important for some reason. I have to know it’s coming. 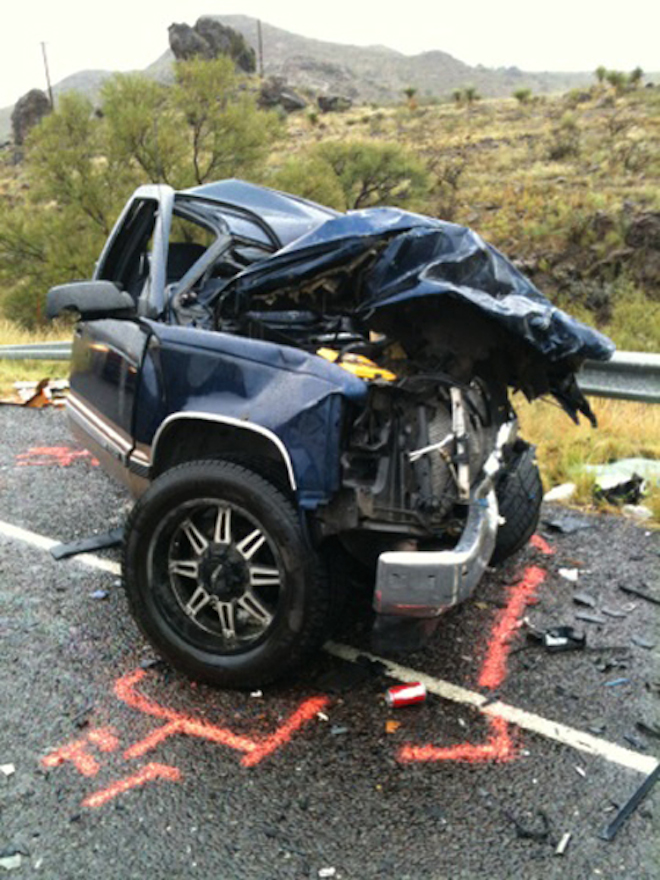 I knew of death from a young age. I knew not everyone gets old. My mom died two weeks after my second birthday (by choice, I later learned.), and my dad almost never made it out of his tiny hometown in the panhandle. He was riding in the passenger seat of his friend’s car when a girl who was at that moment taking her driver’s test hit them head on. This was before airbags, mind you. My dad’s head slammed against the dash, and he was out cold. His head would bounce from the headrest and back against the dash two more times before he slumped over. His friend saw him with his nose smashed and his bottom lip hanging on by a sliver and his teeth strewn everywhere and figured he was dead. His face was an oozing mess, but no arteries were hit and his neck held up. He survived his bad luck.

The year before I started driving, Shattered Dreams came to my school, Reagan High, located on San Antonio’s affluent northside. The ongoing program goes to different schools and simulates drunk driving fatalities and their aftermath. We were reminded again and again what a privilege it was for the program to choose us. A popular drama student “died” after a car hit him in the campus parking lot, and a mock trial was broadcast to all the classrooms, and the drunk driver was sentenced to life in prison, or something. I can’t remember.

My birthday is in April so when I started Driver’s Ed, most of my friends already had their licenses. I was excited to finally see Red Asphalt III, the much-hyped scare-tactic video on the deadly consequences of reckless driving. It is all real, my older brother and friends assured me. I understood it to be a montage of people driving into telephone poles and instantaneously bursting into bloody pulp. It didn’t quite live up to the hype, but it showed real, actual dead people. One scene in particular has stayed with me. The corpse looked peaceful like it’d already been done up by the mortician. The unknowing state trooper knelt down beside the man and gently nudged his shoulder. “You there, buddy?” Nothing. The cop pushed with more force. Of course, nothing again. The cop then lifted him slightly by his shirt, and there was a splashing sound—the sound of his brain matter falling out of the back his head.

I was a typical teenage driver, aggressive and immortal, and sometimes drunk. When there weren’t enough designated drivers in my group of friends, I would announce that I would be driving but warned everyone that I’d been drinking and would continue to drink throughout the night. Shattered Dreams and Red Asphalt did not deter me or my classmates, nor did the endless statistics about Texas’ DWI epidemic. We knew Texas led the nation in percentage of overall traffic deaths that were alcohol-related. The thing is, before Shattered Dreams came, most of us already knew someone who’d died in drunk driving accident. If the real thing didn’t deter us, how could a simulation? It seemed like every year someone wouldn’t come back from the coast after spring break. I didn’t stop though. I didn’t stop after my friend’s friend drove the wrong way down I-10, the wrong way on a fucking interstate, and killed a mother and child. The father survived. My friend’s friend survived and got life in prison.

Off the top of my head I can think of six people I knew at Reagan who’ve died since I graduated in 2005, three from my class of over 600. Take any random sample of 600 American teenagers and over nine years, a few are bound to get unlucky. They were not close friends of mine. One lived in my neighborhood and we occasionally played pick-up basketball together. I rode the bus with one during freshman year, and I shared a bong a few times with another. It was through Facebook that I found out about all but one of the deaths. I don’t plan on going to any class reunions, so likely I would’ve remained blissfully ignorant to their passing. In a way social media has made us more aware of death.

Last year Facebook tipped me off to the death of a guy I knew in college but no longer spoke to. My feed told me a bunch of mutual friends had written on his wall, and I just assumed it was his birthday, but as I scrolled through I did at a double take at one of the posts. It was something like, “I can’t believe you were in that car.” His story didn’t take much digging. I googled his name, and it was all over Austin news sites.

He was in the backseat of a two-door Honda coupe driving through downtown Austin towards I-35 where it bridges over Lady Bird Lake. Somehow thinking it was an entrance onto the highway, the driver drove under the bridge into the underneath parking area. The car hit the water at full speed and immediately began taking on water. The driver and passenger escaped, but with no door to release him, my friend was trapped in the back, and the coupe sank to the bottom of the lake with him inside. What a fucking horrible way to go. We lived in the same dorm our sophomore year, and he taught me how to play tennis. I was a beginner and he’d been playing competitively his whole life, but he took the time to break down basic techniques to me. It’s not much, but I knew him. The driver got ten days in jail plus probation.

I tend to ruminate about reckless drivers well after I encounter them, in quiet moments when I’m safe at home. I do not feel afraid while in the act of driving. If fear arises, then it is instantly converted to anger, and I ponder for a split-second whether I could get away with killing the person, but I realize it’s just no feasible—too many witnesses who’d see me and my car and take down my plate number. Next I consider following them home and killing them there. No, no, murder is a felony, and I’ll never get another non-profit temp job with a felony. I search my car for items to throw and consider trying to sling my old burned mix CDs at the car like frisbees, but by then it’s too late. They’re no longer in range, and hanging out of the window and trying to aim while driving seems dangerous.

I remember as a teenager thinking that even if I got in an awful wreck, by sheer force of will I’d somehow be able to avoid death or serious injury. I stopped drinking and driving at 19 only because I was terrified of getting a DWI after my brother and several friends got one. I can’t say exactly when my attitude shifted from cocky naivety to paranoia, but I think the fear has always been there. I realize my over-the-top bravado was a way coping with the fear, and my current fatalism is just a different method of repressing the anxiety.

My therapist always tells me that what we hate most in others is what we hate most about ourselves. We are so primed to pick it out. This would explain the road rage. I hate myself for putting others at risk. I once drove from Austin to Philadelphia in about 30 hours by taking handfuls of No Doz and slapping myself in the face. I’m so glad I never killed anyone. I now feel I am being stalked by my 16-year-old-drinking-beer-and-eating-tacos-while-driving-self. There are millions of them out there. I see them everywhere. The fatalism isn’t working. I don’t want to die yet, so don’t drink and drive, or text and drive, or put on make-up and drive because you might kill me or someone else and survive.