To Know, To Realize, To Carry a Weight 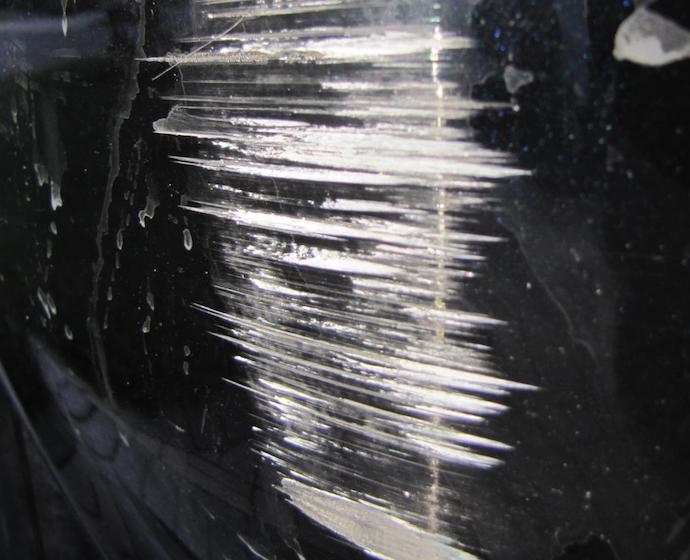 When I teach writing, I often use an example about having a bad day to illustrate a point about “show don’t tell.”

“If I tell you I’ve had a bad day,” I’ll say, “I haven’t really told you anything at all.” I’ll continue, “But if I come in here and say, ‘Oh my gosh, I woke up late because my alarm didn’t ring because my phone died because my electric got shut off because my roommate didn’t pay the electric bill, and then when I went to put on my shoes I discovered my cat had puked in them, and then—’”

I’ll ramble on, improvising bad day details until my students are laughing and nodding and mildly horrified. This, I explain, is why they have to use illustrations, examples, concrete language in their writing. They have to do more than say or name a thing. They have to show it, to make it feel vivid or real to the reader.

Of course the premise is disbelief. That naming my own experience — a bad day — isn’t enough to communicate it.

“To know,” according to the Oxford English Dictionary, means “To perceive (a thing or person) as identical with one already perceived or considered.”

“To know” something, then, is to recognize it by likeness, by its similarity to what one already knows.

I began writing this essay about six months after my dad died, suddenly, of a heart attack at 54 years old. I wrote then that sometimes I still had days when I felt exactly the way I felt right after he died. I am here now, four years later, to report that this is still true.

One day in the first week after my dad died, I was in a small grocery store, and a song my dad loved came on the overhead radio. My partner asked what kind of chips I wanted, but when he looked up I was already walking out the door to sit in the car and cry.

Some six months after my dad died, I was eating breakfast in a cafe and the music playing overhead kept making me cry again, even though the songs weren’t in any way related to my dad. I was eating in front of a large window and a man walked by outside who didn’t look very much like my dad, but did just a little, and he was wearing a gray leather jacket that looked like a jacket my dad would wear. The man was older than my dad was, would ever be, and that made me cry, too.

Last week I cried in my empty classroom at work, twice, for seemingly no reason, with no prompting, my grief’s logic becoming increasingly untethered from the visible world.

I still don’t quite know how to tell other people about this.

Ann Jurecic, in “Responding to the Pain of Others,” from her book Illness as Narrative, examines narratives of pain and the problems these narratives reveal about all writing and communication. Pain, she emphasizes, is often disbelieved. The receiver of the pain narrative, the reader or listener, often fails to understand or to empathize with the person in pain because the narrative of pain is so radically other to the listener.

A few months after my dad died, I was at a bar with a group of people I didn’t know very well, new classmates in my graduate program, when one of them asked the group when the last time we each cried was. It was a man who asked and the three men in the group began answering, admitting to crying about once per year due to accumulated stress. At that point, I cried nearly every day. And though it’s possible I could have told these people about my dad dying, possible that they could have responded gently, I didn’t have the energy to deal with the kind of flustered reaction this disclosure usually prompted. I didn’t want to have to console other people for their discomfort with me and my grief. I picked at a pile of french fries and waited for the conversation to turn.

A particular feeling comes over me when I am at a party, or even talking to one or two people, when I am presented with this choice of whether or not to talk about my dead father. It happens sometimes, too, when someone talks about fathers in general. The best way I can describe the feeling is that I go sideways. Maybe my head actually tilts. I have a lurching experience of becoming suddenly horizontal. Suddenly, I am against the ground under a heavy weight. And I feel hot all over. My throat feels thick and silence long. Time slows down, and I can feel my heart beat loud and solid and heavy.

Less than a month after my dad died, I very lightly tapped the bumper of a brand new Audi while parallel parking my car on the street outside my apartment in Philadelphia. The Audi owner happened to be standing right there, smoking a cigarette on the sidewalk. Before I had even switched off my car, he slapped my window and began yelling at me. I got out and told him I was sorry, that I’d write him a check or gladly give him my insurance information, if he could just please stop yelling. I was calm, but also near tears. He continued to yell.

After he finished taking pictures of the bumper and explaining repeatedly that this was a brand new car, that he saw me, that I hit it, he cooled off a little. He said, “Listen, I’m sorry I yelled at you — I’ve had a really bad day.”

I paused. I thought about my day, spent sorting through photos and papers at my dad’s house and then driving two hours back to Philadelphia through rush hour traffic. In the scheme of days I’d been having that spring, this one hadn’t registered as particularly “bad.”

“My dad just died a few weeks ago,” I said, “and I really want to go inside.” He went a little speechless, said, “I’m so sorry,” maybe some other things.

He charged my insurance company over a thousand dollars to repair the scratches, two or three of them, the width of dimes.

In her essay, “Pedagogy of Buddhism,” Eve Kosofsky Sedgwick writes about the difference, in Buddhist pedagogies, between knowing and realizing. She says that confronting death, the end of your life, makes that difference between what you know, intellectually, and what you realize, perhaps emotionally, more profound. Sedgwick doesn’t say this, but I think the difference has to do with what you feel in the body.

“Grief works this way too,” I write in the margins. I know my dad is dead, have grown comfortable with this factual information, but sometimes I realize it, as if for the first time, and I can’t breathe.

“Where do you feel it?” my partner asked me, one of the first nights after my dad died. I put his hand against my chest, high, almost at my collarbones.

My sister, who remained seemingly calm in the first weeks, broke out in a series of mysterious rashes. Then one night cooking dinner they had a panic attack, believed they were having a heart attack, felt sure they were about to die.

“To realize” is “To give real existence to something” or “to convert (something imagined, planned, etc.) into real existence or fact,” though it can also mean “to make seem real.” (Emphasis mine.) There is, in the word “realize,” the implication of a shadowy before, a shapeless thing achieving crystalline form.

“Concrete” language, I remind my students, is like concrete: solid, heavy, rough. It never takes long for one of them to point out that the word “brick” is not as solid as an actual brick.

I had a repeated dream of my father after he died where he would appear and we would talk or do something together, nothing special, driving around or taking a walk. But in the dream I knew he was about to die or had already died, and he didn’t know yet. I had to decide over and over again whether or not to tell him. It was years of this before I decided, in the dream, to let him know. We cried together, in the dream, and then this dream story reached its end.

My dad, I tell my therapist, was someone who knew he was going to die. He was always this way, but a few years before his death he had a medical scare, and afterwards he wrote letters to all his friends and family telling them he loved them. He hugged us all a little tighter.

He told my cousin Nina once, when our grandmother was on her deathbed, that when he was dying we could ask him anything we wanted. He would try to tell us what it was like. So we could know.

It feels to me, often, selfish to ask others to respond to my pain. It is burdensome to feel like a burden. The first, obsolete, definition of “grieve” in the OED is, it turns out, “To press heavily upon, as a weight; to burden.”

At one point I found myself listing my loved ones and ranking them, evaluating which deaths would be worst. For a moment, I consider that this could be a way to communicate my grief. Number three on my list of all the people in the world I most wanted not to die yet died. You could substitute in your number three and imagine them dying and you’ve got it. You understand my pain.

Except I know it’s not that simple. Thought and imagination are different from feeling. Even I only sometimes realize my dad died. And the pain is not in the knowing but in the realizing. The making-real.

It feels now as if I live with both the pain of grief and the memory of the pain, which itself is a kind of pain. I know, now, that I have the capacity to endure pain on a scale I had not been able to imagine before my father’s death. And I know, too, that this means there are dimensions of suffering that are beyond what my present knowledge allows me to know.

Anytime I say “I don’t know” in therapy, my therapist says, “Okay, but what if you did know?” Because I do know, often, subconsciously, what is at the end of the thought broken by the “I don’t know.”

“Not-knowing” can be a defense mechanism, she explains, can keep us from speaking something that feels unspeakable.

What I have learned from this pain, my grief, is that when it comes to others, we have to learn to say, “I don’t know,” “I don’t know what that is like,” “I cannot know your pain.”

If the goal of communicating isn’t “to know,” how else might we listen? To be in not-knowing. It seems to me like the space of intimacy, the space where even words cannot carry a weight.