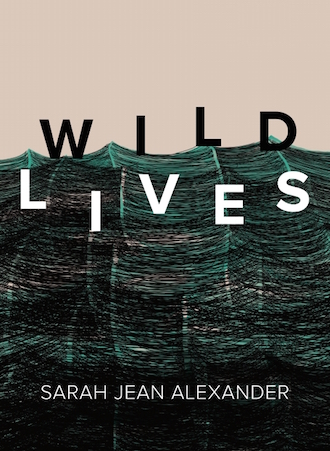 Sarah Jean Alexander’s poems are filled with miniatures. Ok, you say, not always and you are right–sometimes, though–and even when they aren’t, there is something about the poems in Alexander’s debut collection, Wildlives, that reminds me of tiny dioramas, arranged to tell different stories about their author’s ongoing negotiations with space, time, self, and others.

Alexander invites us to wander furniture outlets with her and to meet her in a restaurant in Italy to gently place silver dollars and Shiraz into her mouth.

Dynamic, chant-like language lends an incantation quality to Wildlives.  “Ahhhh” opens as the poet introduces a familiar metaphor conjuring lover as sinking ship, but immediately upturns this image with far more bizarre ones:

Tiny people on the shoreline become tinier
people still as you float out out and away, out out
and under, belly up in green water and foaming waves.

Alexander’s lines read stranger and more spellbinding as they accrue greater focus, moving further into a quasi-Lynchian dream-state that is paradoxically more vivid than the “normal” places the poems sometimes begin in. Instead of neutralizing unusual situations with specifics or bridging the gap between real and imagined worlds with comparison, Wildlives portrays a sense of distortion that accumulates, magnifies, and contradicts as more detail and information is taken on. Paradoxically, things become more and less realistic at the same time–taking on a logic of their own that is both and is neither.

Andre Bréton says that surrealism requires an absentminded, dreamlike state in which we can create or perceive art freed from our typical impulses and expectations. In closing his 1924 manifesto, he writes:

Surrealism, such as I conceive of it, asserts our complete nonconformism clearly enough so that there can be no question of translating it, at the trial of the real world, as evidence for the defense…

This summer the roses are blue; the wood is of glass. The earth, draped in its verdant cloak, makes as little impression upon me as a ghost. It is living and ceasing to live which are imaginary solutions. Existence is elsewhere.

Much like this, Wildlives exists and operates elsewhere–in its own realm, woven out of logic that is uniquely its authors–part of Alexander’s poetics requires that we enter this universe as readers, and resist cannibalizing it with the logic of ours. (It wouldn’t hurt if we tried to do this with other peoples poems always, but it seems especially crucial to appreciate this book fully.)

As the speaker is relegated further away from the other objects in “Ahhhh,” the language used to characterize the scene becomes increasingly lucid and immediate. On second read, what is happening isn’t impossible, or even odd, as the laws of physics go – when you get further away, things look smaller–this is one way reality works–yet Alexander’s tone portrays an emotional truth than is just as convincing as the physical one, and contradicts it–it feels like they shouldn’t.

In film and television, people use the term the “uncanny valley” to denote a kind of hyperrealism that gets too spookily close to verisimilitude to pass for real or fake. While this is something to avoid in TV, I am beginning to believe it is what poetry should aspire to.

While the uncanny is technically extremely similar to reality, it ceaselessly announces its unreality on stylistic or meta-narrative level at the same time. (Actor Nolan North says this is “where things look a little too real and you’re not quite sure what you’re looking at. It becomes weird like it did in The Polar Express, where the eyes seem so realistic, and yet you know it’s animated.”) I want to argue that Alexander’s poems oscillate between emotional realism and surrealistic image to obtain a similar effect–while they tend to be somewhat colloquial, and invoke familiar metaphorical vehicles like oceans and animals, their language is combined in stark and eerie ways, always turning away from the familiar when you least expect it to.

Alexander’s poems initially seem to take up the confessional tradition; the book is divided up in sections titled “The Unfair Distance That Can Exist Between Two People In A Small Human World,” “Share Your Fears With Mine,” and “Being Honest Does Not Count,” and most of the book deals with paradoxical sensations of remoteness and claustrophobia felt by a first-person speaker towards romantic partners and other people. The collection is dedicated to Keanu Reeves. Images become deeply macabre, though–far more Edward Gorey than Anne Sexton.

The first section of the book is bold and sprawling, while the second contains a cycle of short fiction pieces. Each of these rectangle-shaped prose blocks distorts a shared, domestic space at a micro-level. Though lovers are central, Alexander’s microfictions are staged more like plays, using dead & living animal characters and objects to illustrate Alexander’s tiny and bizarre imaginings, casting their human players as ever-present ghosts that loom behind them (and aren’t we? With our experiences or art always?):

We taught the small gray stones how to disassemble themselves and then we put our shirts back on and walked towards the street again. You pulled a potato sack out of your back pocket and we began scraping up every dead animal we could find flattened in the street. We collected eleven squirrels, five rabbits, two foxes, and a crow. We carried them back to our living room and watched them mix with the silver fish as thousands of tiny dead bodies continued to pour through the open windows.

These “figures” also pop up in the books first and final sections of poetry, granting Wildlives a conversation quality, between forms as well as between real and dream or metaphor and its object.

“I’m not sure why stones are compelling to me,” Sarah Jean told FANZINE. “I like that they can be tiny, or the size of mountains, they can be shiny and rare or they can be covered in mud for eons. That we can see them and use them and kick them every day and never take notice, or take so much notice that it consumes us. A jewel is just a rock. Sand is just tiny rocks mixed with minerals. It’s just another thing in this world that humans choose to ignore or flood with attention.”

The final section of the book dwells most viscerally in the everyday, containing to-do lists and poetic meditations on day-to-day rituals interrupted by longing. As anyone who has read her weather reports for Real Pants knows, Sarah Jean Alexander has a unique gift for poeticizing ordinary life at a micro-level that is relatable, yet fresh–she uses figurative language economically, but in bold, bright bursts.

Alexander’s list-poems exemplify this best, containing vivid-yet-common images of the author procrastinating online, saying goodbye to planes flying overhead, and doodling a fat puppy. The poems describe acts done idly, yet are themselves anything but idle–lines are delightfully uneven: sprawling at one moment, then shockingly cogent the next.

While Sarah Jean’s poems sometimes tap into a childlike sense of wonderment, they refuse the lazy naiveté of so many poems of these kind, which end in only the flimsy resolution that the life of the mind always wins out over the real world’s gritty logic.

Instead, they portray wonder with a refreshing, complicated maturity–though many of these poems invoke fable and storybook-structures, their narrator is always a fully human, grown woman whose imaginings do not detract from her strength or abilities to navigate the world reasonably.

Wildlives is concerned with both literal and figurative explorations of space, and which metaphors we choose to ignore or flood with attention, particularly when the two coalesce in heightened moments of intimacy between people. “The Edge-Parts of Different Places” begins with the lines “It is hard for one human / to fit inside another human”–describing a moment with a partner as a locus of both physical and emotional contradiction. As the poem goes on, its language becomes increasingly surreal, closing with the image of a Woman made out of bats.

This image depicts that creation of a kind of creepy, closely-knit darkness that provides comfort, claustrophobia, and even escape. Alexander conjures intimacy with a kind of haunting, low-grade psychic violence–I am reminded of Dorothea Lasky’s Thunderbirds at some moments. (Though Alexander’s poetics is complex, unusual and uniquely her own, I feel also compelled to bring up Tomaž Šalamun, Cassandra Gillig, and Melissa Broder–who aptly, blurbed the book.) Invocations of the surreal are echoed and answered on the next page, as the piece “Humid Air and Three Blankets” closes with its speaker uttering the phrase: “I am here to remind you / that this is happening”–a kind of choral remark that speaks to not only these pieces, but Alexander’s poetics more generally.

Though Wildlives is full of relatable, confessional poetic moments, it is not an egocentric collection: the author displaces her sensations onto dead stars, unwieldy mountains, bodies become forage, and mosquitos transported across state lines. Alexander’s announcements of amorphous longing take on refreshing physicality that isn’t amorphous at all. “The biggest stars in the universe are called red supergiants,” she announces, reflecting simply that: “I shouldn’t have let you become mine.”

Though I don’t know if there is a word for it, I want to say that Sarah Jean Alexander’s poems are the opposite form of the Whitmanesque expansive impulse–instead of making herself larger, the author manipulates language to make herself and the objects of her fascination so incredibly small they seem racked with detail–as if nothing else exists.

“I am tiny next to you,” begins the poem “695,800 kilometers.” The next moment, lovers have swapped appendages. Like my favorite of Alexander’s poems, this begins somewhere safe and lyric but quickly becomes an arrangement of tiny, eerie memento moris–a still life the author moves through, shifting seamlessly from light to solemn, play to lament, dreaming to waking, yet always herself manages to emerge intact, guiding us out in some new, direction we could never have dreamed up ourselves.