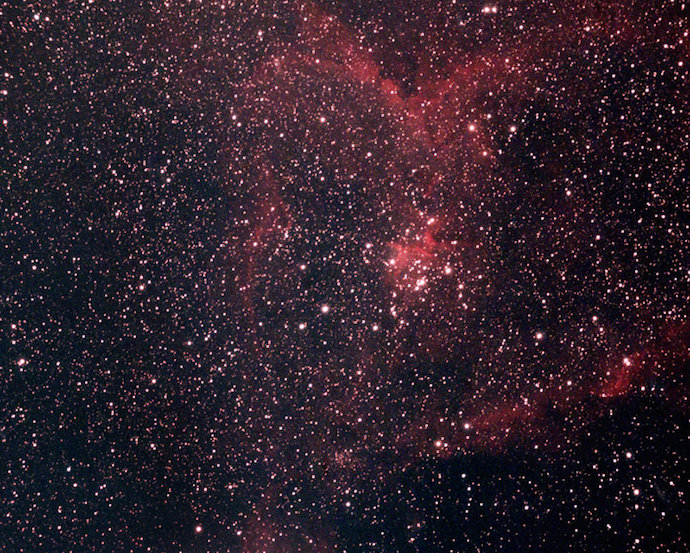 The man from NORTH COUNTRY LINEN SERVICE came again,
and the white towels fly across the arc of my screen.

Today, I swear, I looked at myself, walking down the road as I saw
two women who looked like me. One was thin and the back

of the other’s legs were fat. Two streaks lined up the back of my own.
I thought about him spinning to safety as he pulled around the truck,

jumping off the back, twisting. I miss wanting him, the way he swung
out to break the plane of my vision. I saw him in the baldness of my desire,

my leaning out into the open air, shunned. Before he backed up, he threw
one towel aside. Is that the sign I am looking for?

There’s another black in the town where I live. He wears a big red shirt.
He’s a storm down the street, breaking into pieces as he bolts forward,

His walk makes a swoosh above the bridge he makes it across.
I try to ignore the rebar that climbs through the cement.

There’s no figure in my own imagination as I run with my back,
hurling one white towel out of a room, and watching his fly from him

onto the truck bed. Why doesn’t he look in? Might he know I am split between looking?
As I watched, I thought: all that loose cotton, all that waste of my time.

How many of us have tails? When I asked him, about his, pliant bone coming
from below his seat, I realized that I’d said something about how it was steel.

Conductors float in the air, at night, above me, steel grids levitate over me, while I walk
below them. Actually, I forget the night.

I am dislocated beyond sense, my own body runs without my leaving it, over a field
that I’ve never seen before, but my legs are long and wiry.

They shock me into speed. A truck pounds against my imagination, the drum in what if
my language were so strange? What if what I said came as fast and loose from my lips?

I am not the house, nor am I the paint’s color—such white, a bluing in the morning
against the fire lit last night.

I did not awake to dawn, or a hole in the earth, one that opened up the street to the sound
of a car whisking over it:

Why do I illuminate? Here, shadows play against my fingers, but in this light
I can only imagine running from him.

50. LUCY AND THE PHENOMENA

Today, I let a fly go. The fly was slow, dumb and brown with orange stripes.
It was stupid, like the Wood-Pile, or like me, talking.

Why didn’t I stop? What made me argue so hard for the dumb, mute,
who spit on four signs behind a row of fences?

In the night hour, when I am cornered up a wall, my face glued to the edge
of nothing to say of my insecurity, a lock, the fog rips me out of sleep.

Or in the night, when I see a fat black, running near the edge of a pillar,
and leaping, the slow motion breaks matter, a ramp of speed: this is the latch.

Two big black pieces of flesh that fall down to the edge of my screen, where
it should be empty: This fog is so thick. “…an early start…” “…I’ve been at it forever…”

My eyes let in more mist, out of the deepest sleep I’ve had for so long.
I ran up a great hill, where I fell into a trance. In this body, my own force:

There are rivulets, open in me, but today I think about how I
Let the black fly in. Slowing outside my window,

there’s a car. It’s silver, and its back is clean, without blemish.
My body is pushing, with my spine opening.

In the white of my skin, dusted to the most delicate yellow,
a white flashes out across a wire that snaps out over a well,

where the spigot is pushed, still, into stone. You will find me there,
waiting with my eyes glued to where I might ask you to not trespass.

Ronaldo V. Wilson, PhD, is the author of Narrative of the Life of the Brown Boy and the White Man (University of Pittsburgh, 2008), winner of the 2007 Cave Canem Prize, Poems of the Black Object (Futurepoem Books, 2009), winner of the the Thom Gunn Award for Gay Poetry and the Asian American Literary Award in Poetry. His latest books are Farther Traveler: Poetry, Prose, Other (Counterpath Press, 2015) and Lucy 72 (1913 Press, 2016). CoFounder of the Black Took Collective, Wilson is an Associate Professor of Poetry, Fiction and Literature in the Literature Department at U. C. Santa Cruz.