This Young Monster: Seeing the Freaks Within Us 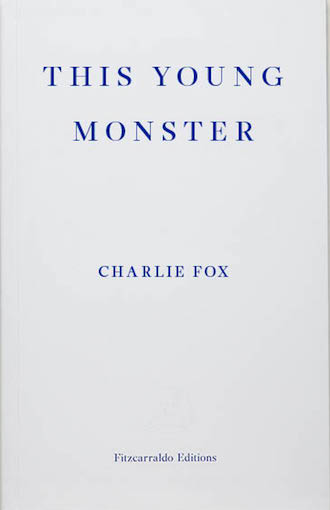 I finish reading Charlie Fox’s collection of essays, This Young Monster, put on Sleep’s Holy Mountain and turn the volume way up. I want to feel at my most monstrous as I write this to you. But that shouldn’t be hard—I am a woman, after all. And a queer.

There are all kinds of monsters in the world and Charlie Fox wants us to see them for all of their good and all of their evil, in all of their glory. As I began reading this book it felt like Fox was taking a look at monsters through positive light, which I think he is, but he doesn’t deny that some monsters are just too much, just too powerful. No matter the sort of monster there are some commonalities to be unearthed. Towards the beginning of the book, in the very first essay, a sort of autobiographical letter, Fox writes:

I’m through with thinking of the monster as a wholly negative role, which is your curse, since you live in wait a for love that will probably never arrive. Even though the origin of the word lies in the Latin ‘monere’ (‘to warn’) and plenty of monsters’ lives are cautionary tales, that doesn’t mean their transgression should be rejected.

In Charlie Fox’s hierarchy of monsters, I’m not really sure quite how far I rise. The monsters branch out, there are different groupings and dichotomies: queer, young, evil, good, beautiful, beatific. In Fox’s essays the good monsters are the queer monsters, they do not signify monolithically (Eve Kosofsky Sedgwick). The queer monsters are often monsters by birth and by choice, a clever combination of science and desire. In his essay on German filmmaker Rainer Maria Fassbinder Fox writes:

Queering the straight world is a form of revenge which proves that homosexuals can have their wicked way with modes that so often ignore their existence—Dracula comes back from the dead as a faggot!—and at the same time, all the gooey sentiments of straight life are revealed to be ridiculous. But Fassbinder’s motivations were more elaborate: he never wanted to entertain a hip subcultural crowd but forcefully occupy the consciousness of a mass audience and get right into their living room.

And that is what makes the monsters so scary to the average spectator, they come out of no where, rest invisible until the big reveal. Another favorite queer monster in this book is the performance artist Leigh Bowery. The essay about Bowery may be my favorite in the book because it treats all of the artist’s extreme creation with such tenderness; Fox points out that queerness can be both a carnival and a terrorist plot depending on your point of view, but also to survive in this world as a queer, you need to see your very own actions this way. In this balance, however, there is a certain level precariousness and Fox points this out so perfectly:

Bowery was also overcoming a gawky adolescent’s shyness so his self-invention could be called abreaction, transcendence or, um, ‘owning it’. (Who knows what sex anybody ‘owns’ if they become a combination of a prepubescent cartoon imp and bird of paradise: go ask Icarus.)

This desire for transcendence clashed tragically with the reality of Bowery’s large body, and even more still when Bowery was dying of complications from the AIDS virus.

Bowery’s body was his favorite material. There’s a fable’s wicked irony underpinning his life: no matter how fantastic the body becomes through his experiments, the same ugly fate awaits as a man is stripped down to the flesh, succumbing to disease. You can’t throw glitter on that.

This notion of glamour mixed with violence and disease is what humanity is. Today it seems to emerge most often out of the work of female artists. Fox gives long mention to Cindy Sherman but I think even more of someone like the younger artist Doreen Garner whose work takes the image society has made of women of color and reappropriates it, takes the power of so-called monstrosity back on her terms.

Monstrosity, Fox seems to be telling us, lies at the edges, close to being born and close to dying off. All children are monsters, something Fox points out and something I’ve always believed as well. The films of Larry Clark and Harmony Korine provide ample proof of this. It is the relationship between Korine and Werner Herzog, however, that really highlights the monstrosity of youth; Herzog’s monsters are fully grown versions of Korine’s adolescents, unable to cope with the world as it is presented to them by the adults in their lives. Reading this book makes me proud; I’m happy to recognize that many of us stay monsters. I wonder with unease about the people who don’t acknowledge their own monstrosity, who see themselves as clean, clear, coherent.

Fox focuses on male monstrosity which I think is decidedly different, historically and psychologically, than female monstrosity. There are a few women mentioned and interesting readings of their lives and works are presented, but female monstrosity is so much a thing unto itself with women having been burned at the stake and all that for the past millennia. In the essay “Transformer” writing in what seems like half his own voice and half Alice of Alice in Wonderland:

Sometimes I wish I was the stars. I mean, the really beguiling question my story asks is, where or even what are you when you dream?[…] When my body stretched like liquorice, a pigeon, crazy with hunger, mistook me for a serpent (‘Little girls are a kind of serpent,’ he squawked quite reasonably). Which makes you wonder what happens when a girl decides to stop being uh, girlish and become something else entirely, neither one thing nor another.

French Artist and writer Claude Cahun is one of the female monsters considered in depth in this book. Cahun stays a monster because she doesn’t concern herself with becoming a sort of full blown human woman (something that could be said of Pandora, the first woman, we well):

Not feeling human meant she could transcend all the earthly limitations. She carried galaxies in her head, hawking up the sun like the sphinx ridding herself of a pesky fur ball. She wrote of herself as Eve, a lusty broad juggling ‘suns. hedgehogs, moons, fruits, dead star’s with the whole cornucopia of creation at her command.

At the end of the book Fox reflects on what these monsters mean for our current political state. Fox calls Donald Trump a “horror-clown” and this does seem to fit just right. Donald Trump also fails to signify monolithically, changing ideas, hysterical and revengeful at every turn. This doesn’t make him queer—but it does make him a monster. It pains me to admit having anything at all in common with him, but perhaps, it can also be reassuring somehow, to “know” him a bit better. But I am hesitant to give Donald Trump the respect Fox confers on his monsters, dubious and cunning, but also loveable in their way. And as Hannah Arendt has pointed out true evil is more often born out of the banal, the normal, rather than out of the perverse joys Fox dishes out.

Donna Haraway, discussing the details of cyborg writing in “The Cyborg Manifesto,” states that new versions of traditional stories and myths should “reverse and displace the hierarchical dualisms of normalized identities.” It is the time for these queer monsters and freaks to rise and make a new world.

Part of the allure of the monster is he always kept at the edges, away from the “normal” folk:

Monsters cause trouble, they disturb definitions, they discombobulate what we think we mean. All of which is brave and wild, not to mention something like art’s task.

And this is what Charlie Fox does in this book. He takes on a trip through our cultural demons and monsters, freaks and boogey-men with clarity, precision and a sense of humor. In the essay “Spook House” Fox creates an intellectual dialogue amongst a troupe of characters including versions of Klaus Kinski, Hermione from Harry Potter and an eleven year old Michael Jackson.

KLAUS: Au contraire bae, it’s just a fact. Weird but not extraordinary for an artist to keep up that continuity between their childhood obsessions and adult work, to always be in tune with their inner devil.

Charlie Fox gives us his childhood obsessions and helps us to revisit our own through a new lens. Reading these essays I found myself highlighting not just the many films and books Fox mentions that I now want to explore but the intelligent yet lighthearted way Fox understands the burden we each face in our monstrosity:

Sometimes just having a body is gross and I wish I could escape that.