Third Space at the Birmingham Museum of Art: An Interview with Wassan Al-Khudhairi 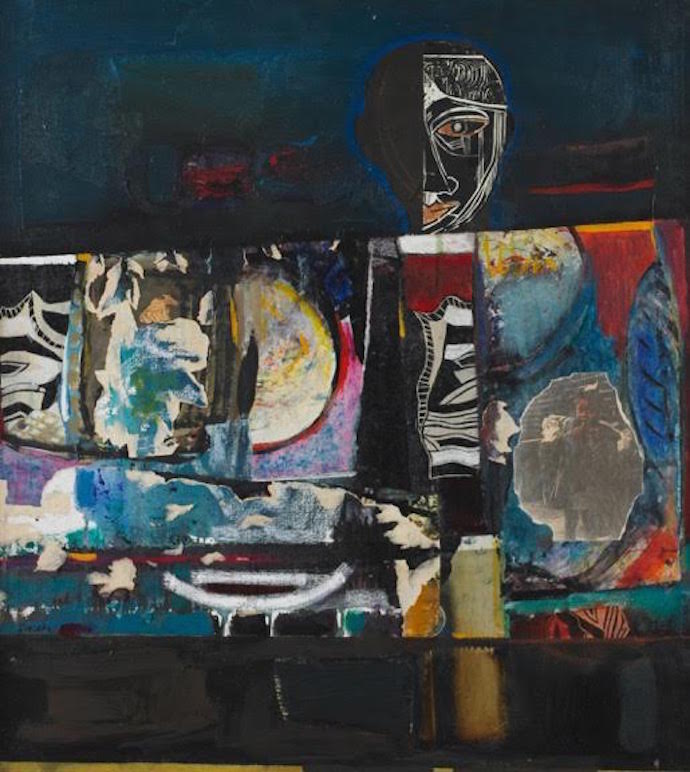 I moved to Birmingham midway through Obama’s second term and had to make a lot of practical decisions quickly, such as where to live and where to send my kids to school. I knew a bit about the city’s complicated racial history, and next to nothing about its present-day cultural milieu. Fast forward a couple of years, time spent in a kind of survival mode, learning my way around both directionally and psychologically, and one disastrous election later, democracy, which I’d spent a lifetime blithely taking for granted, has suddenly become unmoored, its future as precarious as the honeybee’s.

There’s a small grandpa voice in my head that says that art can’t solve problems. Maybe it can’t, but a culture without its arts is impossible to fathom. With arts-related funding and education on the chopping block, our participation seems newly urgent. I myself am paying a renewed sort of attention to the ways in which art shapes our understanding of the world and the ways in which the world—in all of its splendor and cruelty—shapes its artists. As an inlet to meaning, and by no virtue other than its own, art rejects authoritarianism. Art recognizes that “arriving at meaning” is a state of the spirit; it is perpetual motion; it is the anti-stasis, the death of death. When we choose art and when we serve it, we are painfully alive, and awake. Here in Birmingham, at the readings, street fairs, and cultural festivals I’ve attended, I’ve had a palpable sense of the arts’ intrinsic promise of progress: history will not be denied, history will not be repeated. If I believe that any one thing can “win,” it’s hard work—and here and now I choose to trust that the artists will always work a little bit harder than the demagogues.

The Birmingham Museum of Art is perhaps my favorite place in the city, and recently, I was thrilled to attend the long-awaited opening of Third Space, curated by Hugh Kaul Curator of Modern and Contemporary Art, Wassan Al-Khudhairi. The opening party was a true party: a lot of people—people, I sensed, who were seeking the same refuge and sustenance that I was; as well as food, drink, and Theremin soundscapes. The exhibit Third Space borrows its name from the sociolinguistic theory developed by Homi K. Bhaba, Director of the Humanities Center at Harvard. Third Space Theory proposes a challenge to our collective notion of historical identity, offering in lieu of a monolithic, homogenized representation of culture, a spectrum of hybridity and multiplicity in which every utterance holds equal sway. I was curious to see how this idea would play out in a museum context, inherently a “third” or liminal space, where individual works are beheld both as unique objects and, simultaneously, as messengers of particular epochs or styles or places. Third Space at the BMA also sought to link the American South with what Al-Khudhairi calls the “Global South”—bridging both physical and metaphorical sites of political oppression, resistance, and dissent, via diverse modes of artistic expression.

The exhibit is revelatory, joyous, polyphonic, alive. I wandered the rooms in a sort of state of electric calm, feeling how, for example, Mickalene Thomas’s “Do What Makes You Satisfied” speaks to Cindy Sherman’s “Untitled #213,” the gaze of each figure cool, collected, hardened at the edges but irrepressible. Juan Uslé’s “Zozobras en el Jardin” and David C. Driskell’s “Ghetto Wall #1” seem suffuse with the same dark secrets, each layer a broken promise. “Bridge” by Glen Kaino features six suspended identical gold-cast arms, each fist in a glove, the beauty of the metal and the elegance of the display almost but not quite concealing the hint of violence. Thematically, Third Space movingly captures life at the borders, life at the margins—the bound body, the unfettered spirit.

I reached out to Wassan Al-Khudhairi to ask some questions about the origins of the exhibition, the logistics of putting it together, and her own sense of the role it plays in its current place (Birmingham, Alabama, USA) and time (early 2017). 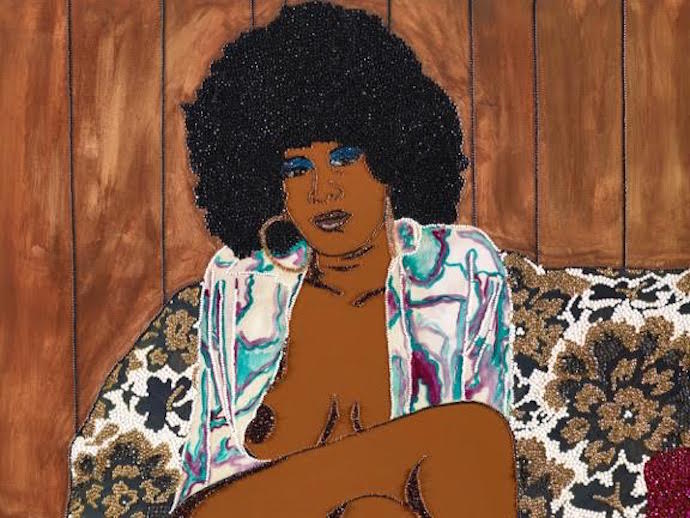 Do What Makes You Satisfied, 2006, Mickalene Thomas (American, born 1971),
rhinestones, acrylic and enamel on wood, Collection of the Art Fund, Inc. at the
Birmingham Museum of Art; Jack Drake Collection of Contemporary Art

Kristen Iskandrian: Tell me when and how the idea for Third Space first occurred to you.

Wassan Al-Khudhairi: I am interested in exploring connections and in thinking about ways our world can be so big but yet so small. As someone who has lived in small cities around the world such as Doha, Qatar or Gwangju, South Korea, I’m intrigued by how similar our human struggle can often be. I’ve always been interested in trying to find connections in unexpected places and when I moved to Birmingham I began to try to understand how the history of Alabama and the American South has had a global impact. 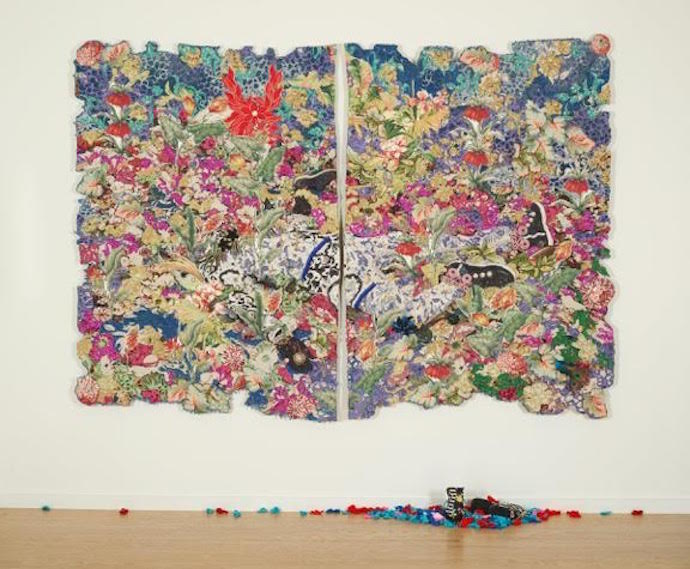 Among the weeds, plants, and peacock feathers, 2014, Ebony G. Patterson (Jamaican, active in Jamaica and United States), mixed media, Collection of the Art Fund, Inc. at the Birmingham Museum of Art; Purchase with funds provided by the Collectors Circle for Contemporary Art

Were there any obstacles you encountered as you were putting Third Space together?

Another challenge that I really enjoy is taking the conceptual ideas of the exhibition and finding ways to manifest that in the physical space. For Third Space it felt important to me that the gallery was connected to the outside world — that you can see the world beyond the museum but that you still stood in this ‘third space.’ So we knocked down a wall and replaced it with glass doors and panels and created the sense of transparency and openness that we hope will make visitors feel invited to enter the space while keeping this sense of an inside/outside space.

Do you have a favorite piece? How do you see certain works conversing with other works?

My hope is that works are in conversation with each other and that if you have seen one of the works before that it might speak to you differently in this context with these specific displays with it. There are intentional placements of works of art so that one draws connections– for example in the section exploring gaze/agency/representation, you see works unpacking ideas of beauty but also notions of visibility and invisibility through the work of Ebony Patterson and Nick Cave. On the other side of the gallery there are strong formal connections that were a lucky coincidence really— between the Rural Studio-commissioned work called 2xs and Juan Uslé’s painting. Because the Rural Studio sculpture was commissioned, I didn’t know exactly what the final form would look like, but when they were finished it was exciting to see how the lines in the sculpture are in conversation with the forms in Uslé’s painting. 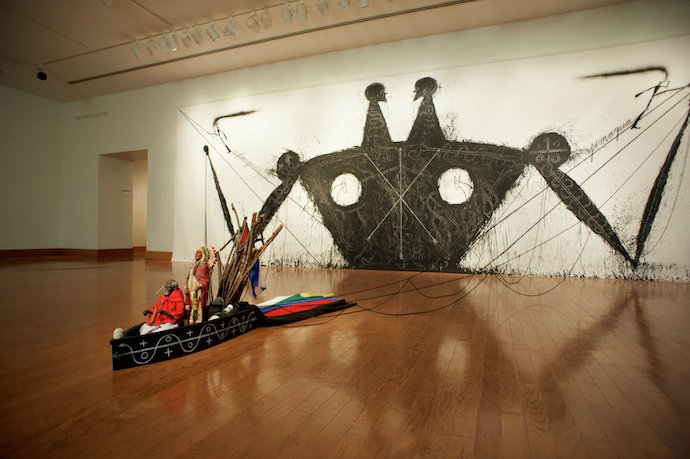 What was your overall “goal” for Third Space, and do you feel like you’re achieving it?

Overall I am hoping Third Space will be an exhibition that showcases the strength of the collection at the Birmingham Museum of Art— the ideas of the exhibition feel especially relevant in the context of national and world affairs today and I hope that the ideas and works of art in the exhibition can be an access point to talking about the past, present and future challenges and hopes that we have for our world.

What is your relationship to Birmingham? Do you think Third Space bears special relevance here?

I moved to Birmingham to join the Birmingham Museum of Art so my exploration of the city has been through the lens of my work. Last year I organized with some museum colleagues shift, a temporary satellite contemporary art space in downtown Birmingham. It was an experiment to bring creative people in town across disciplines to work on an art project together. For five months we saw crowds of people across the creative community in Birmingham convene for the monthly Friday night openings. What shift revealed to me was that there is a community for contemporary art in Birmingham— so I wanted to put an exhibition together at the museum that could engage this exact community. Thematically Birmingham is a ‘third space’–a place that, similar to other ‘third spaces’ across the Global South, can be explored through a post-colonial lens. And so the themes in the exhibition explore these similarities between Alabama as a ‘third space’ in the Global South with other souths globally. 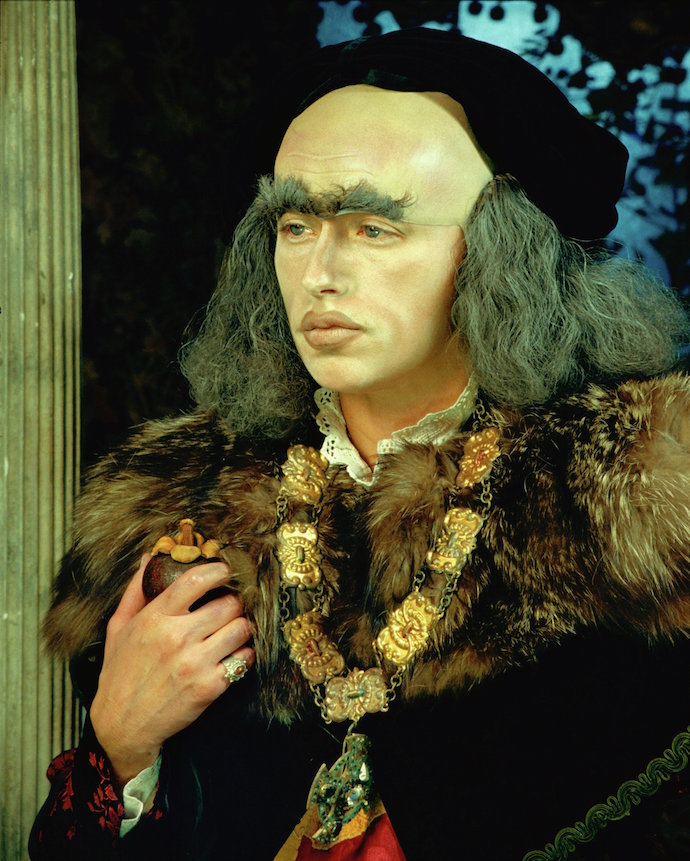 How has it been received? Do you see the works that are currently part of Third Space as fixtures, or are you aiming for more fluidity—adding, subtracting, moving things around over time?

The exhibition will be on display for 2 years and every 6-months we will be pulling in new works on paper to replace the works on paper that are currently up. The purpose behind this is two-fold: we have a limitation on how long works on paper (including photography) can be exposed to light. This is to maintain the best care for them in the long term, but it’s also a great opportunity to showcase more works from our collection and to keep the exhibition changing so there’s always something new to see in the galleries. The exhibition is free so we really hope visitors will continue to come back and see how the galleries will keep changing over the 2 year period.

So far the feedback about the exhibition has been overwhelmingly positive. We had a huge crowd at the opening and I think what is so exciting is to see that there is an interest for contemporary art in Birmingham.