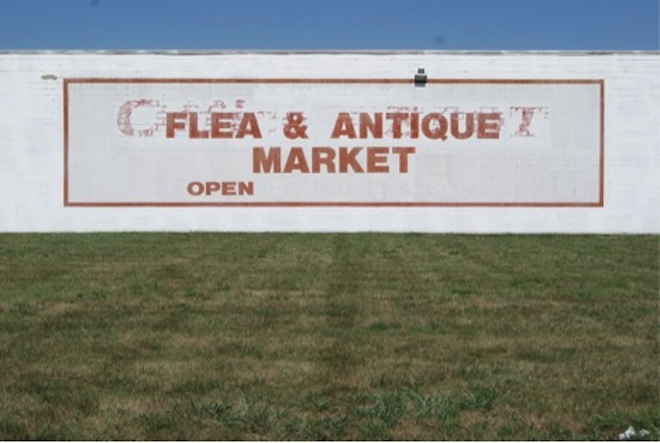 Once a year, in the brutal summer heat, thousands of freaks pile into pick-up trucks or rent U-hauls and fatten Highway 127, following the clusters of sales and encampments and shitty rural pavilions until they reach the highway’s northern or southern terminus points. You can purchase commemorative T-shirts from the local jail next to the courthouse in Jamestown, Tennessee, because why wouldn’t you. It’s often said that this particular highway was chosen in an effort to demonstrate the usefulness of America’s highway system, to make the point that it has something to offer that the Interstate system does not.

The following entries are notes I took in the states of Tennessee and Kentucky during 2012’s sale.

On a foldout, wooden table beneath a sunbaked, blue tarp, the bleached skull of an alligator. Its jaw is hinged open, showing dozens of teeth of varying size and shape. When asked how much he might let the skull go for, the vendor replies that it’s not for sale.

Standing next to the sign are two men in identical, beaten wranglers. They are doubles, their sleeves rolled to the elbow. They both wear large brass belt buckles. One man holds a miniature semi-automatic pistol—a Glock sub-compact—Marlboro burned down to the filter wedged into the corner of his leathery flap of a mouth. He repeatedly primes the Glock’s chamber, pops out the magazine, and primes the chamber. The noise is a like a rap beat. Both men speak softly to one another in a rhythm, rapping. Both men stare straight ahead, their eyes unknowable behind reflective sunglasses.

Two framed paintings of angels, their silver wings readied, postures hunched like threatened vultures. Both paintings are sun-bleached, curling at the edges. They have been left outside for too long. Big beads of moisture are caught behind the glass. I ask to take a photo of the paintings and the vendor, a middle-aged woman with spooked eyes, asks me “You a believer, too?” 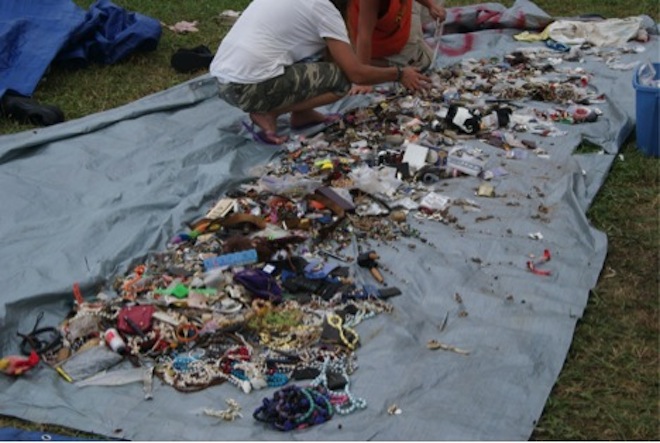 Each soldier’s jacket has been painstakingly crafted out of tiny pieces of blue and grey fabric, tiny pieces of plastic serving as gold buttons. The battlefield is divided by a river of glutted blue oil paint, the Union on one side, lined up with rifles raised to shoulders, cotton-ball puffs of smoke pluming from a the barrels of the front line, the Confederacy on the other side, charging forward, bayonets bared. The diorama itself is constructed within an antique shipping crate, its wood stained and shellacked. The detail is astounding. I can’t find a price tag.

The blade of the knife is slightly rusted, embossed with ornate German text. A tiny swastika is painted on either side of the handle, ringed with red. It comes with a carefully polished metal sheathe. I ask the vendor if the knife is authentic and he makes a noise like a bark or maybe something else. “That’s just a fantasy item” he says. “For collecting.” On the table near the knife, sits a heavy pair of black binoculars. The price tag says they are “SS Binocs” and they are priced at seventy dollars. I cannot possibly describe the weight of them in my hand.

In close proximity on the same table: porcelain head used for phrenology, a wide variety of blackface dolls and a grossly exaggerated, red-lipped, white-toothed Martin Luther King, Jr. doll. Two books, side by side, with the titles Little Black Sambo and This is Prejudice. An iron pocket-change bank shaped to look like a black man’s severed head atop a small podium. Printed on the podium: “Salted Peanut.”

From a distance, it would be easy to mistake The Nazi for an aging hippie. His long hair is pulled back in a ponytail. He has a paunch, wears tie-dyed T-shirts and Birkenstocks. I’ve studied this guy for years. He drives a pristine VW van, parked behind his vending area, chrome shining polished in the afternoon sun, though instead of deadhead and peace-sign bumper stickers, his is draped with a massive, red-and-black Nazi flag.

The Nazi is always chatting up potential buyers—typically older, white men—and making exaggerated gestures with his hands. They talk about guns, the certainty of Obama not serving a second term, and the ingenuity of German tanks (“The Panzer is a fucking rhino!”). 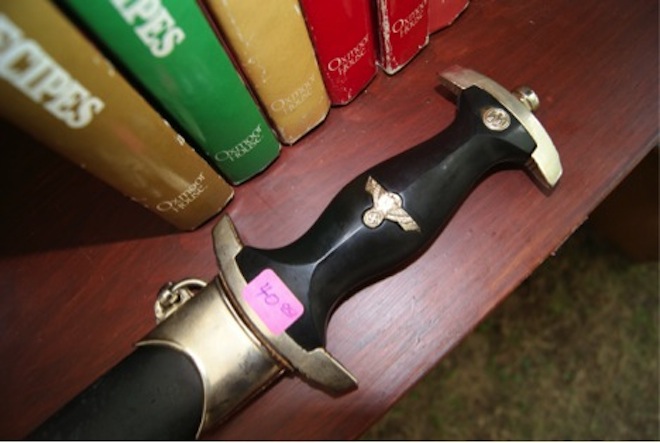 The Nazi’s table is littered with the various parts of guns, including a fully functional, vintage sub-machine gun and the giant husk of a World War II-era mounted machine gun. A dress form proudly wears the uniform of an SS officer—guaranteed authentic—which is priced at twelve-hundred dollars and includes the Nazi armband, the skull-and-crossbones pin, and the matching, patent-leather brimmed hat. I’ve seen this uniform in the exact same place every year for the past three years. Glass display cases hold nearly a hundred Nazi pins, polished to a gleam, several armbands, a folded flag and one or two ceremonial blades. I don’t bother hiding my actions while I take photos of the pins with my cellphone. There’s no point, really, because The Nazi is proud of who he is and what he’s selling.

A small, blond-haired boy with a weak chin travels with The Nazi, his son. During the day, the boy sits inside the van, its side door slid open, looking bored. I’ve studied these people. The vendors around The Nazi instruct their children not to play with the blond boy with the weak chin. No one really likes The Nazi but they’re nice to him all the same. After all, they will see him again next year.

The sales here are organized around a massive old General Store. Inside, I buy moonshine fudge. Near the checkout aisle, there is a small, antique poster for sale, sheathed in protective plastic. It shows a many-branched tree, each branch holding the portrait of a black child. At the bottom, the following text: “Black Birds.” 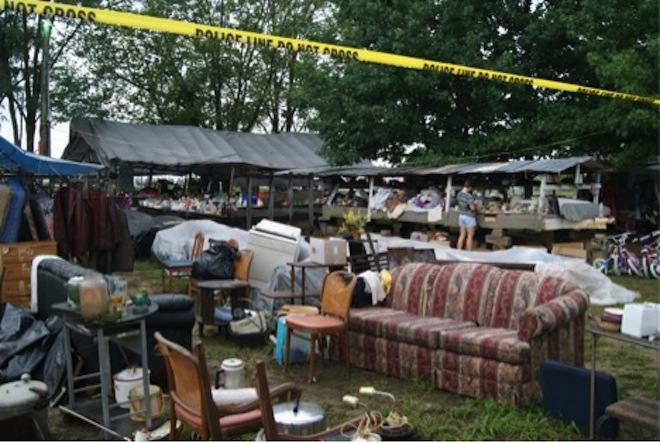 “Everyone wants a handout,” I’m told by the woman sitting next to me at the picnic table. We’ve both just purchased barbecue food from a food truck. “They’ll claim they’ve got nothing,” she says, “but they’re always talking on their cell phones, smoking their cigarettes, driving SUVs.” She’s talking about black people without mentioning black people. Lots of people around this part of country seem to speak in code, sussing out where you’re from. My accent gives me away when I tell her that where I’m from, government can often be witnessed working. “See, you’re from those political states up north,” she says, “but we’re just old-fashioned hillbillies.”

It has been raining for a full day and the sky is like the cover of a black metal album, occasionally scraping through the sound of thunder. The covered wagon trailer is about the same size as the container for an eighteen-wheeler. It sags close to the muddy ground. The wood is blistered, ashen. It’s impossible to tell if it rests here permanently or if it was towed by a truck for the sale. Huge slabs of ruffled sheet metal are propped up by planks of wood, forming a canopy above the shelving lining the wagon. These shelves hold maybe seventy or eighty porcelain, cloth and plastic dolls. Many are missing body parts or eyeballs. I find a book titled Diseases of Children. Below the wagon, stacked in the mud, are nearly a dozen resuscitation dolls, their rubber mouths gaping. 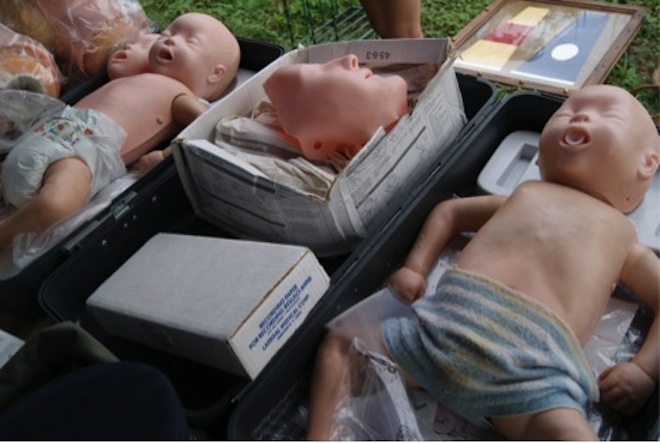 A hundred yards distant, two or three dozen wheelchairs, rusted-out and mud-chewed, their wheels sunk fast into the rain-soaked field. I take a piss on the treeline at the end of the field, marveling at the feeling of the rain like so much dust on my face. Later, when we try to leave, we find out that our car is stuck in the mud. Someone nudges us with the bumper of their car and then we are back on 127, heading home. 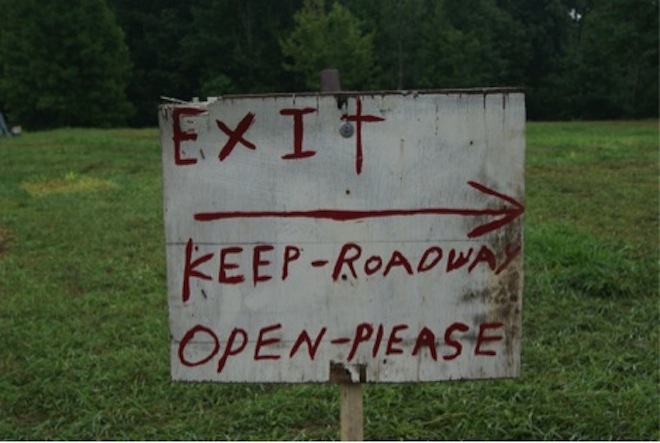