The Struggle Is Real: Morgan Parker’s Other People’s Comfort Keeps Me Up at Night 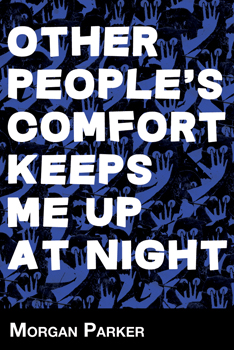 In Other People’s Comfort Keeps Me Up at Night, Morgan Parker looks America in the eye and doesn’t blink or run away. Instead, she keeps coming at it with an unrelenting fierceness that is at turns funny, biting, and heartbreaking. Selected by Eileen Myles for Switchback Books’ 2013 Gatewood Prize, Parker’s debut pulls no punches as it delivers poem after poem of smart, insightful criticism of our current age, where the American dream is no more and the struggle is real for so many as we live in, and attempt to push back against, our patriarchal, racist, capitalist society.

Drawing on reality tv shows, music, and life experience, Parker creates sharp poems that explore the every day in concise, straight-forward language. There’s evidence of a New York School influence, especially in poems like “I Was Trotting Along and Suddenly,” which echoes (and cleverly updates) Frank O’Hara: “I’m at parties acting perfectly a fool.” However, these poems move beyond that into something fresh, delivering an urgency and realness that feels necessary right now. Parker is New York School meets BreakBeat, which Kevin Coval describes as “poems readable, listenable, relatable, and unfuckwitable,” in his introduction to The BreakBeat Poets: New American Poetry in the Age of Hip-Hop. It’s a poetry that is “alive and relatable, a language of the working: all the horror and hope and humanity.” And Other People’s Comfort treats the reader to precisely that: poetry that is alive and full of horror, hope, and humanity.

From the very opening poem in the collection, “There Are Other Things I Want to Explain but They Are Mysteries,” Parker comes out strong and delivers poetry that teems with life, effectively using enjambment and a lack of punctuation to create lines that rush forth to its conclusion that hits like a brick wall, temporarily stunning the reader:

What is usually said about love I ignore

in our throats what you don’t know is

I envy this world and want to save it

saying this will sting but only for a minute

our primary concern will always be

to wonder how many serial killers have entered

like nipples what I really want to ask is

what do you think of the idea of progress

and is it an injury I can fix

Throughout the collection there are a number of poems that share this effect of stopping the reader dead in his or her tracks with the final line, such as “Hot Serpent in the City,” whose cascading lines end suddenly with the declaration, “you don’t give a damn.”

The speakers throughout the collection are streetwise and tough, prefer Timberlake to Plath, and find inspiration from Gwendolyn Brooks, Curtis Mayfield, and Jay-Z. In “Boys, Boys, Boys,” the speaker declares:

can make a sister crazy so I settle

for free shit: Trade you digits for dinner

I can make a mixtape my own 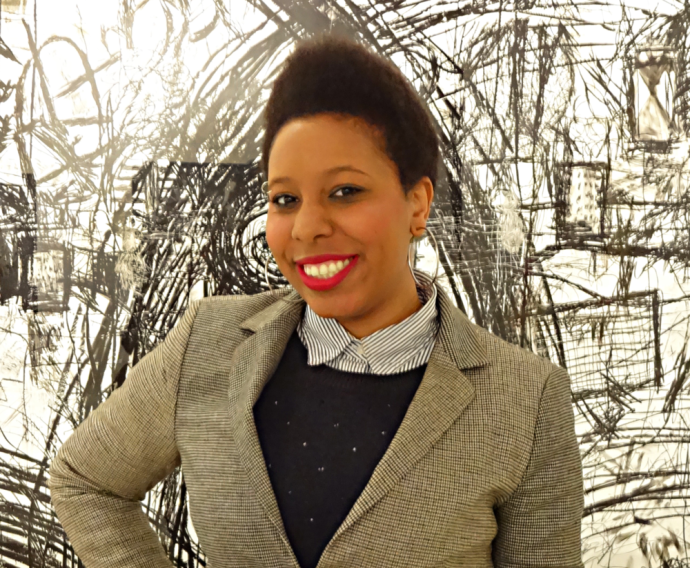 Alongside this toughness, there is a vulnerability too. The voice that emerges throughout the collection is smart, complex, and one of someone who knows heartbreak, who carries pain, and who sometimes uses toughness as a mask in order to get through the day, but that doesn’t mean the toughness isn’t real too. In “Everything Is Bothering Me,” Parker writes:

All my friends say baby

wake up and go to work

I can do it forever

She knows the bad feelings—the reason to stay home from work—don’t disappear in a day, and so she goes on, as we must if we want to survive. We must always go on. In another stanza of the poem, the priorities of a capitalist society are questioned as the notion of “being present” is turned on its head:

So I can be more present

I am getting e-mails on my phone

there are other places

we have ruled them out

The pain the speaker experiences is existential, captures a modern day loneliness, and is grounded in generations of white supremacy. In “Epistolary Poem For Reader, Brother, Grandmother, Men (or, When I Say I Want To Spit You Up),” Parker writes, “Maybe if I knew my grandmother / and the white family she worked for, / I would feel different / about everything around me.” Later in the same poem:

The past has not been as rewarding

as I had hoped.

I spit it up

In a strong series of poems called “Miss Black America,” Parker offers her own spin on the Curtis Mayfield classic, asking what this hypothetical woman is like and how will she be seen by others (“Do the white boys back it up / Are their mothers terrified”). The poems effectively employ anaphora, asking again and again “does she”: “Does she grind slow / on back-when harmonies”; “Does she got that good hair / from her mama’s side // Does she let her / white friends touch”; “Does she wish for world peace / equality  or has she given up // On the platform     is she for sale”; “For her crown does she get / 40 acres.” Of course, this woman isn’t hypothetical, nor is it a single woman.

Alongside these sharp critiques, there are also humorous moments throughout the collection including a poem called “I’d Rather Sink…Than Call Brad For Help!” in which the speaker insists, “Brad if you’re / out there I am / doing just fine.” Parker’s reality TV poems also offer humor while simultaneously providing criticism. Through her examination of their tropes and characters, she turns the cameras back on the audience, calling attention to the performative nature of so-called reality and the viewers’ own complicity in it. In a fake audition tape for The Real World, the speaker says, “The viewers want me / at a three-drink minimum.” And later, she promises, “Give me a drink and I will do a service.” In “Real Housewife Considers Feminist Theory While Sketching Designs for Her Handbag Line,” the speaker concludes, “Women / are a problem with a name” and “Power is money and my body glistens.”

Other People’s Comfort Keeps Me Up at Night is a powerful debut collection from a promising new and necessary voice. Parker’s collection is hyper-contemporary, drawing on what it means to be alive today when our phones autocorrect our texts and we’ve given into a kind of living that prioritizes work, money, and power over justice, equality, and happiness. But as Coval notes in The BreakBeat Poets, “[W]e, this country and culture, are at a breaking point.” And it is writers like Parker who will help lead the way, through both bearing witness to this life and calling it to our attention, shaking us awake from the mind-numbing drudgery many have slipped into.