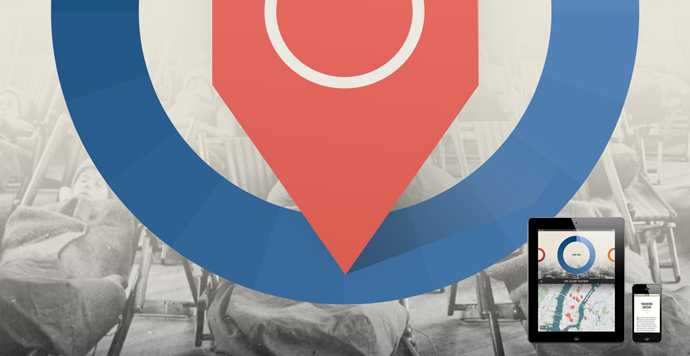 There’s a new app for Apple’s iPad and iPhone platforms, one that houses a sci-fi serialized novel called The Silent History. You should download it immediately.* Catch up. We’re like a week and a half into this saga.

It’s an exciting project. Writers Matthew Derby and Kevin Moffett and editor Eli Horowitz gel together like Holland-Dozier-Holland. The testimonial structure reminds me of Faulkner’s As I Lay Dying, but I can see it unfurling into a survival-horror-game trajectory.

The fourth part of this equation is Russell Quinn. He provides the technical prowess. Readers aren’t merely enticed by piecemeal mystery but can add their own field reports. With the GPS on an idevice you can find these field reports on a digital map. If you happen to be within a few feet of where the report was developed, you can read it.

I see pilgrimage road trips in the future. I corresponded with Eli Horowitz, longtime publisher at McSweeney’s about a few things. He’s always seemed to me a maestro a bit like Terminator X (i.e. he speaks with his hands). He’s cool and direct, but not silent.

FZ: I ran into you at The Master premiere at the Castro. I sat in the back row with Richard Parks and he had a flask and we started drinking every time Joaquin Phoenix would, so I don’t remember much of it. Can you tell me what happened?

EH: I stayed completely sober and still I don’t think I could tell you what happened.

FZ: A few weeks later (a couple of days prior to the launch) I get an email from you about the launch of The Silent History. You said Richard had been shooting video for some of the promo stuff and I was like “AHA! Everything is coming together.” Speaking of which, how did this all come together? When did you move on from McSweeney’s editor to founding this company? Did the idea for the app come first?

EH: I had been phasing myself out at McSweeney’s for a year already when this idea starting growing on me.  The intention of the phase-out, I guess, was to create space for ideas and projects like this (in the broadest sense) to emerge.

FZ: We met at Valencia Street not too long after you had taken over the reins as managing editor at McSweeney’s. I volunteered as an intern while at Berkeley J-School (I may have been the oldest McSweeney’s intern ever) and y’all were working on that huge Vollmann book, Rising Up and Rising Down. I kind of think back on that as sort of the ultimate editing test. I mean in a sense… we weren’t really allowed to edit that first version down, but just getting it all formatted and clean copy was quite a feat of organization.

EH: Yeah, I remember being confused by what this grownup was doing there. (You were probably all of… 27?)  Rising Up and Rising Down was… I mean, it was an overwhelming project, and I was vastly under-qualified, but there’s a value to encountering a project like that before you’re really ready.  If you can get through it, nothing afterwards will seem too big or too sprawling.

FZ: On The Silent History, how have you divvied the work up, the four of you?

EH: I did the initial conceptualizing and outlining, and then Matt Derby and Kevin Moffett put delicious meat on those brittle bones, and then Russell Quinn programmed it up.  The collaboration was a lot of fun, and really vital to this project––each aspect of the project informed all the others, so it really helped that the workflow was so fluid and trusting.  All those guys were absolutely central.

FZ: I saw that you smashed your flip phone. Have you finally gotten an iPhone? Please tell me you at least have an iPad. If not Apple should send you one, eh?

EH: Yeah, it busted in half two days before the launch.  I did indeed get an iPhone.  I’m still kind of conflicted about the whole thing.

FZ: I’m excited about the interaction with readers and how they can contribute to the story by creating field reports. I saw Facebook friend Ken Baumann was the first to submit post launch. Cool. There are testimonials from Atlanta and Decatur near where I live. These fractals of connectivity I assume will keep growing.

EH: I hope so.  It’s really hard to predict.  But Baumann’s was a really encouraging start.

FZ: I think that this serialization via tablet/phone method is the perfect delivery system. People are busy. A testimony-a-day you look forward to, can read at breakfast or on the commute, and of course if you buy the whole month it’s a deal. Novels were once published this way. Dickens, anyone? Do you hope one day people will be discussing an unfolding novel over the water cooler like they do popular TV shows?

EH: I do think that serialization can help encourage that kind of shared experience.  It also spurred us to write in a different way, to be very conscious of pacing and plot and structure, which was interesting.  It’s not ideal for all novels, but for this one it seemed like a worthwhile experiment.

FZ: Will your new company Ying Horowitz and Quinn be solely focused on these kinds of projects, that is post-print?

EH: We’re definitely not post-print.  To the extent we have a focus, we’re interested in projects that consider form and content and design and let them all respond to each other.  For The Silent History, the form happens to be digital. For Lucky Peach, the form is a semi-glossy magazine. For upcoming projects, I hope they’ll somehow integrate both.

FZ: Oh right Lucky Peach, I dig that magazine. Everything where I live is peaches––streets anyway. You did an issue for McSweeney’s that was a kind of national scavenger hunt. Here you have testimonials from all over the world. What’s up with Antarctica? Are you in touch with Plato’s Atlanteans?

EH: You mean The Clock Without a Face?  Yeah, I did that with Mac Barnett and Scott Teplin. The Silent History is kind of that project turned inside out.  They both emerge from similar senses of possibility.

FZ: That reminds me there’s that Google map dilemma on iPhone. Does the new iPhone have a good map of Antarctica? I guess you’ll be coming to Android soon too?

EH: Fortunately, we used MapBox, a third-party map provider, so that let us dodge that whole mess––and also allowed for prettier maps.

FZ: If you don’t have a kid, the idea of having one is often terrifying. Then if you do have a baby you suddenly have all these new fears. I went through this with my son. He didn’t talk until he was two. Had some staring spells when he was six months old. Went to neurologist and everything is fine. Growing up my sister had a near-drowning experience, suffered brain damage and couldn’t talk afterwards. So the fear of this is really palpable. More and more kids have Autism, ADHD, people blame vaccines, plastics. All kinds of things. Parents have a lot to worry about.

EH: I don’t have children, but both Matt and Kevin do, and I know they tapped into that experience.  Even when there’s nothing specific that’s wrong, nothing medical, there’s always this mystery, this distance, right?  I mean, that’s true of all people, but especially children, and especially your own, I’d imagine––you’re so close and still you sort of have no idea what’s going on in there. We were trying to push that tension to its limit and see what happened.

FZ: There’s also been a kind of revisionist look at hyper-parenting. The Dr. Sears attachment types. Author Paula Bomer has written a relieved take that stands up for the parent as individual. In Ben Marcus’ latest novel The Flame Alphabet the parents are suffering from a disease caused by the voices of their children. Some of the characters in The Silent History are quickly seeing the kids as a serious problem.

EH: We tried to give each character a different position in relation to the kids.  There’s hyper-parenting, yes, but also absentee parenting, profiteering, suspicion, glorification… People use the kids as a screen upon which to project their own fears, I guess.

FZ: Just saw Looper too, where people are developing telekinetic abilities in the future. Have you seen that? There’s a pretty scary kid there too. But seems all he needed was love.

FZ: Nah… I guess we’ll see what happens as we read along. Looking forward to the daily dispatches.

For more on The Silent History and to download go to http://www.thesilenthistory.com.

*If you have those platforms. The Android version should be coming soon.