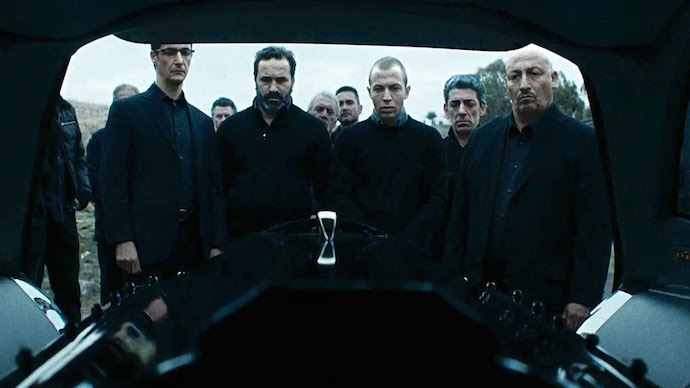 In her 1980 review of film critic Pauline Kael’s collection, When the Lights Go Down, Renalta Adler names “physical violence depicted in explicit detail” as one of the “four things she [Kael] likes.” Surely, then, the late Kael would feel comfortable watching the 2008 movie Gomorrah, publicized by stills of two teens popping off automatic weapons in marshlands, dressed down to tighty-whities.

Lost in translation from screen to advertisement is the naivety and impetuousness of the pair as they shout quotes from Scarface to each other; their story one of the movie’s five set against the universal cycle once sanctioned by both mono and polytheism: that of the blood feud. It is here where the only strings between this and Francesco Munzi’s Black Souls are tied in a loose sailors knot.

Though Black Souls, has been marketed as both a modern gangster film and “genre mashup,” violence receives little screen time. Instead the focus is, among other things, on family dynamics and the larger questions of physical and moral strategy in war in a rapidly changing world.

In many ways, this reminds me of the story of St. Rita of Cascia, patron saint of the impossible in the Roman Catholic Church, who lived at the turn of the 15th century near Umbria. Following her husband’s renouncement of the vendetta and his subsequent death at the hands of allies, the grieving widow prayed until both sons grew sick and died of dysentery before they could avenge their father. The traditional oration prayer to her begins:

“Weary and discouraged as I am, I feel the very prayers dying on my lips. Must I thus despair in this crisis of my life?”

Black Souls opens to goat herder Luciano (Fabrizio Ferracane) at peace among his flock, observing a delicateness in nature as he rubs salve on a neighbor’s doe. Meanwhile, Luciano’s teenage son Leo, has convinced  a friend to drive as he shoots out the window of a local bar in retaliation for an insult to the family. This simple act of petty revenge propels the plot, touching anyone related to the family, but mainly the boy’s uncles Rocco (Peppino Mazzotta) and recently returned Luigi (Marco Leonardi from Like Water for Chocolate).

In a nod to the drug connection between Calabria and Spain, Luigi is first seen buying large quantities of pippotto to cut and flip, the initial sale made on a luxury boat. While Luigi works to electronically transfer the family’s funds for the product, before the pair later steals calves from a farmhouse, Rocco, in a moment of foreshadowing, asks his brother, “We’re over 40 and still doing this kind of bullshit?” Absent at the feast is Luciano, whose retreat in conscientious objection turns to indecision. For a film that wears its tropes of time and family on its sleeve, it’s no wonder that when one sibling is murdered–behind the village church no less–the plot accelerates and the tone shifts from sullenness to rage, a similar device used in American director Jeff Nichols’s brilliant debut, Shotgun Stories.

In Munzi’s version of the town of Africo, branded by police and journalists alike as home to the Calabrian ‘Ndrangheta, the viewer is constantly reminded, sometimes with shots of the mountains and burning newspaper clippings–that indeed the time is out of joint. Fortunately, Munzi seems to know his ax is dull, and has the wisdom and faith to counter with the unseen and unspoken. Offscreen characters and inherent key plot points give the movie its disconcerting edge; one of which is “Barreca” the never-shown-and-whispered-in-name enemy of the family who has become increasingly powerful during Luciano’s dormancy.

The initial temptation in viewing Black Souls, particularly from an outsider’s perspective, is to ask whether the film is a commentary on Italy as a whole. In an opening scene, we watch 50 euro bills flipping through a counter, followed later by calves being led to slaughter in the trunk of a Mercedes Benz, as one brother looks on clothed in a suit, the other in jeans. When the men of the family gather, Leo mentions Garibaldi during a dinner conversation only to be rebuked, “What does a donkey kid like you know about Garibaldi?”

This interpretation easily extends to the women of the family, as Rocco’s northern wife Valerai–Barbora Bobulova perfectly cast as an ambiguous ethnic other–keeps an arm’s length from her in-laws and her husband’s business, while he himself alleviates his own personal involvement by handling the “cleaner” business end.

As the eldest of the trio, Luciano is dragged out of his seclusion into the present, forced to confront a reality onscreen full of questions posed by both its characters and the audience. When confronted about the irrationality of his son, an older man asks him, “You’re the older brother and you still don’t know anything?”

While the film leaves itself open to historical and ahistorical analyses as this, upon further examination, Munzi creates a paradox of reaching beyond the provincial even as the family remains in or returns to Africo like moths to a flame.

It’s not uncommon for American studios to clean up on domestic losses for blockbusters by releasing them overseas. But for Vitagraph to distribute a film even more narrow in audience than Todd Solondz’s Dark Horse (2011), their previous project, would be akin to roasting the stolen calf over a pile of burning euros.

Instead, the film shows the universalities we want to escape from with a voyeurism similar to that commonly portrayed in American blockbusters and popular gangster films. Impulsive youth like Leo, the new generation of ‘Ndrangheta seen snorting cocaine off his mother’s cutting board, are akin to characters like O-Dog in the Hughes brothers Menace II Society, a fictional simulacrum of the Grape Street Crips.

Like these characters, Munzi’s are caught between reality and a world of the mind, negotiating earthly justice and that of higher orders. Neither modernity nor novenas said in vain can change the fact that men and women, at their hearts, remain the same. From the congruity of a seemingly futile vendetta in present-day to the agility in which an age old story is retold, Munzi’s ax does not fall under the weight of its head –but rather splits its log in one heavy motion.