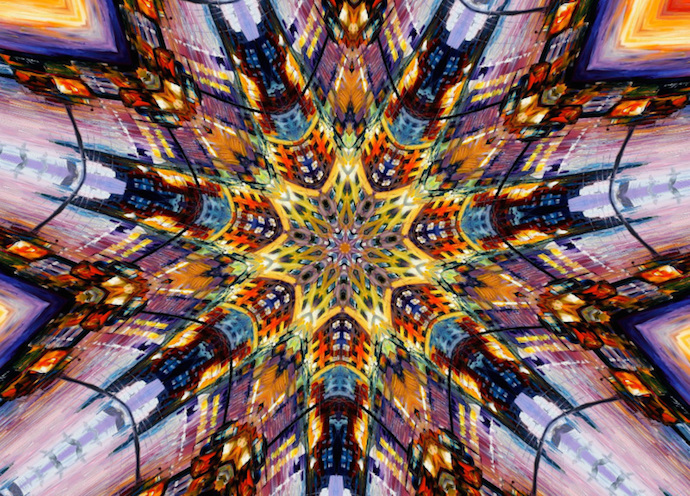 Gazing at himself. Nothing. Nude. Naked in the mirror but nothing. No one knows. No hat or penis. No briefcase floating in the air. A VHS tape levitates off the table in the corner, floats to the middle of the room above a chair, then is thrust down forcefully upon its edge, cracking open like a broken egg. Its film is extracted, the empty husk of the cassette tossed onto the floor. Slowly he winds it. Slowly. Then the crown of the head. Forehead. Face—its muted contours—materializes. He continues like this: smashing tape cassettes, bringing his body into place. The best he could do with such little notice.

Static of Something Frying

You left the eggs on again.

Pressing on Your Eyelids with Eyes Closed

To be frank, I don’t even remember in the slightest what a kaleidoscope looks like. But I can imagine it well. Jagged colored edges mirrored, heft in twain. Something poetic about its plasticity, or how it looks plastic. Or crumpled tinfoil. Aluminum insides bouncing off of plastic. Better to stare into the sun then close your eyes quickly. A convex mirror: the iris. Without it, what then?

His wings like static left the eggs on again in hopes of perching upon something rotten, or rotting, or an item to puke on at the very least. Staying stationary above a frying pan, his sound mixes with the popping grease while the man adjacent to us has a heart attack, reaches for his telephone but freezes mid motion, awkwardly holding his arm in the air. The noise remains, but it’s much more pronounced now and we wonder, is this something that could possibly happen on a daily basis. We can hear, arpeggiating through it all, the struggling little gasps for air, as if made by an out-of-breath chipmunk.

Something is constructed but we’re unsure of what. Much like corners in a dream. Hastily put together. Shapes. Lines. Unclear angles (if they can be that way). A looming matter of construction. Before us but somehow somewhere else. Everywhere we place our hands, the spackling just seems too thick, too much to ever be able to get away with in any sharp sense of reality. It is a house; we are made to enter it.

Bungalow with Carport Being Attacked by Other Homes

It is a house; we are made to enter it even as it is being devoured by other homes. Suburban architecture subtly masquerading as the creeping vines which line its walkways. Wisteria. Carport: gone. Ivy. Windows: gone. The car out front: gone. Sinking backwards. If it had another floor, perhaps things would be different, but the bungalow is peeking from behind the curtains of Time. Our old neighbor, Ted, used to have BBQs on his roof just because he could. He’s dead now. So are we.

Falling into the Sea

It suddenly falls into the sea. Us. We. The bungalow. Time. And everything else. Sounding with one sharp snap. We look for sand dollars while the Bungalow pretends to be a jellyfish, but it can’t float—it never could—so it fashions its sensible, red-brick chimney into a periscope, lobbing night tables at whoever comes too close. We built the house on a precipice with the intention of it someday falling into the sea. We built it to watch it edge slowly off the cliff each year, like an old couple in Cape Cod: timing our mistakes to the faithful wash of a lighthouse in the distance, the body of which can never be seen through the fog. Every year we inched a little more until here we are. O’Neil would be proud, or perhaps devastated. If he’d’ve pushed himself a little further, the stage would have flooded.

Sometimes it’s like opening your eyes under water, but it looks like the surface of it for some reason. It’s like opening your eyes under water to stare at the surface of the water: the way the light’s reflected in ripples, dancing from one area to the next like heat lightning skipping around in the sky. It’s not dangerous but the power remains. Like falling into a Jello mold, which tends to remind one of children or the infirm. Looking down into an indoor pool at the elderly. Or being wheeled through memory, such sanitizing thoughts bubble to the surface.

Cleanliness to what? Some believe they’re owed staying clean until the very end, perhaps others think they own a tidy death to those they loved. Needle in the dark and a shot in the ass.

Flip a nurse on her back and watch the monitor go from bright green to red to off the charts. In the exercise pool no one’s allowed in. The orderlies shrink back when the jets turn on; it provides a soothing lullaby for the dementia patients: they’re imagining blowing bubbles in chocolate milk, farting underwater.

The orderlies watch the chloronic spume gather and reflect their eyes under water. Thousands of them, like a fly. Or maggots before they’re born. Age is death and death is endless, like the surface of it, for some reason.

each one a maestro, a batton, a thing to wield. these are not fingers, are they fingers?

When one self leaves the other slowly follows, like a spirit shadow

like slicing yourself into perfect segments; which is the true self, the one the leads or the one that follows? Or splitting yourself into three segments, or four, like an exploded skull. And if we could only explode in such a way the world would be better off for it. When our spirit shadow tears itself away from the flesh, from memory and synapses, guiding us toward our primal issues.

Without the body the mind is free to face its problems head on; work out the best solution without a worry of tearing away some part of itself. Meeting things head on without a head, later hitching a ride out on a moonbeam.

Visiting every locale from high above in the air, with the scale of others—of buildings and people and place and landmarks—seriously diminished.

Birds fly south for the winter because they’ve grown so tired of industry, it’s been that way for centuries but the labcoats keep getting it wrong.

The sharper the pen knife is the easier it will be to penetrate the skull, which is where we’re going.

Inside the skull is a greyish mass of cauliflower where our styles are kept, which we need to train to combat atrophy. It can be eaten to sponge up its powers, or the powers of another. Used in rituals as well, the cauliflower is an important staple in curried dishes the world over.

Some people have brains, others the cauliflower.

I was talking about brains at one point but shifted focus.

With a pen knife, you can slice quite properly something altogether new if executed perfectly; can combine the skin / varying attributes into a bodily film. It is the latest and greatest form of special effects; the director poured all of his sweat and blood into it, that kinda thing, you know?

Those higher up in the film industry have always been cutthroats, so why not work with what you got?

Put together the best of everything you can find and craft a masterpiece.

With so much lightning there’s little use for lamps nowadays

In our home, there’s so much lightning there’s little use for lamps nowadays. It’s true they can come in handy for decorating purposes, but not much else. Plus then there’s always the danger of leaving one on for days when we go under—it’s a fire hazard Danny says—so we prefer to operate by the light of the moon and the electric sky. Uncle Bob drives golf balls off the roof of the bungalow each night to tempt fate. He will soon be struck dead, there’s no doubt about it, but he’s vigilant. If only he’d tried as hard to keep his first marriage together he’d likely have a larger spot on the couch. We frequent the yard playing games. Although everyone’s an adult, it’s summertime, so it’s OK to let loose now and then. We frequent the yard playing tag and are only allow to move each time the lighting lights up the sky. It can often go on for hours without a champion. All the while, uncle Bob screams four from the roof of the carport, and Maisy’s inside somewhere crying or trying to understand if she should stay or leave. She could leave and never come back for all I care.

Much of the lines (piping, walls, etc) seemed to have remained mostly intact, despite all the ideas being blown away.

Have you ever built a building out of toothpicks? It’s like that, but bigger, and much more costly.

The Invisible man returns dressed in drag, donning a tight-fitting dress with a VHS tape design that accentuates his hourglass physique.

Floaters change into strands of genetic mutations or evidence

On the beach, alone, white sand surrounding me. I was attacked by what I thought was a fly. Every where my head turned, it seemed to recede into the periphery before I could get a clear look. I continued this exercise fruitlessly for what seemed like days. Eventually I plopped down on the ground and gave up. Then I saw them there in front of me, like tiny little spots, or what you might see through a microscope before adjusting the magnification. They’ve stayed with me ever since.

Lighting under the stairs to cast ample shadows onto the wall: a person, walking up, then down, then up again, nonstop. Walls made from balsa wood crack and break easily, but can be easily repaired as well, so it’s just the same. What we want to focus on here is the pain and anxiety Cornell portrays by washing the dishes of the kitchen white. When the Mothman spies on people he sees two sets of curtains and 40 of the same person, all in an instant.

Daniel Beauregard is a writer living in Buenos Aires. His work has appeared in a number of places, both in print and online. His novella The Mother of Flowers, was named as a finalist in Civil Coping Mechanism Press’ recent Mainline competition. He has previously published two chapbooks of poetry, HELLO MY MEAT and Before You Were Born. He’s also a co-founder of OOMPH!, a small journal devoted to the publication of poetry and prose in translation. He can be reached @666ICECREAM.