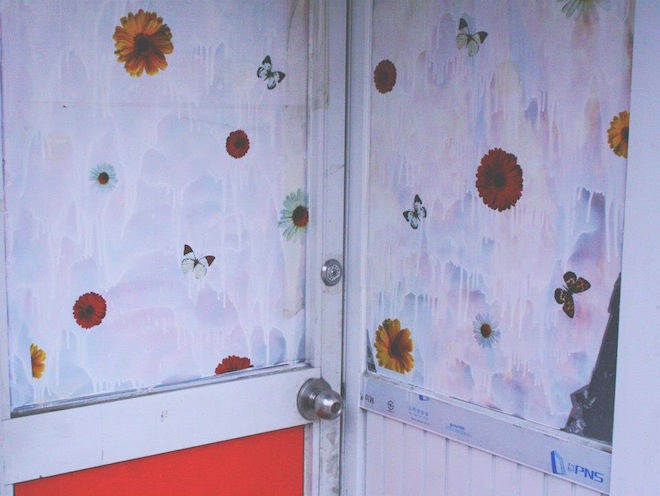 The first time the disease came to her, it was a particularly humid summer. Everyone was perpetually drenched in cold hose water, holding ice in their mouths. She and her siblings slept on thin bamboo sheets, rough and cool, underneath mosquito nets which showed up as sails in their dreams, transporting them to ice caverns. On particularly hot days, they jumped into ponds and came out covered in fat leeches, leaving contusions on the legs. But then forgetting, they’d jump in again, as if in a purifying ritual, a self-baptism, and emerge blessed by tiny succubae. In their delirium they did strange things, chewed on bark and pine resin, ground unknown inedible berries and smeared the juice on their brown arms. The hot smell of flowers was everywhere and it made them want to devour everything. They gathered fruit and came home with only a handful, drunk with sugar, stung by jealous bees. They dove for conch lurking with the occasional hermit crabs and small fish, and ate the chopped flesh. In the evening they harvested the remaining vegetables untouched by the vindictive neighborhood dogs; their hands became fragrant with wild garlic, and then with mint. This is how they lived, automatic with madness, forgetting easily.

That was the summer of ecological bloom. The oak trees thickened with yellow caterpillars. They dripped off the trees. The ground splattered with yellow mush, which dried into stains. All layered over by chewed on oak leaves, bitten green over bitten green. That the caterpillars were numerous had something to do with their dying, despite having few natural enemies. That summer they seemed to eat and maybe eat themselves. When they were there, life without them was no longer seeable. When they were gone, spaces in the trees seemed strangely without. No butterflies ever came to replace them. And the spaces they left behind were sticky. It opened and shut differently now, you got used to how everything moved with extra weight on it. Later the wind did as it used to but her eyes adjusted for the difference, put those gooey bodies back there.

One afternoon, she ran out after a sunshower, to catch the last of the cool before it evaporated. Her father held out his hand and tried to hand her a maemi, like a handshake. She sensed the vibrating thing, the buzz and hard wings hitting his skin. Instantly she could see all the other maemi on the island, their constant allover presence. They could all fit in his hand, or they weren’t there yet but seemed to be waiting their turn, a mahogany and terrible presence. Like a thousand pieces of his soul which might as well be her soul, were thundering in hidden places, demanding that she take responsibility for them. That every single one of them had a pair of eyes occurred to her with a shiver, that all of them might be recording her movements and taking note of her speech, or even wordlessness, aware of what made her wordless and what caused her to speak. She ran, triggering a patch of dragonflies into the sun, while the crawling hornets in the sand ignored her. She was aware of how much information they were gaining then, of what may have caused her to run, where and how she ran, zigzagging to a spot in between trees, cool with moss and free for a moment.

But once you learn the word, it stays anyway, and often I woke up thinking: now a buzzing science in my mouth.

The same hands were once dyed with bongseonhwa: bright orange fingernails pressed tight with the mash of petals and leaves. So I know he was once a boy. Always a boy running near the hills of yellow gaenari, of late spring, fingers still dyed with the bongseonhwa of early spring.

Later I would learn words like forsythia which did nothing to describe the country hills dotted like toasted pollen with gaenari. The dancing gaenari. And later I learned the common name for bongseonhwa was touch-me-not.

Later I would have the bongseonhwa pressed on my fingers, sometimes just the pinkie drenched orange. We used plastic cling wrap and tightly wrapped scotch tape, not the leaves themselves, to cover the crushed innards of flower dye, cutting off circulation of the blood.

In that drunk summer, dripping with caterpillars, and drones of the maemi, a militarized debauchery of insects, her body already covered in the blood seeking punctures of mosquitoes and leeches, she entered the ocean one day and came out with the beads upon her skin. At first hardly noticeable: no dull pain, no itching, and no burning rash sensation, no drip nor pus, no real hot influx of feeling. It was a dreamy time, and the dreaming coincided with trips to the water. She hardly registered this new phenomenon, this barely physical thing, up against all that gooey.

Illness has a shadow activity around its head a murky dancing; the motion, which gives it shape through time. Hers was spreading, so the counter move was immersion.

The feeling wasn’t so different from all the other times she was pulled from the beach to wade suddenly into the cool water. When her belly slid on rock laced with barnacle, wet skin drying into traces of ashy bomb tests. But that had been a lifetime ago. When the beach was that place away from life, of delirious rest. Where everyone was always more hungry, eating seaweed which shone like a blackened geode, lodes of green and metal. And lost in hypnotic activity, until suddenly the red horizon drops and it’s incredibly dark. All of a sudden.

The sunset is what they tell you to watch for, but the moment she felt it in her body, that magnetic sinking, was at the onset of dusk. All of sudden. When the water looks mercurial, and black underneath. A shadow of itself. When the shadows of things she thought were fish, gliding close to her legs, were now the entire water.

She entered into the water now thinking something like–

“I was hoping to forget, to be overwhelmed by summer before the approach of dark”

The ocean was a cryogenic room, a place for hovering near death, close to this kind of overwhelming. A place that was cold finally. And within the ocean, so many specialized rooms, when she came to lose sensation of her own body, the rooms came into focus:

switched on a lamp and wondered if the light was visible    from the outside like    the echo off a thick vein    a sky colored curtain        the light was all wrong: you knew it from another place  a fragment of a bad day now mostly forgotten      a warm curb a palm sway     a jasmine thicket fence    a crumbling ruin     being patched    falling again     patched again

Once out of the water, the architecture of rooms disappeared, but then language returns, and she seemed to wake up, there was a mass of buildings, sort of crumbling. This was a kind of dreaming, to pretend that language hadn’t happened and that there was no separation from it.

Language becomes ripe in the ear, after a while, it falls of the tree. Ripe means it’s close to rotting, reeking of perfume. Language was like throwing up at night, with other people, just to be together. When her eyes were closed there were arcs of fruit, making their way off the mouth. When her eyes were opened she proceeded like all that wasn’t happening. But it wasn’t easy to retch.

Soaked and still numb from the water, she stuck her hand into the clay of the cliffs, and tried to make it stick there. Failing that, she stuck the quahog shells and the abalone shells up, in the shapes that she wanted. And the marks, the disease, also wove around her skin, in the shapes that it wanted. It was not only spreading, it was her language to speak.

Oki Sogumi was born in Seoul, Korea and currently resides in Philadelphia. She is the author of The Island of Natural History (forthcoming from Publication Studio), and a chapbook, Salt Wedge. Her poetry has been included in HiZero (UK), LIES Journal, 11×11, and appears in little boxes on the internet sometimes.