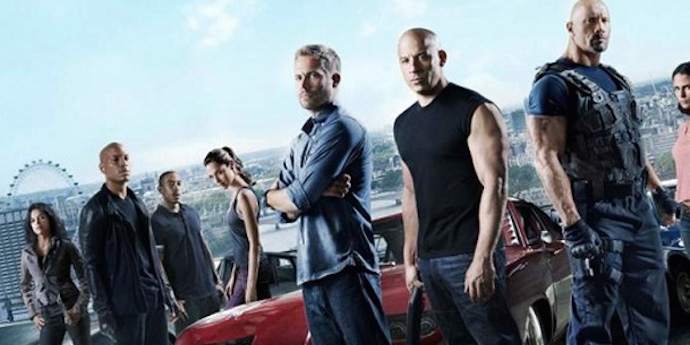 When news of Paul Walker’s death spread on November 30th, 2013, in the middle of filming, the first collectively asked question was: “Are they going to finish Furious 7?” Followed by: “How are they going to finish?” If life is a highway, then Hollywood has been making billboards to sell us “South of the Border” souvenirs and the occasional jar of Burma Shave since before the Public Works Administration. But the first question on my mind was whether the death of Paul Walker would affect the film’s reception, an extra star and a half given by the toughest critics out of pity or their own fear of mortality. Lucky for me I didn’t read any reviews. Lucky for you, the franchise’s latest installment lives up to its last three (yes, there were six before).

Even as The Fast & the Furious has become Universal Pictures’ highest grossing franchise of all-time at currently over the $3 billion mark, the films have gotten better with time because as a whole it has gained self-awareness, wearing its heart on its sleeve, playing up to its strengths while downplaying the weaknesses: making mistakes appear as if they were placed there purposely as a well-trained painter would, Vin Diesel giving a smile, wink and nod to the audience. In today’s internet culture, we see the chattering classes priding themselves on loving both “high” and “low” culture all the while maintaining the dichotomy between the two, even when mixing them, opting to pay the extra cost of the vinaigrette for their kale salad instead of the free ranch dressing on the table all the time waxing philosophical on movies that are meant to simply be enjoyed.

While an amateur cinephile could see the ominous car approaching the gang at a funeral as director James Wan’s referencing Abel Ferrara’s King of New York, the answer to why the film lives up to its hype lies in the details. Inside the simple video game level structure and shock and awe scenarios–that indeed continue to surprise–are the subtle choices that set the film apart and prevent it from being a checklist of action tropes. A bus falling off the edge of a cliff doesn’t have to explode when it smashes into rocks. We don’t necessarily need Lil Jon’s words from the chorus “Turn Down for What” playing as the men walk down stairs in a wardrobe change. The music sans vocals works just as well. These and other choices give it that handcut cookie feel instead of a perfect geometric shape, which is laudatory considering the somewhat predictable casting additions of friends and foes.

Unlike previous sequels, Furious 7 opens with no grand sequence but instead digs immediately into the plot. While Dominic Toretto (Vin Diesel) and company now live free from legal repercussions thanks to former foe-turned friend Diplomatic Service Security agent Hobbs (Dwayne Johnson), the threat of retribution rears its ugly head in the form of Deckard Shaw (Jason Statham in his grim and ashen comfort zone) older brother to Owen from the previous sequel, now comatose after being thrown from a plane. After multiple attempts on the lives of the Furious Family and the elimination of Han–sufficiently cutting ties from the atrocious Tokyo Drift sequel–a game of chicken between our hero and our Hamlet plays to conclusion, Shaw’s capture hindered by the arrival of covert ops leader Frank Petty, played by none other than Kurt Russell. Without the slightest hint of irony or moral ambiguity, the crew become mercenaries for Petty, hired to recover a flash drive from another mercenary in exchange for finding Shaw.

When I watched Fast & Furious 6, I thought of cars on the interstate on their way to destinations–family get-togethers, jobs, vacations–only to be interrupted by a tank and convoy of muscle cars, collateral damage caught up in carnage having nothing to do with them, the fates of passengers inside crushed compact cars and SUV’s unknown and passed by at 120 miles per hour. Suffice to say, the death of Paul Walker mid-film did not prevent any of this from happening again in the film this time around, cars flying into buildings as tall as the Towers, most likely smashing into desks and at the very least a few maintenance worker’s carts. Because while Walker died in a Porsche that might as well have been named “Little Bastard Jr.,” the man who directed the Saw movies reminds us once again to not only count your blessings, but that once you’re gone, those left behind must forge ahead. Because as the men and women of color and different origin fight on screen, there we are in our seats watching the camera literally rolling with bodies winding back and forth, striking each other in semblance of baseball batters in play, reminding us of the giant possibilities of the human spirit.  Or realistically, reminding us that nothing pumps vicarious adrenaline into our veins than watching individuals beating the Christ out of each other.

One of the final scenes reveals a fork in the road, a clumsy slip that definitely deflated the balloon a bit, leaving me to wonder which turn the franchise as an organism would make. While fine acting has never been the franchise’s forte, when the stunts become too outlandish, the dialogue too wooden, it’s time to say good night, Gracie. The question now remains whether Toretto, Hobbs, Letty, Roman, Tej, and Lucas will live onscreen as long as George Burns.