The Disordered Mind of Yours Truly 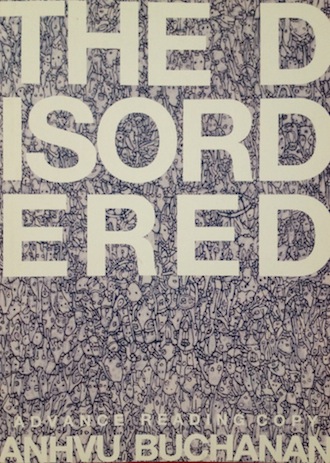 The DSM-5’s first major rival for page-flipping and self-diagnosis has arrived: Anhvu Buchanan’s The Disordered. Eliminating the judgmental tone of the DSM series, what with their collapse of the Autism spectrum and advising antipsychotics for two-year-olds and cannabis addiction––what is this world coming to anyway if babies can’t misbehave?––we delve with pleasure into the actualized(! Maslow would be proud) disordered mind. Like cracking open the first Psych 1 textbook in high school and pleasurably ascribing psychoses to our nearest and dearest, and––with the thrill of terror––to ourselves.

Read excerpts from The Disordered on Fanzine here. Read my disorders as follow1:

p.19 “How Eyes Acquire Their Dreams”

The ceiling breathing down like parachute silk made from pale elephants. Someone kept pointing out the crocodile in the Keys, I saw him, I saw him, even after I stopped seeing him I still saw him, didn’t I (Klänge).

The train goes through the center but people will look at you as if sight were made from far too many small hands, the goo ones from the 50¢ machine because we are eight and have watery reflections, pond scum, and baggy socks.

Removing the body from bed reeks of defeat; dreams cluster around the earholes still muttering the premade drawers in the lumber of trees, the first layer of meat as it dries and flakes away, there are maps with no locations only locales.

A cocoon or coffin of bubblewrap for protection from anxiety & the people who appear & dismember you at night, then stuff loose body parts into old tires which may then be hung on dead limbs of pine trees in the forest.

I think I am an 80s era housewife, all nylon nighties & tasteful wood paneling. The mink may be fake. Oftener these days middle-aged women think I am embarrassed by my presumed Jewishness. Someone showed me an eyewitness sketch of an alien. My response: something about Nazis in the ice or at the flea market. Something about the types of wall that may be built and how they may be misconstrued or made of coral. Houses, for instance. Red or blond hair, for example.

__________
The Disordered is available from sunnyoutside press.

1 Titles and page numbers taken from The Disordered, all text my response to the book.