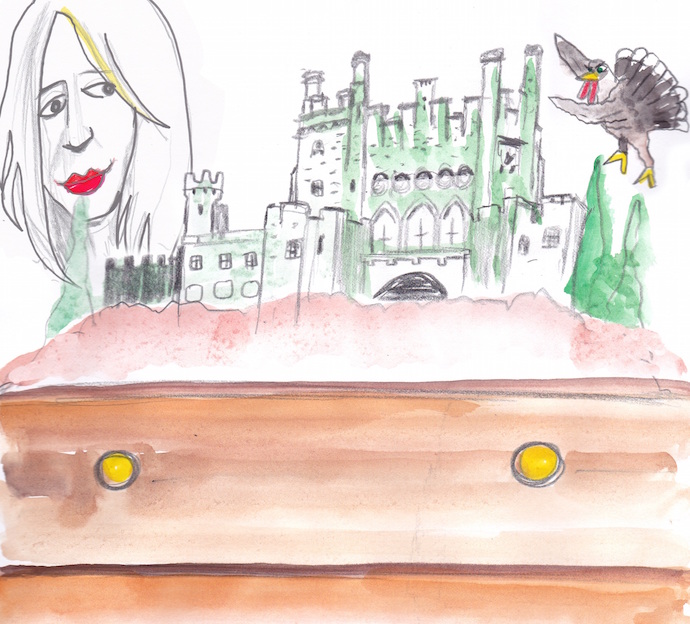 1. This afternoon, my son and I went to go visit my mother at the school where she works. She worked there while I went to school there, as a kid, and I got into a lot of trouble, which was awkward, because the people I got into trouble with were all her friends and co-workers. As we were talking, a man came over to ask her a question. I recognized him as one of the deans from my senior year of high school, at the height of my badness. I was really, really bad. I pushed a teacher once, and hung the man in effigy in the hallway. Seeing him now, twenty years later, I had to say something, so I apologized. “Don’t worry about it,” he said. “I thought you were….” “Troubled?” I answered for him. “Yes,” he said. “But I also thought you were funny. I remember this one time, I told you that you looked nice, do you remember what you said to me in response?” I shook my head. “Pervert!” he said. “You called me a pervert! I thought that was funny.”

2. At age eleven I have a boyfriend. We are in the same homeroom class, and have daily journals that the teacher makes us keep, but does not read. Every morning, I come into school early with my mother, who works at the school, and while no one else is there, slip his journal out of his desk, and read it. He writes nice things about me that make me feel warm. Eventually, I go to his house, and we swim in his family’s pool. I wear a purple bathing suit with a large grey tiger on the front. The next day at school, my male classmates won’t stop laughing. They say that I am pregnant, that my boyfriend put sperm in the pool. I turn to my boyfriend, expecting him to say something in our defense, but he puts his head down, and looks away.

3. My mom’s big dream when I was a kid was to buy this medieval castle in Ireland and turn it into a bed and breakfast. The castle was on the market for a long time, and she kept the real estate listing for it in a dresser drawer in her bedroom. She hoped to get other people in our family to chip in towards buying it, and they could all run it together, but no one was interested. I would see the picture of the castle whenever I went into her dresser to look for change, or a pair of socks. The dream in the drawer.

4. My dad grew up in Dublin in the 1930s. He came from a family with not a lot of money and the cliché of apples for Christmas applied. He had to drop out of school to work which made him insecure and on guard to prove his intellect. He hated The Brits. The Brits. “The Brits” is a slur I heard all the time growing up. I still hear it at family gatherings, where there is drinking. My father joined the IRA. He was proud of this. He spent time in jail. I think he wished he spent more time there. When he was in his twenties, he moved to New York. There is a black and white picture of my father in Dublin with his first wife right before they left: He is wearing a belted trench coat, and his hair is shiny with pomade. He stands on a street corner, his arms wrapped around his attractive young wife. Promise. They both look high on promise.

5. My father had a strange sense of humor. When were bad, “The Turkey Man” was coming to get us. The Turkey Man was a winged, white meat monstrosity who flew through windows—a Thanksgiving Day Moloch whose favorite meal was cheeky kids. Another common threat of my father’s was punishment by internment at “Rosemary Hall.” Rosemary Hall, we were told, was a jail for children, run by sinister nuns, who enjoyed torturing young people in a sadistic frenzy. Rosemary Hall exists. It is a real place. It’s a posh boarding school, a part of Choate. In actuality, my father was threatening us with was a first class education— probably the thing he most wanted for himself.

6. I have a memory of being in my parent’s room, standing between them on their bed, as they slept. In the memory, I am naked. I must be about seven or eight. There is a Mass card stuck into the mirror in front of me, the mirror that in the memory, I am admiring my naked body in. I decide to commit the prayer on the card to memory, to add it to the prayers that I say every night before bed. I imagine my mother will be very impressed when she hears me recite this new prayer at bedtime that I have learned of my own volition. The prayer on the card is the Serenity Prayer. Though there are things about this memory that I question, I never had to learn the Serenity Prayer once I began my decade in and out of drug treatment. I always knew it, always had it memorized. How did I learn it then?

7. Packing up the car with my mother and siblings: spending the night, or a few nights at my grandparent’s, or my uncle’s. The mad rush to get out the door before he returned from wherever he’d been drinking, it felt exciting, like an adventure. Pack—fast! Grab the dog—find the dog, where’s the dog? Once, we forgot something: maybe it was an ID, or the name of a lawyer, or a homework assignment, and we had to go back. We passed him stumbling down the street. I watched him out the car window—we were racing him back to the house. We were racing dad! Running from my father meant we would be going to the park, so my mother and uncle could talk at the picnic tables. It meant we were going to be eating at Wendy’s. It meant Happy Meals from McDonalds. Running from my dad meant fun.

8. Something sort of quietly beautiful happened yesterday. My grandmother is 93 years old, and starting to get sick. Really, she is more depressed than anything, and at her age, it goes without saying, her body is tired. We were talking, her in her chair, her throne, and me close by on the couch. Her hearing is not good, and she won’t wear her hearing aid. “How come you don’t mention any men lately?” she asked me, not really seriously, more jovial. “Lately, I just don’t care,” I answered, truthfully. “But you know what, Gram? I’ve been thinking that I could really love a woman.” I said it like I was kidding, though I wasn’t. And my grandmother said, and I could tell that she really meant it, “Well, there were plenty of times I felt that way, too.”

9. I visit my grandmother a few times a week. Today, I went to see her with my mother and my son. “I have to tell you something,” she said to me, a few minutes into our visit. “But I don’t want you to get resentful.” “What, Great Nana?” I said. I call her “Great Nana” when I’m with my son, because that’s what he calls her. “On Sunday, your lipstick was too bright,” she said. “Too bright?” I repeated. “You usually do it so well. Like right now, it looks nice. But on Sunday, your lipstick was much too bright.” I looked over at my mom, who shrugged her shoulders. “Are you saying I looked like a hussy, Great Nana?” I asked. “I don’t want you to get upset….” she said, twisting the end of the blanket she was sitting on. “And you let me leave your house like that, in my too bright lipstick, looking like a hussy?” “I didn’t know what to say!” she said. On the ride home, I envisioned my grandmother seeing my too bright lips like beacons of light, hussy lighthouses calling out to lost crotches in the night.

10. We were talking about the essay I wrote about my son’s father’s death, and how, whenever he checked himself into treatment, he’d always dress to look his best. And we were talking about how, unless you come from money, by the time you’re willing to check yourself in somewhere, there’s usually not much wiggle room around it: you look as ruined as you feel. We talked nothing about why he always made the effort. And we talked about how I haven’t been in treatment since 2004, but by that time I’d tried it close to 20 different times, and there was always someone there with me who had that red and black parka that you used to be able to get for free by redeeming Marlboro Miles.

Fiona Helmsley is a writer of creative non-fiction and poetry. Her writing can be found in various anthologies like Ladyland and The Best Sex Writing of the Year and online at websites like The Weeklings, The Hairpin, PANK, and The Rumpus. Her book of essays and stories, My Body Would be the Kindest of Strangers, is forthcoming this year.