Swimming in Starlight: A Review of Hannah Lillith Assadi’s Sonora 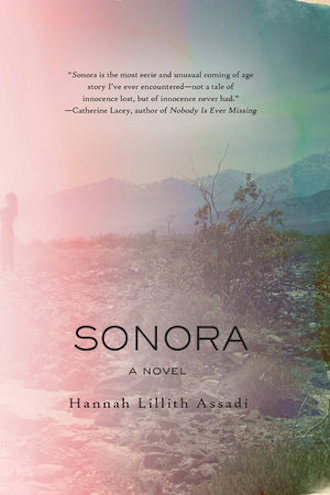 “A taste for the desert is a taste for ultimates, and death is the backdrop against which all we know comes to brilliance. When a dead cactus remains on its feet, stripped to its rented skeleton, it leaves a shape as refined as a sculpture…A dead cholla tells us nothing of what’s ahead for us, any more than the death of a close friend: all it reveals is process…But it brings to consciousness our complicity in a mystery that becomes, even as we reject it, our own.”

– Bruce Berger, The Telling Distance: Conversations with the American Desert

Deserts seem to be the least mysterious of all landscapes—what could possibly be hiding in that vast, sandy analog?—but wander into one and you’ll find its secrets. Animals hide in plain sight: triggered by footfall, dusty lizards run across your path, stone-still birds erupt into sudden flight. Light and sound travel differently in the arid heat, and the senses are altered. You might hear a low, unbroken hum or get the feeling you’re being watched. There’s a new awareness of the self—the extreme environment is an invitation to examine the edges of the body, the mind. Maybe this is why the desert is notoriously appealing to loners and misfits, seekers of all kinds. You are the creature you’ll find hiding out there.

The Arizona desert is the haunting center of Sonora, Hannah Lillith Assadi’s mesmerizing debut novel. As crucial as any character, this setting is a surreal canvas upon which Assadi projects the intensity of youth. Plagued since childhood by visions and fever dreams, narrator Ahlam is never far from the ethereal thrum of the desert, a “land wrought for ghosts…thronged by spirits, the wind in the brush a moan, a song.” With a backward-looking structure that moves effortlessly through space and time, Sonora is a gritty incantation, a coming-of-age story steeped in dark magic.

Born to a Palestinian father and an Israeli mother, Ahlam stands apart from the students at her well-to-do suburban high school. Her family lives in an apartment permeated by the smell of “smoke, Turkish coffee and cat shit.” Her mother works two jobs and suffers frequent migraines. To strangers, Ahlam’s taxi-driving father explains away his accent by saying he’s from “the Holy Land.” He assumes the name Joseph and sometimes refers to Ahlam as Ariel. “You will understand when you are older,” he tells her. “Ariel is pretty. You can use it when you want. Don’t ever become attached to your name, Ahlam, or to the place you are from.” Though her father believes this constructed identity will keep Ahlam safe and help her blend in, it only serves to intensify her isolation.

Ahlam occupies her time with ballet classes and late night taxi rides with her father. It isn’t until she befriends Laura, another artistic outsider, that she finds some relief from her loneliness. The teens quickly become infatuated with one another, escaping into a shared world of recklessness and experimentation. In graceful, breathless prose, Assadi reveals the girls’ artistic longings. Laura sings “music composed in the language of stars” and Ahlam spins and spins, using the “repetition as a means to block out the wreckage.” All the while the landscape murmurs in the background. Mysterious lights hover in the night sky, and several students from the high school die or disappear into the desert under mysterious circumstances.

Then Dylan, an older artist from New York City, befriends the girls, and they quickly become a trio. With a pocket watch and cigarette burns on his arms, “the jumble of centuries in his attire,” Ahlam suddenly feels older too, “as if by being in proximity to Dylan [she knows] things about freedom and death.” Dylan opens the girls’ minds but also changes the dynamic of their relationship, especially once he and Laura get romantically involved.

Ahlam’s parents finally save up enough money to buy a house, but that doesn’t erase the sense of displacement the family feels in their neighborhood. Her parents frequently fight, and tension mounts at home. When Dylan suddenly goes back to New York, Laura and Ahlam find themselves adrift. They are increasingly threatened by the destructive charms of the desert: Ahlam’s visions become more disturbing and Laura grows restless. Ahlam has started to lose herself in Laura, her own identity obscured by her friend’s wild confidence. Ultimately, they follow Dylan to the city, where they hope to escape the desert curse and pursue their arts.

They retreat to Dylan’s loft apartment on the Gowanus Canal, but Brooklyn is a confused blur of excess and bad decisions. Soon, the girls set aside their creative pursuits. The “years smash together…an eternal room full of empty wine bottles, ashtrays overflowing, the maze of screeching trains, Laura at the window, Dylan and his parties, filled with fur and cocaine and moderate celebrity…” There’s a numbness and overall lack of grounding to the New York sections of the novel, and this is precisely the point. Assadi works a kind of strange alchemy in that Dylan’s neighborhood, despite its crowded rooftops and wild parties, is rendered as cosmically empty. Ahlam and Laura remain entangled, but when Laura’s orbit begins spinning dangerously out of control, Ahlam can only stand by helplessly, as though watching from afar. Ahlam’s New York City is vacant and eerie, saturated in memories of creosote and wailing coyotes. No matter where she goes or how much she wishes otherwise, she can’t escape the pull of the desert.

Like coming across an animal skull in the sand, gleaming and picked clean, Sonora is as striking as it is unforgettable. “We are all waiting for a form of transport, a ship, a saucer, to carry us out of the too-dark night,” says Ahlam, sifting through her scarred past. First friend, first love, first loss: these are classic defining moments in any young person’s life, but in Assadi’s captivating hands, the familiar is made strange, extraordinary.