Chastity Belt started in 2010 as four girls drunkenly running through frat houses and college parties screaming “Chastity Belt” and jumping on tables and creating a glow around themselves. Since then, they’ve grown to write actual songs: their first album No Regerts (like a bad tattoo) features unapologetically titled hits including “Giant Vagina,”  “Nip Slip” and “Pussy Weed Beer.”

Now, on the eve of Time to Go Home’s release on Hardly Art Records, the girls are moving past the jokes, writing better music, and keeping their eye-rolling punk roots intact. I talked to the group’s singer and guitar player Julia Shapiro about Chastity Belt’s frat-house days, Macklemore masks, and the Seattle rock scene.

FZ: How did you get started with music?

I’ve heard you say that Chastity Belt got started as a joke college band.

We came up with the name before we had any songs or had played any shows or were even a band. We would just yell “Chastity Belt!” at other house shows and start chanting our name. Our first show that we ever played was for this thing called “Beta Fest”–it was a battle of the bands, so we decided to write a song for it and perform this one 6-minute long song. We had our friend rig the votes by just putting in tickets all night so that we would win. I also think that no one else really knew it was a competition, so yeah. We won. With our one fake song.

Did you ever release that song?

Oh no. Definitely not. I don’t think we’ve played it since. The lyrics were pretty good. It was just about wearing eyeliner, stealing cigarettes from our moms, surrendering to the god of punk. We put a bunch of eyeliner on and wore shirts that said “Chastity Belt.” I had red face paint dripping from my eyes so it looked like my eyes were bleeding.

What was it about the term “chastity belt” that you guys were so drawn to?

God, at this point, it’s so hard to remember what we were thinking. I think we thought it was funny? And feminist in a way? It was me and (bass player) Lydia (Lund) who came up with it. We were kinda drunk this one night and were just like “Chastity Belt would be a good name for an all female band.” And then we decided that we were gonna claim that name. 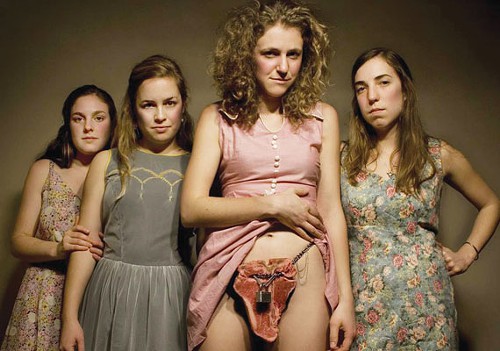 The lady who took the photo, Sarah Creighton, actually made it. That was mostly her idea. We told her we wanted raw steaks to be involved in the picture, and she decided on the raw steak chastity belt. We were just like “yeah, sure, we’ll do that.”

Did you eat it afterwards?

We thought about it and then, no. It was just a little bit too handled at that point to want to eat it.

How do you like working with Hardly Art Records so far?

It’s great. It’s really chill. I feel like they’re not super business-y for being professional. It’s not uncomfortable or weird. I’m friends with the guy who does PR for the label, so I see him all the time. I feel very up to date with stuff. And I love the other bands they’ve signed. It’s cool having a label that’s local. We can just stop by, record and hang out with them.

I feel like Seattle has the best music scene in America going on right now. Can you tell me more about it?

I haven’t been (in a band) in another city or place aside from touring, but from talking to people, it does seem like Seattle is the best place to be if you’re playing music right now. I feel like all the local bands are super supportive of each other. There’s a very DIY scene here. Recently a lot of our favorite places to play have gotten shut down, which is sad, but I don’t feel like it’s the end of Seattle music. I feel like there are so many people here who care about it who are going to create spaces for music. But we’ve never had a shortage of shows. People are always asking us to play.

You’re about to go on tour with Courtney Barnett–have you worked with her in the past?

No, but we’re all really big fans of her music, so it was really exciting that she wanted to tour with us. We did meet her last time she was in Seattle, she played a show here and then she did an in-store. We were meeting with a guy from Sub Pop right by the in-store she was doing, and we mentioned it to him, and he was like, “Oh, I know her, I’ll introduce you.” And so we got to meet her through him and then we ended up meeting her again at Sub Pop. Just from talking to her–even just from listening to her music, it’s so weird and everything–I feel like we’ll get along great.

What do you usually drink when you’re onstage?

I wouldn’t say that I’m necessarily drinking onstage, but before…it depends. We used to get really wasted before shows. That was more of an early thing about the band – we were all kinda nervous, so we’d get wasted, and then we realized, maybe a year into playing, that we played a lot better when we weren’t wasted. So yeah. We try not to get too crazy. I feel like I’m the one who gets the drunkest. It happens. (Laughs). Our best shows have been when everyone else in the band is sober and I’m pretty drunk.

In your video for “Time to Go Home,” there’s a scene with all these shirtless guys wearing Macklemore masks on. What’s that about?

We thought it would be really funny. We originally wanted the real Macklemore, but that wasn’t possible. But we actually did get his permission to use his masks. We know his lawyer pretty well because he’s also done stuff for us, so it was easy to get that approval. Our original idea was actually to have different people wearing Macklemore masks throughout the video, in the background.  But that didn’t happen. It would have been really funny.

You’re also in the (self-proclaimed) supergroup Childbirth with members of TacocaT and Pony Time. Does that project have any plans for music soon?

We haven’t recorded anything yet, but we’re talking about recording in April. We have some new songs, and we can also write songs in a second. We definitely want to put out something soon.

You had a cameo in TacocaT’s “Crimson Wave” music video, which has recently gotten publicity for being the inspiration for Katy Perry’s Super Bowl Half-time show. Some even say she stole the Super Bowl sharks from that video. As someone who was on set, in your professional opinion, did Katy steal it?

(Laughs) It’s hard to say. It could just be a coincidence. All I know is I really like how much press they’re getting for it. I think it’s funny that it’s blowing up like that. When we were watching it, everyone was just like, “Oh, this looks exactly like the TacocaT music video.” But…yeah, she probably stole it. (Laughs). Let’s just go with that.

Where do you think punk music is headed?

I don’t even know what punk means anymore, but I don’t think of it as a musical genre; I think of it more as an attitude, which I think a lot of my friends and the people I know have. It will not die. It’s always gonna be here. There’ll be space for it.