But come with me, I want to show you something

The original wound, the origin of the world.

My mouth to your book. Your body to my book.

Dear Jenny, this piece will not take a linear or conclusive approach. I cannot tell you exactly when each thought performed itself. There is no timeline. Your words I underlined while reading appear here in italics. If you’d like, skip around. Look around. This place is for you.

I notice two women exercising together at the park. They seem to take pleasure in watching each other mirror the movement of their own limbs. A visual dissimilarity in their outlines: a synchronization of physicality. They take turns lying on their backs while the other is standing pulling her leg into herself. An elegance suggesting a background in dance, or swim.

I wonder if these women live together or meet at the park on occasion to exercise and talk. What do they discuss while moving together?

I try to make-up new narratives in my head, desiring to see, anew, the eclipsed relation of females in public.

While conducting some research a few months ago, I stumbled on a website whose sole purpose is to archive and map queer spaces. The maps are broken into categories based on gender. I browse the historical lesbian sites where each listed map points to a residence of a specific lesbian person or couple –– not a single bar, park, or public space. A disclaimer note at the bottom of the webpage: “Many of the sites featured on our website are privately owned and not open to the public. Please respect people’s privacy and do not trespass.” I see a map of places I cannot enter, objects I cannot touch, body knowledge I cannot reach.

Presently, I’m observing light slice through the trees onto my forearms and ankles. Your novella, Paradise Rot, sits beside me in a park. I cannot seem to open the pages without forming rooms of relation. “Bodies are absent in architecture, but they remain architecture’s unspoken condition” Elizabeth Grosz writes in Architecture from the Outside. 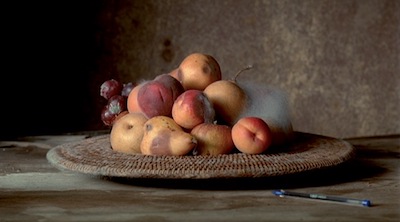 I’m thinking about the decomposition of genre. I’m thinking of how Jo’s roommate, Carral accumulates rotting apples until one day, she decides to discard them in a bag. Throwing them all together, all these different varieties of rotting apples together.

The image embedded here is a film still from Sam Taylor-Wood’s short film Still Life. The decomposition of this pile of fruit is manipulated to occur within a specific time frame. The mold in this image appears almost translucent. It is a ghost –– a glimpse of what the fruit will become.

Taylor-Wood’s video is created as a loop wherein the processes of decomposition and composition fold in on each other until they are inseparable to the viewer’s mind. I begin to think of this word ––“loop” ––as I engage with your text-body.

“In electroacoustic music, a loop is a repeating section of sound material. Short sections of material can be repeated to create ostinato patterns” (“loop,” wikipedia). In your novella, the sound material becomes the center of the text. From the first moment Jo arrives to live at the warehouse she delineates her experience through the heightened sounds that occur there:

And all the while I could hear this hiss and bubble that I
still didn’t understand, as if we were far down on a quiet
seabed and listening to wind howling on the surface.

I imagine this “hiss and bubble” looping as Jo begins her relationship with her roommate, a being whose existence you offer through Jo’s sensory experience of her body existing in their peculiar living space where not a single wall exists to stop the loop. The sounds move fluidly, exceeding the structure that encloses their relation.

Jenny, we meet your novella’s narrator, Jo, at a moment of arrival. She is entering a new country. We learn she is studying there. Where she will dwell and with whom compels the story that unravels.

In my notes on the text, I write the phrase: “embodied architecture.”  I think of how the narrative is dependent on Jo’s entrance into this warehouse and the person it already contains. An ecology envelops her upon this entrance. She enters the structure as one would enter a living organism: attuned to the 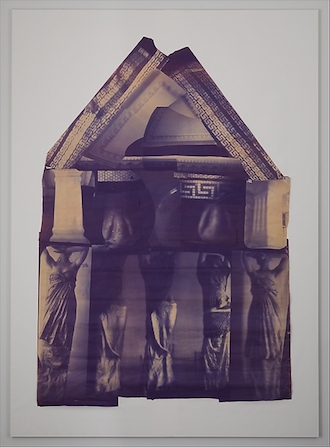 breath, textures, shifts of its tissue.

The house was raw and porous.

Is the house, then, empathetic to the bodies living within it?

In the essay “Suspension of Belief: Some Thoughts on Translation as Subversive Speech,” Jen Hofer writes:

“The clock, the gesture, the map, the meal, the notation, the love letter, the gravestone. Translation is present in every aspect of our lives: it is a daily activity. Touch, speech, writing, image-making, intimacy. All writing is translation: from perception and experience into language. The report or signal of the object is not the object.”

Jo translates her experience in the house-body through sound, touch and desire. Marjam Idriss translates your words into English. I wonder, did you work together or did Idriss translate on her own? Even without this knowledge, one can say your relation is palpable in this book object. An invisible architecture.

The language grated on my throat. The words were wrong

Towards the center of the text, Jo discovers the warehouse she’s living in was once an abandoned brewery.

I forced the image of Carral out of my head and pictured the bathtub, the bathroom, the whole house, as a beer glass slowly filling with sweet fermented hops.

How does one translate the cultural value of language? The ecologies that act as its various contexts?

As a reader in America, I am halted by the beer imagery. I find my mind sorting through images from alcohol advertisements that socialize and sexualize the consumption of the substance. I cannot recall a single one that doesn’t contain female characters in the narrative. On a recent search, I came across a commercial where a woman appears as though she is being casually interviewed in a nightclub. The conversation is not casual. Her first line is a clear response to an unrecorded question: “No, I’ve just never had a boyfriend. I’ve always been more interested in women. I just really love women.” The camera holds the faces of the woman and her girlfriend for a second too long after she finishes speaking. The punch line arrives: the brand of the liquor being advertised here is The Tragedy.

Several months ago, a friend of mine recommended the essay, “Uses of the Erotic” by Audre Lorde. This text re-shaped the way I understand the disempowerment of the female body and its desires, and the disempowerment I feel surrounding my own body and its desire for other non-male bodies. At some point, I realized how rare it was to read a line celebrating this stigmatized, stereotyped relation. This realization that brought me to your other art form, your music –– to its dark yet liberating ecology where women can sing: “I arrived to town with a toothbrush pressed against my clitoris.”

I see your book working to ask: how does one re:translate this relation against the outlines they have drawn for us? How does one record the excess of desire?

Where everything on Pym’s body bulged, as if something under his skin was always trying to tear its way out, Carral’s skin was the pristine surface of a water. She let me stroke her, lying completely still

How does queer relation unfold in such a contained, yet porous ecology?  Jo is learning biology at the university. You describe her beginning to study her roommate and home as an organism. Their microscopic shifts becoming immense, eerie, all-consuming.

The world of the living is a hierarchy, where each level in the biological chain feeds off of the level below.

Throughout nearly the entire narrative, the characters’ relation occurs enclosed from the outer biology of the city. Their visceral intimacy only occurs within their enclosure where they begin to mirror each other’s movements like the women I observe exercising in the park. The translation is not 1:1.  Their bodies lose their walls:

I gleaned and gathered something painful from her that didn’t fall to the floor, but that braided itself into my body from hers. 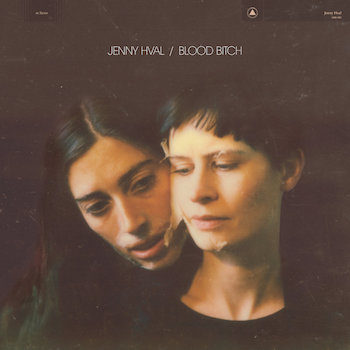 I think of the cover from your sixth album, Blood Bitch. That seam of skin where the subjects’ faces have grown together, or are continuing to grow.

This becomes the site which is feared by those who hold power: the dicks, the monuments, the governments, the corporations.

Is biopower disabled? Or re-written?

I think of erotica as a genre: how it has been consumable, reproducible because the female body has not loved itself. When the body does not love itself while touching another, it becomes consumable by the violence of the other.

I want to know, what were you reading when you began to write this?

Towards the end, your voice begins to exceed structures. A moss that exceeds its origin.

I feel myself slip under it, like a great blanket.

I ask others to come with me.

To read is to enter the translation-body that is your book-object that is the erotic-object.

Jenny, I read your text in many poses. Lying on a bed of grass. Listening to your music. On a subway going to therapy. On a bench in a park, pretending that I do not participate in capitalism.

I find your face in the inner back cover. You have a teal blue bowl cut. As I write this, my head is shaved, blonde. You’re holding an axe. Your gaze is waiting at the back of the book for us.

I hold your gaze back and feel a mushroom bloom from my ear. A clump of bodies composed as if to decompose. A blade, of what I do not know.

[1] “Woodman was on the cusp of a change in her art. Feeling hemmed in by the intimate, Symbolist-inflected tableaux (in which she often appeared nude) for which she had become known, she strove to make her art less personal and greatly expand its scale.” (Via the MET’s archive)

[2] In The Quietus, Karl Smith writes on Ren Hang: “ ‘Controversial’ is a relative term. Like ‘boundary-pushing,’ and other interchangeable permutations of that same idea, so often trotted out in place of any real engagement, it relates more to the constricting apparatus than it does to the subject itself.” I think the same can be said of your work.