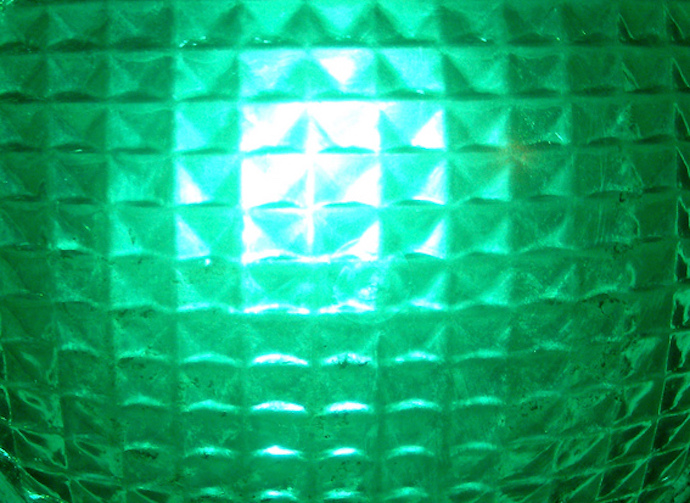 And while she was waiting for the bus on the main road, in the piss rain morning, a sedan stopped at a nearby intersection. A young boy was riding in the back seat of the sedan. He began to look at her. He had a face like biscuit. What he did then was too charming to be charmed by:

For his hands began to rise from the direction of his lap; and in them was revealed to be a small-breed tan-and-white puppy. The boy looked at her and the puppy looked at her and the boy did not smile. She did not smile. The light changed and the sedan carried off both the boy and the puppy. Had he been bragging or sharing! On the roads the water ran crosswise from the traffic. The bus accepted her.

Downtown the work was instructions, on screens, on reams. There, the stacks of old paper, her hands upon them sorting. These sucked her skin dry. Puckered cuticles; paper cuts. “Did you fill out your timesheet for the week,” asked an empty-faced gal named Jan. Kind Jan was trying to say she could leave when she wanted to; it was 6 o’clock on the final day of the month. The young woman responded yes: she had filled out the timesheet. And once Jan was ship-sailing down the cubicle alleys, she did fill it out, accounting for time and space and her body if not her conscious thought. On her way toward the elevator bank, she submitted the sheet lightly in an in-box. The office was full of people but empty of their presence.

In the elevator she remembered the puppy, whose eyes she now remembered as full dark, lid to lid: a cartoon character or an alien on a primetime science-fiction drama. Its fur had been feathery. Thinking of it she found she amended the texture to “whispery.” The elevator opened its doors and in doing so hurried her out.

Upon release to the outside she found that though it was no longer raining; outside the air was pit-damp. O’ the world and labor and mood are all plastic, she thought, in a smooth arch, or archly. This thought bore only the semblance of meaning. She was more clever than smart and held no ambition. Five feet away someone was pissing along the park’s iron balustrade. It made a fountain noise.

There her body was an inconvenient anchor. She decided to take a rideshare home, and ordered. As she waited she braided her hair, greasy like old metal. “I have a book available for free download,” the driver told her quickly. His scarf was gold and strutty in the AC, his nose lewd. “It’s for my own amusement and for others to laugh.” She smiled as if she was being polite but she was not being polite, only non-confrontational. The driver reminded her of other people she had met. The way he spoke fluently of himself and his preoccupations between green lights. Many people she had met were like this, self salesmen. This was a pity commodity! Some people were generally nice and others sinister. But that was a useless evaluation, for these people were all useless: a bunch of boasty moons wrestling for tide control on useless planets.

The car stopped at a red light and she caught the eye of a woman waiting for the bus. A night shift. She wondered if she was now biscuit-faced. She watched as her hands raised. Only there was no puppy; only there were her hands, those pale pigeons. They flew around in the back of the car while the woman at the bus stop seemed not to watch. The young woman could not blame her: while a puppy is notable, hands are not. Then the light turned green and the car driver was talking and there went on being no puppy, no feathery, no, she meant, no whispery.

The afternoon was running into a discontented dim, lately. The driver giggled to himself or to her. There was no need to make eye contact with anyone anymore. The car went on, arrived. Emptying she thanked the driver, not promising to read his book available for free download. “Review it, only if you like it!” he shouted after her. As she walked up her front stairs she had the thought: how amazing there had been no collision, with all that talking, with all that sale!

Up in her inert rooms she endeavored to change clothes and, through the open window, heard the huff of a car below, then had a dicey thought that her driver was idling, waiting, to exact some kind of vengeful crime for her inattention. She wondered if she had not expressed enough visibly polite interest in the book available for free download. She had not!

There had been recently shootings in the neighborhood, one on the Wednesday prior three blocks south, and one just two nights ago, beside the park. Below a motorcycle blurted its rev. There was a miffed red mark below her left breast. It was her underwire of her bra that had been poking. Though the windows were open her rooms smelled vegetal and dusty and she sighed, remaking herself in a t-shirt and loose jeans and a sports bra, wiping her body away.

She locked both locks behind her and descended the interior stairs. A dog barked from behind a door. “Rrruff,” she said to it, softly, whispery, feathery. Out in the evening she swiped the block for the car, or the driver. There was no sign, no visible threat, only her own lingering. She walked down the block to the drugstore. Oh but didn’t the late air smell tricky, of frying shrimp, of ozone?

At the drugstore the cashier was young and large and misshapen as a potato. He nodded starchily. Potatoes, biscuits, pigeon peas. In the aisles she could feel her hair unbraiding. She selected a box of all-cotton tampons, applicator-free, plus a candy bar for dinner. The candy bar was the kind you could substitute for a meal because of the protein in the peanuts and its high caloric content. It was not her favorite candy bar but it was also not her least favorite, and therefore purchasing it was a positive effort of self-care. For you see, still, there are so very many kindnesses you can do for yourself!

She sighed one time and then another, bleary by the magazine rack full of photographs of women in wrap dresses. There was no one in any of the aisles. It had at some point gotten late. Passing the cosmetic tools display, she visualized buffing her fingernails into a blur. It’s me who is plastic, she thought, swallowing a breath, shocked at the blaze of her own summoned reduction. Of course this meant nothing precisely. Though she felt as if the thought had wiped her face of its features, with the broadside of her own dumb thumb. Probably the drugstore would be closing soon. Not anything was as wise as it sounded.

At the register the potato cashier scanned the tampons and gave them to her, scanned the candy bar and gave it to her. She submitted her telephone number on a keypad, for discounts. She did not want a bag. “On holidays we get one-pounders of these,” he told her, and somehow continued to talk. “Last Christmas I got the peanut butter cups. I couldn’t eat both so I gave one to my mom.” He took her money. “Like dinner plates! Like frisbees!” He gave her the change and a receipt and as she folded it into strict quarters she listened to what the cashier was saying, which was: “If you froze one of those you could kill a man with it, clobber him over the head, thank you, thank you, have a good night!”

Amanda Goldblatt’s work has been published or is forthcoming in NOON, Fence, Hobart, The Southern Review, and elsewhere. She lives in Chicago, and teaches creative writing at Northeastern Illinois University and StoryStudio Chicago. More info is available at amandagoldblatt.com.