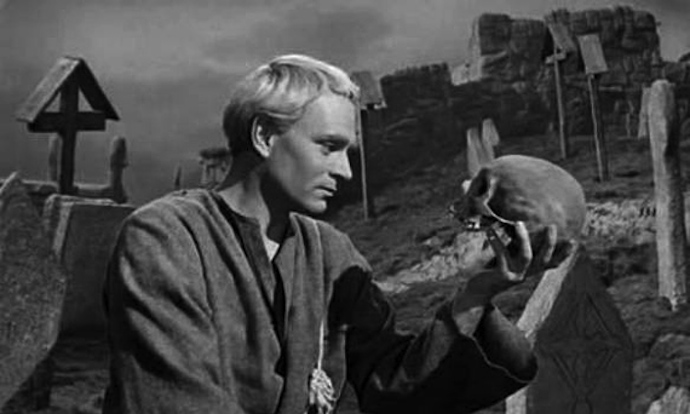 If you haven’t read Hamlet, you’ve read Hamlet. How you look for something, and nothing is there, or something else that should not, in your mind, exist.

In 1946, Alfred Hitchcock asked Cary Grant to play Hamlet. “To be or not to be” would be delivered from a psychiatrist’s couch and updated to: “What the hell do I do now?” Grant, born poor Archie Leach and believing from age nine to adulthood his mother had abandoned him when really his father had secretly committed her to an insane asylum, refused the role. He said he was too old. In reality he couldn’t endure the first line, “Who’s there?” Grant said, “Everybody wants to be Cary Grant. Even I want to be Cary Grant.”

In high school, I staged the final scene of Hamlet. I lip-synched John Gielgud speaking Hamlet on a record, and Goler, from Turkey, mouthed Sebastian Shaw’s Horatio. I wore a cheerleading uniform, an “H” pinned to my chest. My Hamlet died, and Goler mouthed flights of angels sing me to my rest. Then he pretended to stomp on my head. The class laughed. Shaw would have favored this comic Horatio. In Return of the Jedi, he played Darth Vader unmasked. His hairless flesh is dead fish and scars mottle his pate. The action figure of this character is extremely valuable.

Hitchcock cast Gielgud, a wartime Air Warden, in Secret Agent, about a man forced into espionage but reluctant to act. (T.S. Eliot was an Air Warden; Gielgud later recorded the poet’s book about cats.) Smitten with female lead Madeleine Carroll, Hitchcock grew bored of Gielgud and filmed him indifferently. Carroll was the type that obsessed Hitchcock: an “English girl, looking like a schoolteacher, [who] is apt to get into a cab with you and, to your surprise, she’ll probably pull a man’s pants open.”

Grace Kelly epitomized fire under ice. Though she insisted Hitchcock treated her “like a porcelain doll,” in Dial M for Murder he subjected her to a brutal beating scene that covered her in bruises. “Torture the women!” Hitchcock exclaimed. Kelly’s weaker double was Tippi Hedren. The director controlled what she wore, the color of her hair, her diet. He hired spies to ensure compliance, and he once sent a doll of Hedren lying in a coffin to her five-year-old daughter Melanie Griffith. How Jimmy Stewart’s Scotty viciously transforms Novak’s Judy into Madeleine predicts Hitchcock’s warping of Tippi and summons Hamlet’s idealism. If the world is not exactly as Hamlet desires, he must convert it or kill himself.

Idealism says no to what is. Nothing would exist without idealism. The “or” that harries Hamlet, to be or not, is not as tragic as the “and,” not to be and be. Hedren surely hated Kelly as a drowned woman, such as Ophelia, would a wounded sea nymph. Puck in Midsummer Night’s Dream heard an unharmed mermaid express, while riding on a “dolphin’s back,” such “a dulcet and harmonious breath / That the rude sea grew civil” and “certain stars shot madly from their spheres.” Gielgud, who played Oberon in ’31 (and so required the “juice” of “hateful fantasies”), won an Oscar for his acerbic butler in Arthur, the ‘81 comedy starring Dudley Moore. Moore’s ‘79 film 10, featuring the cornrowed Bo Derek, is about idealism’s torture. You don’t possess your brain’s beauties, the longing palsies you; you do, disappointment does.

10 was playing on a television in Goler’s parents’ bedroom when I first felt a girl’s breast. This was 1980. I was thirteen. Gina pulled me down to the bed, and she kissed me, and she placed my left hand on her right breast, and she put her hand on my crotch. Goler rushed into the room screaming, “Kopec-tu-shock-yay!” He later said this was Turkish for “fuck-shit-bitch.”

The day I mouthed Gielgud’s Hamlet an old girlfriend, Ursula, visited the school. The last time I had seen her was two years earlier, during the trial of a young American named Dieter. After dating Ursula three times he broke into her house, tied her and her family up, and attempted to rape her. He failed, because she convinced him his hatred for his mother had made him violent toward women. He rolled to the floor and wept. He pled insanity and was sentenced to two years. Ursula feared that once released he would hound her again. She and her family moved away, and she changed her name. Now, two years later, minutes after my performance, she was Ursula again, since Dieter was on death row for drowning another woman. Ursula never revealed the name she had assumed. She told me my performance of Hamlet was irreplaceable, and she missed me while she was someone else. That was the last time I saw her. Fifteen years later, I realize she kindled my soul, though I broke up with her after touching Gina’s breast. I have tried to locate her on the web. No one going by her name has appeared.

No one is who Hamlet thinks Ophelia is. Hamlet asks her if he can rest his head on her lap. No, she says. Did she think he meant “country matters?” (Country puns “cunt.”) She thinks nothing. “That’s a fair thought to lie between maids’ legs.” “What is?” “No thing,” Hamlet replies, implying the vagina, in Elizabethan England a lack, an absence, a zero, O, the hole. Ophelia, who would have been played by a boy, hollows the play. Everyone else who dies has it coming. The milty stream soaks to the bone innocent Ophelia. Fast-talking Ursula would have called that last sentence sappy.

Behind every tree is Dieter or Hitch who torments the world into masturbatory figments. When I taught Hamlet, I remembered my old professor, Pike. He said, “If Freud is right even the author’s pencil is a substitute for the phallus. Anyway, let’s . . . .” Pike noticed a small nub of chalk on the seminar table. He picked it up long-ways between thumb and forefinger and held it up to the class. It was a quarter inch. The class laughed. I tried the joke during my class on Hamlet. The men were agog, the women mortified. I emailed the class later to claim I had a cold and consumed too much Nyquil. A year later I was on heavy lithium. While explaining Freud’s Oedipal Theory to another class on Hamlet, I felt my voice leave my mouth and hover three feet to the left of my head. The voice said, “The infant never wants to stop sucking its mother’s breast. Daddy, who also likes mother’s breast, pulls baby off, shouts, ‘those titties are mine!’”

Yesterday I read the essay of a woman in my most recent class on Hamlet. She had spent the weekend walking around the Museum of Modern Art, and she had gotten so chafed between her thighs she felt like she had been “fucked by a ghost.” If Ursula would appear in one of my classes, I would become something other than the sesquipedalian man I now am. I would speak only what I know, and she knows what I mean, and she loves it, and we are lovely and quiet.

Skulls are the quietest objects on earth. David Tennant, Dr. Who, uttered “poor Yorick” to the actual skull of composer André Tchaíkowsky. When Daniel Day Lewis played Hamlet, he saw on stage the ghost of his own recently-deceased father. He exited left and wept in the wings. He has not tread the boards since. Hamlet, who did not walk off the stage mid-performance, turned his obsession for self-murder into puns, paradoxes, hyperboles, and ironies, on clouds, gardens, acting, music, vaginas, death’s undiscovered country, nuns, fencing, what a skeleton dreams. He most loved riffing on what he was doing but did not want to, and what he was not doing but wanted to. Not one minute is what he would like, but every single second is meaningful.

French actress Sarah Bernhardt played Hamlet in 1899. Was he a girl raised as a boy? Is his mind is so capacious it encompasses male and female? Virginia Woolf, drawing from Coleridge, believed that Shakespeare possessed an androgynous mind, “naturally creative, incandescent and undivided.” Hamlet, asunder, enjoyed all but the last. So torn he could barely move, Coleridge observed, “I have a smack of Hamlet myself.” Samuel Taylor wrote the screenplay for Vertigo, for which Hitch initially wanted Grant, but Stewart ended up afraid of heights.

Grant’s “The Cat,” guilty of a rash of recent transgressions, prances over rooftops in To Catch a Thief, co-starring Kelly. She is sangfroid until she “plunges her mouth into Cary Grant’s.” In ‘58, Grant played opposite Eva Marie Saint in North by Northwest. It is about man trapped in a city of mirrors. Marie Saint, whose name is Eve, shatters the glass. She offers her hand, icy and burning. Southerly fans the wind, defying augury.