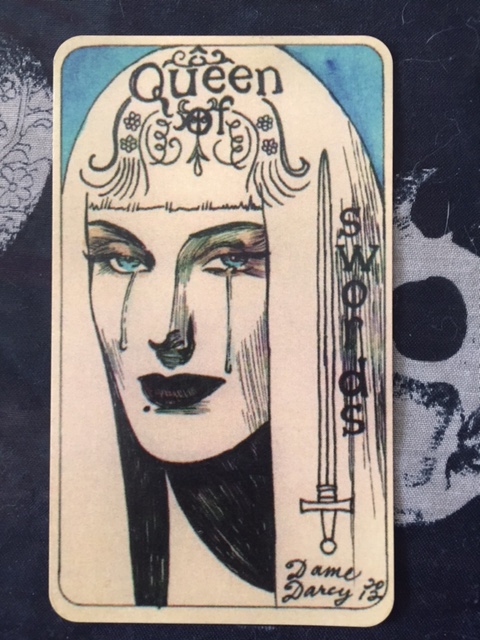 I am a mentally ill, queer, widowed, writer/artist in Hollywood. Cis-gender femme. Witch. I have an MFA from CalArts. I devote all my time to art and writing. My family and SSDI supports me. I don’t have a job. I am 38.

Ursula Legume is a semi-famous writer/artist that I have been observing over the Internet for a long time. She has been on my radar for about ten years. I don’t remember who added who on Facebook. March 2015 she makes flirtatious comments on my Facebook selfies.

One afternoon she Facebook chats me, calls me beautiful and talented, and asks me to hang out that day. She is getting her tarot cards read in Echo Park. She invites me to come along.

I meet Ursula in a small shop called Otherwild. It is raining. While she gets her cards read, I walk to a coffeeshop nearby. The rain soaks me to the bone. I feel elated, excited.

I come back with coffee and drink it. Ursula and I talk rapidly about literary gossip. We bond instantly. She knows a lot of the same people that I do. I get my tarot read. The reading is auspicious.The woman doesn’t seem to charge. I invite Ursula and her friend over to my apartment to watch the Oscars. Her friend watches it while Ursula and I talk about ghosts, witches, aliens, and schizophrenia.

Schizophrenia is part of my diagnosis. I have Schizoaffective disorder: co-occuring Bipolar Disorder and Schizophrenia. I hear voices. See things that aren’t there. Have periodic delusions. Ursula has a schizophrenic uncle who lives in a facility who she visits often.

They leave, and I feel suddenly lonely for the first time in a long time. It was nice, having someone to talk to in my apartment. I am so often alone. I live alone. My boyfriend Bobby and I broke up in December 2014.

Ursula texts me the next day. We begin to text. She flirts. I ask her, “Aren’t you married?” She said yes, but they have a unique marriage. I take this to mean she might be poly and realize we might be able to date. I am excited.

She comes over one evening and we sit, listen to Lana Del Rey, get stoned, laugh together. She leaves. I say after her, “Text me,” in a voice strangled with longing.

She comes over, all long hair and tattoos. I want to bury my face in her hair. I want to smell her hair. She smells like plums and jellybeans.

She eats a turkey sandwich in the gastropub and I eat a Reuben. She flirts with the waiter, gets him to take off his shirt to reveal bee tattoos.

On the walk back, she touches me softly on the waist and arm. It is early March, spring. We joke about how the waiter was putty in her hands, how femme passing erased our date in his mind and added to our catty complicity.

The two new tattoos she brought to lunch were a pentagram and a tarot symbol from the Empress card. I wonder if they relate to me. I am a witch. Into the occult, as is she. I am well-versed in the lesbian custom of getting tattoos for girls, I have many from my wife. I wonder this about her. I wonder if I am flattering myself.

When I look at her Instagram later, I see that she is posting photos taken in my apartment but I am absent. I wonder if she is keeping me a secret.

I am the other woman. Like the song, I manicure my nails, enchant my clothes with Miss Dior, keep fresh flowers, and will spend my life alone. I listen Lana Del Rey’s cover of “The Other Woman” over and over. It satisfies me.

I don’t know if her wife knows about me. I am her side piece. I am too married to my work to want a real relationship at this point, so this is fine. Or, at Ieast, I tell myself it is fine.

She frolics in my bed like a SuicideGirls shoot, and we joke over how many men would love to be there, but are not.

Most often I am in my bed alone, and she is not. I prefer it this way. Mutually unavailable, marking time in brief afternoon delights. I go back to my work, which I love more than breath.

“And as the years go by, the other woman will spend her life alone.”

She texts me first thing in the morning. She calls me pretty witch and sends emoji kisses. She texts me during third period as she plans lessons to the Cocteau Twins. I ask her if her partner knows about me. She says no. They are redefining their marriage. It is hard. I consider my ethics. Causality. Whether I am a symptom of a larger problem within her marriage or a home wrecking mistress.

I’ve never kissed her on the mouth. About the face and neck but not the mouth. She says that is one of her marriage boundaries and I comply. I yearn for this.

I do not want to possess her, but I want to know her better. I worry that my simple presence in her life may destroy her stability. I care more for her well-being as a friend then needing her to be my lover. But I want her. She is hauntingly beautiful.

She calls me her teen goth femme fantasy come to life, and I melt. I wonder if there is a place for us. The place I want is as a secondary to her poly. I want her partner to be okay with this. My intuition tells me she will not be when she knows. She does not know yet. I wait with baited breath.

I was once married to a woman too. She committed suicide with my pills when our marriage was disintegrating. I found her naked corpse next to me in the morning. I inherited the guilt and all of the wedding presents. The Wedgwood china sits unused in the box. Wedding pictures in my apartment. Our custom Etsy two-bride wedding topper on my desk.

Ursula comes over and sees these signs. They drove my last boyfriend away. The ghost is strong. I am haunted, yet she says she loves spooky girls.

I read Ursula’s tarot. Predict divorce, a change in residence, an approach and seduction, weakness on her part. The cards never lie. Twice already, we have read these dire predictions. She paces. Wonders if my wife’s ghost is sending a message of disapproval through the cards. I reassure her that my wife approves. Katie’s ghost is often with me. Katie’s ghost likes Ursula.

But does Ursula like Ursula? She is content in her powers, her beauty, her intelligence, but her marriage is troubled. I am a symptom. I am the other woman but by preference. I feel this will end far worse for her than for I. She has much more to lose.

I wonder of the karmic backlash that will come to me if I pursue her too ardently. I wonder, as we snap nudes of each other reclining on my watercolor bedspread under the tapestry of JFK and Martin Luther King. Our bodies tangle together and I’m in a SuicideGirls shoot for a moment.

Is it just sex, between us? We have not had sex yet. But will it be just sex? Would that be optimal for me? Am I a selfish jerk? I wonder these things. I wonder if I were a man, if she were a man, if I would act or feel the same way. Would I feel that my behavior was reprehensible?

Should the wife, the other, male sidepiece and I join together à la The Other Woman and seek some sort of misbegotten revenge? That sounds unlikely, fraught and nightmarish. I do not wish revenge. She has been honest with me. I am getting what I want out of the relationship, I think.

I want only to burrow my face in her hair and see all of her tattoos splayed out on my flowered down bedspread, to slide coconut oil over her body and move together thigh to thigh to orgasm.

I sit at my new MacBook Pro for days in and out. I type. Laborious transcription for a new novel that I fear may be embarrassingly commercial. I smoke weed. I await her texts. I await her next visit.

From Diary of a Hollywood Hedgewitch

Andrea Lambert is the author of Jet Set Desolate, Lorazepam & the Valley of Skin and the chapbook G(u)ilt. Her work has appeared in HTMLGIANT, 3:AM Magazine, Entropy Queer Mental Health, and Enclave. She has been anthologized in Writing the Walls Down, Off the Rocks #16, The L.A. Telephone Book, You’ve Probably Read This Before, and Chronometry. She is a visual artist and CalArts MFA. She is currently working on a memoir called Diary of a Hollywood Hedgewitch, an autobiographical fantasy called Scaffolding, and a poetry manuscript called Bleed Almond. Find her online at andreaklambert.com