“Flattered, indifferent. Happy to help. I mean, to paraphrase Ms. Gaga, do what you want with my self-presentation.”

After reading the exchange, I was reminded again of our performative selves online – our curated existence. The mass of images and texts that we have selected to comprise our online analogs. Much like a formally curated show in a gallery, we are pleased when someone responds positively to what we have intentionally presented them. Far from being offended, we are flattered that our work is so well-received. And much like an off-hand reference to a gallery, anyone can claim Artist or Writer in their act of self-presentation. In the 1950s, Jackson Pollock established painting as an event, as action. A body in conversation with a canvas. The goal of the painting was not to reproduce an object but to perform the body action. In this, the subject of the painter was foregrounded and the painter took on the role of performer. The emphasis shifted from painting as image to painting as arena, the act of painting took precedence over the painting itself. In viewing physical or digital space as the backdrop for the action of art, in our self-presentation online we fanaticize ourselves to be both artists and art objects in our right. In this context, art has become exhaustingly populous. It is less of a profession than a way of positioning oneself in the world.

I’m always hungry for any bit of insight or confirmation of facts that works to de-mythologize the artist. I can almost call it a fetish and I think I might. I suffer from immense confirmation bias – I keep a rag-tag collection of quotes from interviews and lines from stories to build my case against the myth of the artist. Because if the artist is simply ordinary, then what’s stopping me from becoming one with just a little research and hard work. Or even further, what’s stopping someone from becoming an artist with just a “curated” Tumblr. I remembered a quote from Henry Miller’s Paris Review Interview:

“What is an artist? He’s a man who has antennae, who knows how to hook up to the currents which are in the atmosphere, in the cosmos; he merely has the facility for hooking on, as it were. Who is original? Everything that we are doing, everything that we think, exists already, and we are only intermediaries, that’s all, who make use of what is in the air. Why do ideas, why do great scientific discoveries often occur in different parts of the world at the same time? The same is true of the elements that go to make up a poem or a great novel or any work of art. They are already in the air, they have not been given voice, that’s all. They need the man, the interpreter, to bring them forth.”

Everything we think exists already. We only need to learn it, draw on it, give it a form. There is nothing outside of us that we cannot let in. It is only a matter of collecting ideas, culling them in a specific way that suits our goals, and presenting them as our own – which they become through that process.

And as is the nature of inspiration, the Tumblr post also reminded me of something completely unrelated: a giant rabbit.

In the inaugural issue of Hazlitt, the print version of the online Canadian literary magazine, there are various short stories, articles, and features that I mostly found overwhelmingly boring. They were, perhaps, “too Canadian” and I just couldn’t relate (The second essay is satire, titled, Explaining Canada to Americans). But I didn’t buy the magazine – I just happened to be in the room when my boyfriend’s roommate, who gets review copies of books constantly, took the magazine out of a mailing envelope, glanced at it disinterestedly and said, “Anyone want this?” – so I wasn’t disappointed. The magazine, like most things, just appeared in my life so I couldn’t hold it to any expectations – it is beautifully designed and there are definitely a few stand-out pieces in the issue. It was another object to add to my collection. On the cover of the book-sized magazine was a list of tag-lines for notable features that it contained, one of which being, Shelia Heti’s Rabbit Eats Books. I flipped to the feature, which was part of their recurring segment, Shelf Esteem, where they go through the book shelves of a famous author in lieu of an interview. The books, and the stories of how they ended up with the author, tell an equally compelling history of the authors themselves as a traditional interview would. The tag-line on the cover was referring to Sheila Heti’s massive rabbit, which was more like a medium-sized dog if you want to picture it, who nibbles away at the books that are positioned closest to the floor on her bookshelf. 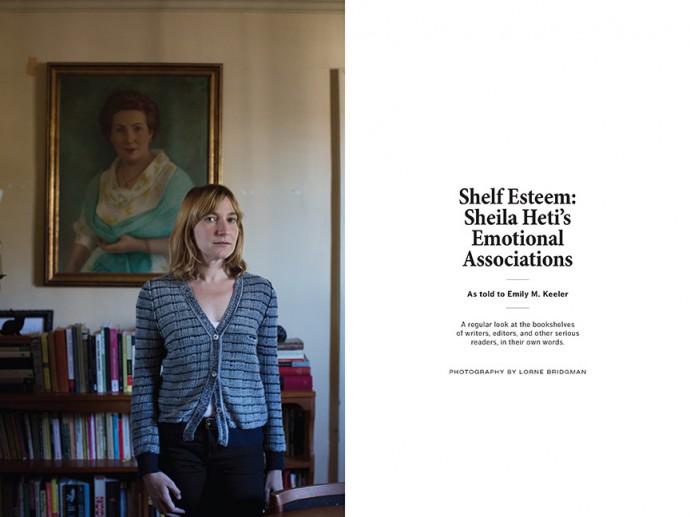 The piece reads like you are in the room with Shelia, because you are her friend and she’s invited you into the room, and you’re just sitting in one of her chairs, incessantly asking her questions about her book shelf (because that is how friends spend their time together). As you sit in her living room you ask her about a particular book and she says, “Leanne Shapton gave Self-Help [by Samuel Smiles] to me – or I don’t know if she meant to give it to me, but it’s hers. I think this is obviously one of the most beautiful books that I have. I read it, too, and it’s a really interesting book. This was the original use of the phrase “self-help,” and so the first self-help book. It just talks about the lives of great men, and how they lived, and how you’re supposed to learn from them. And now self-help is… very far from that.”

And now – if you’re me – you’re sitting here, in Sheila Heti’s living room, and you’re thinking that the term “self-help” has maybe reverted back to its original definition, secretly, without warning. You don’t know if it would be bad form to correct her (you’re not that good of friends) and there’s a pretty good chance that Shelia knows this already. After all, she did write the book, How Should A Person Be? which was, in itself, an experiment of constructing the “right” self through the examples of existing writers and artists.

As Sheila goes through her book shelves and talks about a particular book – the way it influenced her or the impetus for buying it – she is essentially speaking about herself. If you were not with her in her living room, you would get the same effect by scrolling through her personal Tumblr – her influences colliding with her own work in one steady stream. She is speaking to the way these books play into her identity and helped to construct it. From your chair you watch Shelia explain her excitement upon receiving the proofs for her book, Ticknor, as she points to the framed front-page. She says, “…I was so proud. I thought, Oh, I’ll be with Farrar, Straus, and Giroux for the rest of my life!”

Hazlitt (the journal) takes its name from William Hazlitt (the man), who praised the highest form of literature as “pure invention.” But the way we construct ourselves and our stories is increasingly reliant on references, for the purposes of legitimacy alone in the ephemera of the internet. Like Shelia, positioning ourselves next to Farrar, Straus, and Giroux gives weight to our words. It also shows off our good tastes and just how much we are “in tune with the cosmos.” It aligns us with the who we believe to be the “right” people and serves as an effortless shorthand. Shelia Heti is good because she is in good company. Dominic Pettman points out, rather critically, that, “A typical [Tumblr] user might pair an image of a topless model in stockings and suspenders — staring out from a Parisian balcony, halfway through winsomely reading a letter — with a quote from Anaïs Nin or Lana Del Rey. (Herself a torch-singer for an age more interested in the nocturnal glow of the smartphone.) Or even more likely, they might put up an animated gif of Anna Karina arguing playfully with Jean-Paul Belmondo in Godard’s A Woman Is a Woman; complete with captured subtitle, expressing a sentiment which precisely 34,000 fellow Tumblrs appreciate and can relate to.” Pettman holds a decidedly negative view of Tumblr and of a curated self that is reliant on seemingly incongruent signifiers of the past juxtaposed with the present. These references are the ephemera, offering no added weight, only images and words that have long sense lost their meaning in their new context. 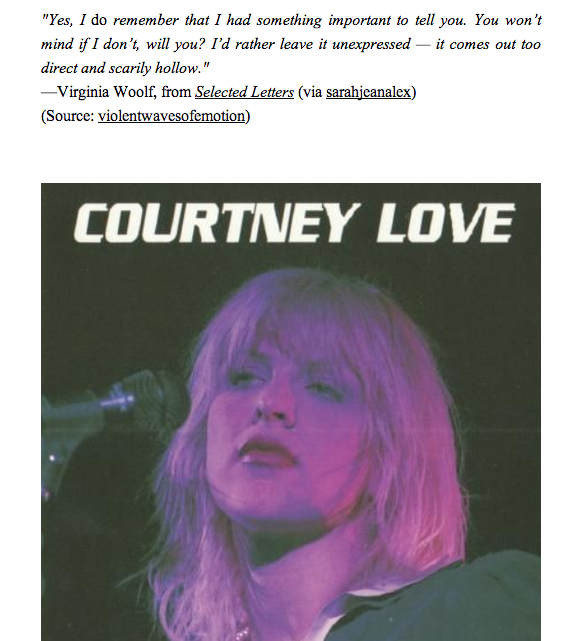 Courtney Love side-by-side with Virginia Woolf to fill out the portrait of the young girl. Via Tumblr.

Though I never thought that I would say this, I stand with Henry Miller – everything exists for us to use and recontextualize in our own art. In his argument against curated references, Pettman comes off sounding like a curmudgeon. We have always referenced ourselves in the things that we keep closest to us, like our books that we have collected on a shelf and now the statuses that we like, or the images we reblog. Pettman argues that the difference between “then” and “now” is that technology has afforded us the ability to collect and regurgitate at such a speed that a coherent narrative no longer exists or has any meaning. Like the giant, hungry rabbit we consume these materials rapidly and unselfconsciously. Our methods are transparent. Our references are no longer hidden away on our bookshelves, nor are we trying to hide them. That would be impossible. Through these practices, originality is obsolete but the definition of authenticity or originality is irrelevant, almost precious. If originality is a “sense of novelty and freshness” then, in the act of constructing ourselves, originality is not the goal. We construct a self-portrait, relying on existing objects – books, quotes from authors and artists, images, art – that we are more than happy to show off to others for them to use as masturbation material or for the material by which they align themselves. This is the new action painting – the curational archive. The referential self portrait. The portrait of any other artist could be readily used to explain yourself, just reblog it and caption it with “same.” The past consistently becomes the present, not through linear time, but through the constant reconstruction and relabeling of it.