Paul Cunningham: It’s been four years since Sense Violence (Sinnesvåld) was first distributed by Swedish literary magazine 10TAL in 2013. An English-language excerpt is now available for the first time in the form of a hand-stitched chapbook that’s currently being distributed by Garden Door Press. Has your relationship to this text changed in any way since its inception? Are you excited that Johannes Göransson is bringing your work to English readers?

Helena Boberg: Johannes’ translation truly excites me, as does the privilege of having my book published overseas. Even so, this piece is somewhat embarrassing to me. Partly because of its, from time to time, explicit content and partly because I notice other people’s reactions to that. I’ve never gotten to read from it in public radio for example, and I have this feeling that other translators have avoided it, as well as family members of mine. But, of course, I avoid it too. One thing I’d have done differently if I would re-write it today is to be more clear about the fact that it’s not my personal view; that there are just two existing genders in the world, and I’m afraid the book could be criticized for that which wasn’t my purpose. At all. But I still think that the dichotomy of feminine/masculine matters a lot and that whatever/whoever’s perceived as feminine is structurally oppressed, and whatever/whoever’s categorized as masculine is more highly valued (as long as the masculinity isn’t perceived as ‘trans’ since that implies new complications and a double bind form of discrimination).

PC: I’m curious if Sense Violence can be viewed as cutting ties from any particular Swedish poetry traditions. What kind of effect did the Stockholm Surrealist Group have on your identity as a poet? In a recent conversation with Aase Berg, she told me you are her favorite poet. Do you still keep in touch with her or any other members of the group? Or have you distanced yourself from the group?

HB: I’d say that one thing that drew me to the Surrealist Group was that I felt affined to use the less rational and less conscious aspects of intelligence for creative matters, as well as the use of dream-material, analogies, and a psychoanalytical kind of logic. Aside from that and amongst other things, the Surrealist Group experimented with de-personalizing methods of creativity, and held the thought of the individual creator, for something embarrassing and bourgeois. (After leaving the group, I chose a monologic form for my first book, made its subject an obsessive, possessive, expanding “I”, and started almost every sentence with it.) At the same time, there was a romantic interest for what was perceived as ‘authentic’ talent and originality that in contradiction gave the individual a selected position. Another thing regarding the group was that we were a group of people who criticized society and didn’t want to fit in. I think, after leaving this group, that my participation in it might have fortified my identity as a poet-as-solitaire, instead of perceiving myself as part of a concept or a tendency. I think that I still can sense a special bond to other members of the Surrealist group, especially those who were in it at the same time as me, and I’m personally close to a few of them. Early in November this year, I participated in the poet and Surrealist Group member Eva Kristina Olsson’s scenic staging of one of her recent books based on the myth of Niobe. I think I’m more influenced by the poetry of Aase Berg than I’d like to admit. Two other Swedish writers that has meant the world to my creativity is Ann Jäderlund and Lars Norén.

PC: In this chapbook-length excerpt from Sense Violence, it feels as though you have diagnosed society as sick with an oppressive, masculine violence. Anatomical language collides with medical language. The language itself is noticeably infectious (“fever globe,” “poisoned ground,” “mommy-sick,” “Family providers / parasites”) and it feels as though it is woman’s body that has been “poisoned into obscurity” or, rather, suspended in time. That a wronged woman’s body—a woman’s voice feels like it has come back to confront the male bodies who poisoned her. Your poetry feels like that opportunity. To confront wrongdoing and sexism. Is it a poetry of revenge?

HB: I’d love to answer yes, but poetry ought to be the worst weapon of revenge, without power to really damage or change anything in a short term. Perhaps it’s possible to state Sense Violence as a creative testimony that points out patterns of injustice, sexism, and violence. An accusation of consequences from gender normativity and masculine superiority that influences not only actions, politics, and justice, but also language. Cultural tropes and how people think and desire. It also forces people to relate themselves, others, and different phenomenons in certain normative hierarchies, which is like an infrastructure for potentially destructive forces. Genius mythologies for example, which are quite masculine-encoded, I’d say, and which are something I mock in the book. The voice of the book is often pleading a cause not only for a singular self, but for a feminine collective. The #metoo phenomenon has grown during this interview, in Sweden it has became something like a revolution, it is actually tearing institutions apart, or has at least made deep cracks in a few of them. I’m amazed and glad about it, not at least since people have been putting themselves at risk during this odyssey ­– which is certainly far more effective than my book. But still I think that some people develop feelings and points of view while contemplating art, or in the making of it, and these feelings and opinions may be crucial in social and political life. Even if it’s also important for art sometimes to be pointless, useless, redundant.

PC: The lines of your poems break like bones. The “city” itself feels similar to a fractured body, but it is also responsible for fracturing bodies (i.e. “And I / : lost in the city / like 1 slutty satin flower.” The city has “intestines / with tasty sweetness / Like lords and bees do.” It has positive qualities, but also negative qualities. The city has “mouths” and from out of those same mouths “murderous flowers” bloom forward. Meanwhile, the speaker is “dying / of thirst / for nutriments.” Beauty, violence, and sickness all seem to be linked to the fallibility of bodies. A brutal beauty (“velvet bells / have been opened up / with a knife) versus a sweet violence (i.e. intestines, bees, sugar). Is the speaker caught or tangled somewhere in a roaring, intestinal sublime?

HB: Perhaps that’s a possible way to apprehend it (obviously), another possibility is to identify tearing power relations, and also some brutal realism. I mean, a lot of people are subjects to oppression, sexism, violence and also discrimination, which exists in such a massive amount and sneaks into various kinds of systems. It’s intriguingly similar to being organic. Actually, a lot of sexism is viewed upon as laws of nature. But hopefully this isn’t news. I think it’s important also to formulate what is not news: that which is already an established part of the conditions, to make it an agreement, so to say, to base necessary changes upon. Narratives, formulations or descriptions, in art or elsewhere, could be an implement for bringing it further to life. But perhaps I have interpreted reality as “a roaring, intestinal sublime” in Sense Violence, just as you describe it. 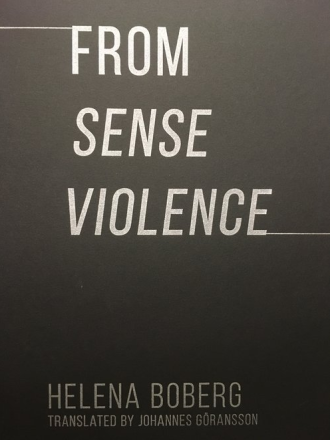 PC: What do you think can nourish a sick society? A place where “everything” is for sale? Is poetry the answer?

HB: There probably are no singular answers whatsoever? Nobody is independent of economical systems – what poet doesn’t desire to get properly paid and acknowledged for their efforts, for example. But I guess that poetry could be a contributory part of resistance towards exploitation if interpreted that way. However, the resistance would be lingering as a low intense force in people’s minds. There sure is also a lot of poetry that fits opportunistic purposes of various kinds, and also poetry that may be appropriated for unintentional purposes. Fantasy and creating for no commercial, political, or any other purposes is crucial and when that’s less acknowledged by society, it may be a signal that society is on an instrumental course. Although I think it’s not a bad thing to observe connections between outer and inner life, theories and fictions.

PC: Did any works and/or artists in particular influence or inform Sense Violence?

HB: In a way, yes, since I’m quoting an old folklore song, “The Ballad of Little Karin”, which is the very same song that inspired Ingmar Bergman to make a movie about rape: The Virgin Spring, as well as recycling small fragments of lyrics by the late, very popular Swedish singer songwriter: Cornelis Vreeswijk. I’ve also hid a few paraphrases from one of the most prominent male Swedish modernist poets Gunnar Ekelöf. His work A Mölna elegy also animated the stream of consciousness flow in Sense Violence—with the sharp difference that his focus can go from one subject and impression to another, consume, interpret and enunciate his experience from a safe and secure position, while the focalizer in my book observes and experiences violence against female subjects in every direction; even in language itself, although often in embellished means – by cute euphemisms, flower allegories and such. Another source of influence is a quite shady discussion that I followed in an Internet forum, between a circle of men, on the topic of violating women in subordinate positions. It scared me and made me sad, and that kind of sexually/gender related sadness, which derives not just from that single example, but from different domains in life, impinged me to write this book.

Visually, I feel close to the works of Henry Darger (whose writings are also inspiring) and one of his pictures enfolds the inside cover of the original edition. I’ve requested Black Ocean, who will publish the full-length translation, to wrap it in a Darger piece.

PC: I look forward to Black Ocean’s publication of the full-length! If you don’t mind my asking, why do you feel so close to Darger’s work in particular?

HB: Thanks! Perhaps it sounds a bit dusky to say that I feel close to him or his works, since he was a loner with an extraordinary destiny, who didn’t speak to people and trawled containers on a more or less daily basis, from which he collected papers and magazines which he used for the works of art he secretly created in the apartment where he lived. It is said that he was a victim of sexual assault at a young age and he had to make big decisions early in life. He discovered the beauty of a heaven ripped in tempest, on his own, while he, as a kid, walked by foot from Lincoln, Il, to Chicago, after having deserted an institution for “mentally disabled” kids where he was kept. Nobody knows why—since there’s evidence that he was rather gifted. It’s difficult not to be fascinated by the story of his life. What I feel close to, in his visual works, is the pain that I think is piercing the beauty. Also the use of collage technique and quotations. In his case it’s the use of calculating figures from, for example, women’s magazines and mail order catalogues. In my case, there’s quotations, paraphrases and fragments in motives, hidden and obvious references. Which is also a kind of calculation, in writing. He created a world with his huge production of writings and drawings, where the girls are queer and sometimes violent, sometimes victims of violence, and where the flowers are beautiful and almost intrusive. There’s a lot of drama in his works—movement, surrealism, and details.