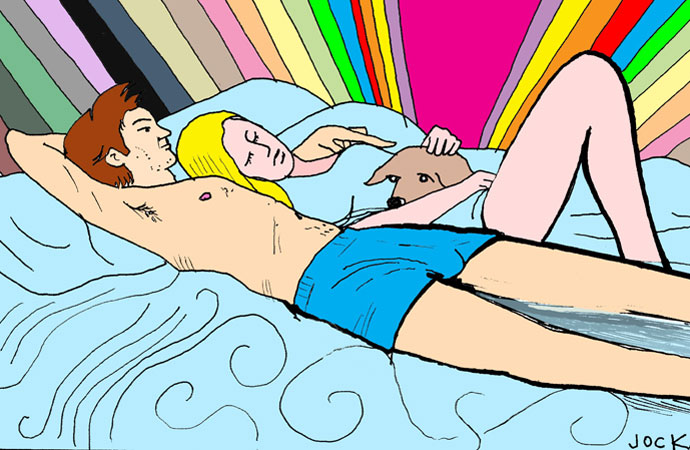 There is a reason romantic montages exist: when people are getting along, it’s dreadfully boring to everyone else. Stories are only interesting when the characters are in conflict. We want to see hearts torn out, torrid fights, or maybe just general anxiety.

This is why it is hard to write about Chris. He was too perfect, and not in some “he’s so perfect it’s freaking me out and I’m going to compulsively sneak off and give his best friend a squeezy just to make this shit interesting” way but in an honest-to-God “perfect for my dysfunctional ass” way. Thus: a montage of my own through the highlights of Chris and my second date––in order to fast track to the third date, where I am more riddled with conflict and insecurity. Please play this romantic music while you read the following scenes:

Chris calls me when he is supposed to, does what he says he is going to, and overall leaves me feeling self-assured.

We meet at the gym for our second date. Chris and I talk and laugh while sitting on balance balls and throwing a medicine ball back and forth. Surprisingly, I don’t fall off the balance ball (sending my feet flying in the air) and the medicine ball doesn’t hit me in the face and break my nose.

We lift weights together. I always deviate eye contact when he is on his last set and strains to lift the weights. Apparently this is too intimate for me. He doesn’t notice.

We sit in the parking lot in our gym clothes and say funny things to each other, laugh smile and look into each other’s eyes a lot. It’s awkward, but in a good way.

We decide to see a movie at the dollar movie theater next to the gym. Before we can buy the tickets, I lock my keys in the car. He doesn’t make fun of me, snap at me, or act annoyed. He just calls AAA and we sit on the hood of my car and talk more. I look into his eyes and touch his leg a lot. It’s a good leg.

The guy from AAA comes and jimmies the car door. We all cheer. He gives us two bottles of water. I don’t know why. We both are holding water. It’s a good thing.

We both enjoy putting our feet up on the seats in front of us in the movie theater, but people keep sitting in front of us, so we keep moving further and further back as the theater fills to capacity. No one told us it was student discount night. We end up in the corner of the movie theater. Neither of us mind. Queue more staring into each other’s eyes.

Whenever something scary happens in the movie I squeeze his leg and cuddle him. I scare easily but play into it more than normal. Like I said, he has nice legs.

He kisses me next to my car. It’s a good kiss. As I drive home I touch my lips and smile. I don’t remember the last time I was kissed like that.

When I get home he texts me to say he had fun. He calls me the next day like he said he would.

Any other time in my life a third date wouldn’t evoke any type of anxiety, but as soon as I started dating Chris my friends brought “the three date rule” to my attention. They told me that some dirty naked touchy-time stuff should happen by the third date or something was seriously wrong. Before this, I had always confused the “three date rule” with the “three day rule” introduced to me by the 80’s classic Valley Girl where three days without a phone call is considered a break up.

A prescribed amount of time before a couple has some moan-y moments together makes absolutely no sense to me. Not to state the obvious, but people should only have sex when they are ready, and I wasn’t ready to have sex or even to talk about sex with Chris. I just wanted to have fun and enjoy an uncomplicated interaction with a really hot guy.

I was reluctant when Chris said he wanted to come over to my apartment to watch movies for our third date. “Just going over to _______’s house to watch movies” was always my excuse to go neck at someone’s house when I was a teenager without my parents’ protective receptors going up, that and studying. (Come to think of it, I wonder why my parents never questioned why I didn’t get better grades with all the time I spent “studying.”)

Up until this point I had been planning our dates, and I was afraid I was going to come off rigid and bossy if I didn’t start accepting some of Chris’s date ideas. In my defense his idea for our second date was to go to a waterfall. I have no desire to rush off to secluded areas with a man I just met––even if he was charming. So I reluctantly agreed to a movie night at my house.

I bought beer and tried to talk my roommates into hanging out in the living room with Chris and I, but (shockingly) they had no interest in being a sex buffer.

But when Chris got to my house everything changed. Time flew and Chris was as charming and gentlemanly as ever. The date went seamlessly as we drank our beers and chatted through the movie. Before I knew it, it was inching toward two a.m. on a work night.

I sighed, “I just…” I trailed off and went into my head––Fuck. This is really not what I wanted. I wanted slow, and easy and––and now he’s had some drinks and it’s late and I’m going to be a dick if I kick him out now that I got him all liquored up––

Chris interrupted my neurotic train of thought––“Let’s talk about this like adults.” He didn’t say this with condescension or pandering, but in the way I needed to hear it. He said it because it made the most sense, much more sense than my habit of trying to manipulate myself out of uncomfortable situations without talking about anything but by making odd faces, sighing, and looking away.

“I just don’t want to give you the wrong idea about what might happen if you stay.” I said. This is far cry from my usual blunt addressing of this situation by saying “no touching” and falling to sleep.

And then, in a matter of a few words Chris made me feel better about him, the situation, and anything that might happen in the near future.

As we lay in my bed together, my dog, my usual bedfellow, began to cry in protest of being exiled.

“Is it okay if he sleeps with us?” I asked Chris. He agreed, but half-heartedly. Later I asked about this and he replied, “At that moment, I hated that dog.”

The next morning on my way to work I realized that Chris hadn’t yet texted me something sweet the way he had after our other dates. But as I reached the tollbooth my phone chimed.

“I have bad news: I think your dog has fleas. =( I found one on the way to work.” Not quite the charming text I was hoping for.

My first reaction was to text back: “I think you might have fleas.” But I reminded myself that I was really trying give this one a chance, and nothing good ever comes from chewing out a perfectly nice guy. I texted Chris back something sweet––yet passive aggressive––and we planned a date later the next week.