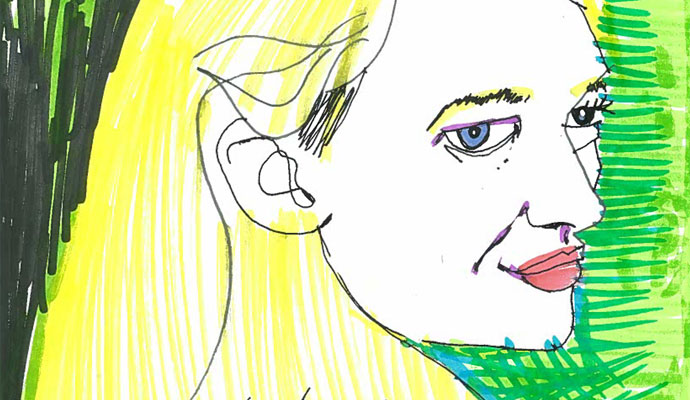 By the time I started seeing Aaron I had given up on dating in all but practice.  Up to that point I had followed a set of guidelines laid out by friends, blogs, and bargain bin dating handbooks, including but not limited to: don’t drink more than two drinks; don’t talk about religion, politics, or money; don’t say anything  offensive;  don’t say or do anything that might bruise the fragile male ego.

In short, I behaved in exact opposition to my personality.

I’d grown tired of these rules; they didn’t make sense to me logically. I believe in keeping an open mind and respecting others’ beliefs, but I would like to know before I waste a month getting indigestion at The Cheesecake Factory if the person I am eating with believes in things like “legitimate rape.”

On my first date with Aaron I broke every rule. Blind dates are supposed to last an hour or two, only long enough to gauge if you would like to see each other again. Ours lasted until last call. I drank too much, cursed like a sailor, and went into a long rant about religion.

He asked me out again.

Aaron was cute. He was thoughtful, smart, and even my most discriminating friends would pinch me and mouth “I like him” after meeting him.  He accepted me for exactly who I am; I didn’t have to pretend to be someone else or play games. Aaron had almost every characteristic on my dating wish list, but I still had lukewarm feelings about him.

I felt if I gave him a chance and gave my heart time, I would come around.  My friends protested that without an instant spark there would be no fire. I disagreed and pushed on.

Aaron and I started to see each other regularly and got into a routine of meeting up with my friends after work. Everyone loved Aaron, but after a month of steady dating I still only thought of him as a friend. Aaron didn’t push me. I don’t mean the way my exes pushed me, or pushed my buttons, just to get a reaction out of me and see me erupt in an Irish banshee wail. I mean Aaron didn’t challenge me. We didn’t share any passions. Aaron was smart but disinterested in intellectual debates. He had a wonderful sense of humor but didn’t make jokes. He was a great guy, just not great for me.

I was starting to feel like a jerk dating Aaron, occupying his time when he could be seeing someone who appreciated him. After one date we sat outside in his car and I told him that I only thought of him as a friend.  He said he didn’t want to give up and kissed me. This just made me feel worse.

There are good ways and bad ways to break up with someone. I chose a bad way. If I were a logical person, someone who could talk about her emotions without squirming and wanting to vomit, things might not have ended the way they did. I could have just said we gave it a shot but we just weren’t going to work. Instead I made up some elaborate lie to get away from Aaron in the middle of a date and dragged half a dozen people into my scheme. I told him I was locked out of my apartment, my dog was sick, I was upset, and I just wanted to be alone. I said I was leaving, and he should leave too. Because he is a wonderful guy, Aaron offered to wait outside my apartment with me until I could get inside. I dramatically hid my face so he couldn’t read the lies there, and told him I was just too upset. I needed to be alone, and my half-a-dozen friends were going to take me home, so I could be “alone.”

After I convinced Aaron to go home, instead of leaving I moved fifteen feet to another table with my friends. I felt awful. I received a text from my ex almost immediately after.

“Yep. Are you just figuring this out now?” He sent back.

I broke up with Aaron in the most cowardly way possible. I know this. It was a horrible thing to do, but the experience itself was filled with realizations. My friend Joey, who initially pushed me down this path of blind dating and self-discovery, told me that in the end of my journey I would figure out that what I have been looking for wasn’t a relationship.

She’s right. I don’t want a relationship, not just any relationship. If I am in a relationship I want it to be because that person is right for me, not because I can’t stand seeing “single” on my Facebook status or because I fear the stigma of being a pathetic, lonely, thirty-year-old woman. What I discovered is I don’t fear being alone. What I fear is turning into a woman who is so scared to be alone that she settles or compromises herself to be with someone who isn’t right for her.

I don’t want the man I’m dating to be a defining characteristic. There is more inside of me than who has been inside of me.