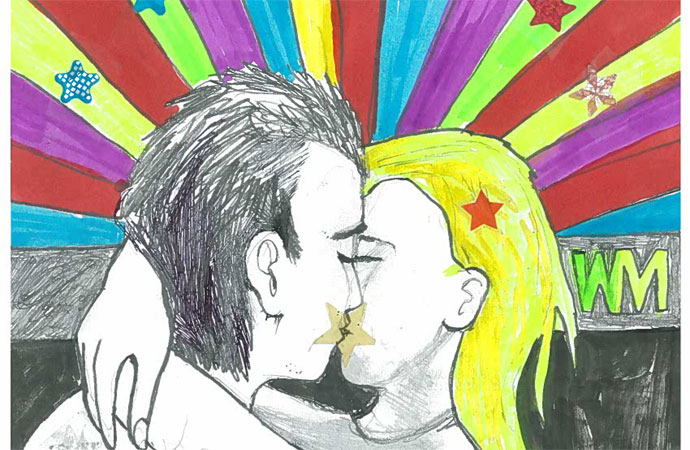 For every guy that I went out with in my blind dating adventure, there were dozens who creeped me out; the guys in the reject pile wore down my dating stamina quicker than any asshole boyfriend ever did. When internet dating was thrown into the mix, it made me feel like the emotional embodiment of Faces Of Meth: beat up and scabby with paranoid delusions that everyone was out to get me. In bars I was only subjected to whatever jerks were around at any given time, and even then they would have to face my reaction in person. Behind the safety of a computer screen these guys became the goatse of dating.

One Saturday morning I awoke to a message on an internet dating site from someone I can only assume is an ex, disguised by a beer can avatar.

Beer: Screw you Jayne. I guess this is where you find your hipster boyfriends.
Me: Which douchebag are you?

Normally I really like beer. It doesn’t always treat me nicely in the morning, but at least I know which beer did it to me.

A message from a twenty-one-year-old fireman started on a positive note, but I have no interest in dating someone nine years my junior. So I politely declined his request for my phone number. He swore he would show me the time of my life. At thirty I have had “the time of my life,” and––not to throw around Dirty Dancing references haphazardly––this dude was not going to be my Swayze. I told him it wasn’t going to happen. He responded with an onslaught of insults. He called me shallow, stupid, closed-minded, and finally he went for the one-two-punch to any ex-suburbanite white girl, fat and ugly. Before I could inquire to why he would be so persistent in asking out someone so obviously flawed, he blocked me. I suppose some mysteries are meant to remain unsolved.

Not all of the messages I received were unsolicited. I contacted “aarontilicious” first. He seemed like an attractive guy with varied intellectual interests. My message was simple:

Me: Hey. I’m Jayne. Looks like we have a lot in common.
aarontilicioius: Hi Jayne, it looks like you have a great rack! Does the carpet match the drapes? Spit or swallow?

Sometimes the guys weren’t jerks. Sometimes they were just trolling Internet dating sites for someone to live out a fantasy with them, and I was a jerk.

Kissyourshoes: Wouldn’t it be great to have someone you could just order around?
Me: No.
Kissyourshoes: Well if you find the idea growing on you, look me up. =)
Me: No.

I have no desire for a ready-made emasculated man. From what I gather from sitcoms, emasculation naturally happens over the course of many years of marriage with end result being mutual disgust. I know better than to fuck with nature. Although I was disinterested, my girlfriends were lining up for his number. I have no doubt that he has found someone. I’m just happy it’s not me.

RQ75 had a different approach to coerce me into participating in his kink:

RQ75: I get turned on when women wear stockings and heels. Do you wear that when you wear skirts?
Me: I usually just wear sweat pants all the time[1].
RQ75: hypothetically, would you be turned on if a guy lifted your skirt, ripped the crotch of your pantyhose and had sex with you?
Me: That would be hard with the sweat pants and all. Unless they were the holey ones with the chicken wing stains on them.
RQ75:We should hang out. What’s yr number? I’m James btw.

I don’t really think RQ75 was getting turned on that I lay around in sweat pants all the time watching Law And Order SVU while gnawing on chicken wings like a buzzard[2]. I also don’t think he was actually reading the messages I sent him. I think RQ75 was just beating off, happy to hear the ting of a reply on his computer, no matter what the message said.

The coup de grâce that sent me running from internet love with my laptop clutched to my breasts was a series of creepy messages from a blank profile describing how he was stalking me and moving closer and closer to my physical presence. The final message told me to “look outside my house.” I knew this was a bluff, because like any self-respecting, maladjusted single person, I was not home on a Friday night. I was getting tanked at a bar.

Recently a woman called in to Dan Savage’s podcast wondering where she could find a man. He told her to look to the internet and to go to bars. Which I agree with, but at the same time I wanted to scream out “look around good woman! Unless you are at a huddled inside eating yogurt out of a tube watching Here Comes Honey Boo Boo there are people around you and probably somewhere around fifty percent of them HAVE MALE GENTIALS!”

I know this from experience.

Last summer, I met a boy late at night by a dumpster. I didn’t see Dumpster Boy at first. He snuck in through my peripheral vision, but before I knew it we were sharing a beer by the dumpster. A few beers later we were making out, pressed up against my front door, until I realized I was in the wrong building. “My front door” was actually my neighbor’s door.

In my defense, all the buildings in my complex look the same[3].

A few weeks ago I was almost sideswiped by a truck while the passenger tried to hand me his number. To be honest, it wasn’t because I was cute. It wasn’t because my car is awesome (a beat up 2005 Camry does not make the boys come-a-runnin’). It was because they were drunk.

Half this world’s population is male; this earth is just crawling with penis-havers. I felt like I could find a decent one somewhere, but as time went by those places seemed to be dwindling. Most happily-married people I know met their spouses at work. I don’t have any coworkers, unless you count my dog that spends most of his day eating strange things, licking himself, and shoving his body between me and me and my computer. To make things worse, my two favorite places to hang out (gay bars and strip clubs) aren’t exactly safe havens for nice, available, straight men. But I still believed that love could happen anywhere.

I decided to test my own theory and go to the two most stereotypical meeting places I could think of.

While living with my ex I once complained about how many men hit on me at the laundromat. His explanation was that the saturation of random meetings in pop culture set at laundromats condition people to think of it as a Downy fresh hub of love.

This was not the case on my last visit.

Perhaps it was because the only men that were there were working and a man with really strange scabs on his face who smelled of rotting meat and body odor putting his shoes in the dryer with a whole box of fabric softener.

Anytime you leave the house you should dress up––or just get dressed. I realized this after an attractive man near the protein shakes looked me up and down while I was wearing my Easter Bunny pajama pants and a shirt that read “Can’t Get No Satisfaction.” I wanted to spark a conversation, but the disgusted look on his face said it all.

This isn’t a rule that only applies to dating. This is a rule for life: don’t look homeless if you have a home.

I toyed with the idea of revisiting the grocery store wearing a dress and high heels, but the idea of wobbling around produce while rubbernecking men just made me feel stupid. I was happy the way I was. The more I worked on finding someone, the less I cared about meeting a guy, and the more I found that I was happy being myself.

Though I did promise myself I would wear actual pants the next time I left the house.

I was beginning to feel like the only bad part about being single was dating.

[3] Surprisingly, this boy I met near a bin of trash had his shit together. He was a good old fashioned “on paper” winner. He loved his (unbelievably rich) family and owned not one, but two, businesses.